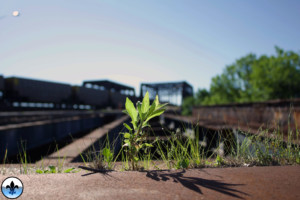 Route 66 was immortalized by John Steinbeck who called it “the mother road” in The Grapes of Wrath.  It inspired a hit song (“Get your kicks on Route 66”) and a TV show (“Route 66”).  The Phillips 66 Company is named after Route 66, where it first tested its gasoline.  Frank Lloyd Wright called it “a giant chute down which everything loose in this country is sliding into southern California”.  It was the most iconic American highway and lucky for us, it passed through St. Louis on its way from Chicago to Los Angeles. 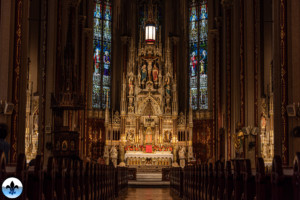 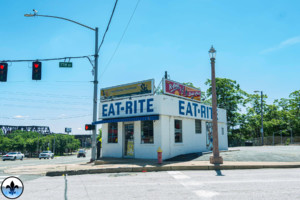 In the dawn of the automobile age, facing a growing number of people who were all motorized with nowhere to go, President Woodrow Wilson and Congress created a new federal agency – The Bureau of Public Roads – initially to help the individual states improve their roads, but ultimately to define a national highway system.  It was mostly a patchwork of existing local and state roads that were connected and upgraded to federal standards so that Americans could eventually navigate from city to city and even from coast to coast on paved roads.  Bureau chief Thomas Harris MacDonald, who earned his position based on his success as Iowa’s state highway commissioner, boldly proclaimed:  “We will be able to drive out of any county seat in the United States at thirty-five miles an hour and drive into any other county seat – and never crack a spring.”

When the US highway system was laid out in 1926, what is now Route 66 was initially to be named Route 60.  However, the governor of Kentucky objected.  He demanded that 60 be used for a highway in Kentucky because numbers ending in zero were reserved for the most important highways, and he wanted a very important highway in his state.  The bureau relented and agreed to use 62 instead – until someone suggested that 66 had a better ring to it.  And that is how Route 66 got its name. 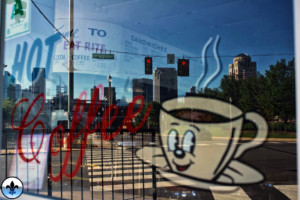 The Great Depression and then the Dust Bowl soon followed in the 1930’s, causing a mass migration of nearly 3.5 million people in the Great Plains states.  More than a few ended up on Route 66 heading to California in search of work, like the fictional Joad family in The Grapes of Wrath.

Recovery and prosperity came in the 1940’s, and increasingly affluent Americans had more leisure time and more automobiles.  Route 66 turned into a vacation corridor lined with neon-signed motels, restaurants and gas stations.  It reached its zenith in the 1950s and it epitomized mid-20th Century American culture for better or for worse. 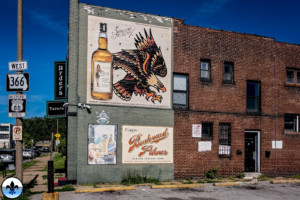 All good things must come to an end, and during the 1960’s Route 66 was replaced by the faster and safer interstate highway system.  But not without a cost.  In 1962 John Steinbeck predicted that “it will be possible to travel from New York to California without seeing a single thing.”

This isn’t just about sightseeing.  The interstates, along with increasingly accessible airline travel, have made it possible for us to hop from city to city, disconnecting us from the small towns and farms that were the heart and soul of our nation.  Could this be a contributing factor to our growing political divide?  The irony is that Charles Henry Davis, president of the National Highways Association, one hundred years ago predicted that highways would “bind the states together in a common brotherhood, and thus perpetuate and preserve the Union.”  Did highways like Route 66 bring us closer to that vision before the interstates steered us away from it? 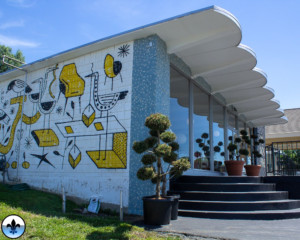 Another cost of the interstate highway system has been the unintentional but substantial collateral damage to the physical and social fabric of the large cities, including St. Louis.  And this has been one of PFSTL’s recurring themes.  We started exploring this in several previous articles, and we will continue to do so in some of our future articles.  The irony is that interstates were not forced upon the cities by an oppressive federal government.  In fact, inner city freeways were not in the original federal plan, which was intended for transportation between cities, not within.  But the bill failed to pass on the first attempt.  Urban congressman wanted a piece of the action, so freeways were added to get their needed votes.  It took years before they realized what they had done and to begin to pass laws to better manage future projects. 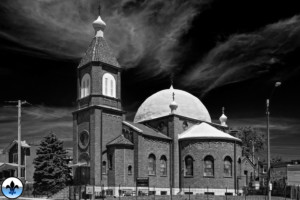 It is human nature to not know what you had until it is gone.  Years since it was discarded, there has been a renaissance of interest in Route 66.  Individuals and groups have tried to save some of the quickly disappearing neon signs and other relics.  Photographers and nostalgia seekers make pilgrimages down its remnants.  There are several different travel guides and maps to help with this.  Or you can live vicariously through books about Route 66, such as the beautifully photographed “Route 66 Sightings” (by Jerry McClanahan, Jim Ross and Shellee Graham; 2011).

This article will take you down our short stretch of Route 66 in south St. Louis city and county as flows from the Mississippi River and over the River Des Peres until it merges with the river of concrete known as Interstate 44. 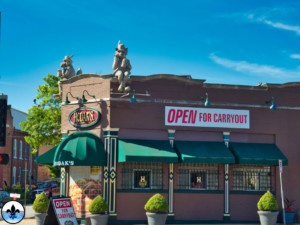 Over its long history there were many major and minor re-alignments of Route 66, and it would be impractical to cover them all.  For our purposes we chose the so-called the MacArthur Bridge alignment.  The MacArthur Bridge was built in 1916 as the first free crossing of the Mississippi River in St. Louis.  Originally named the Municipal Bridge, it was renamed during WWII in honor of the famous general.   It carried Route 66 traffic until 1955 when the route was shifted to the MLK Bridge, then known as the Veterans Memorial Bridge, and finally to the Poplar Street bridge in 1967.  By 1972, Route 66 had been replaced by the interstates.

The MacArthur Bridge is no longer open to vehicular traffic, and the remains of its abandoned automobile ramp (first photo in this article)  ends a very short distance from the tiny but iconic Eat Rite Diner at 7th St & Chouteau Ave (third and fourth photos in this article).  That will be our starting point. 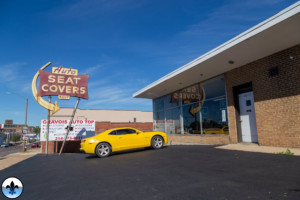 We will soon take a left on Tucker Blvd and proceed south, with LaSalle Park still on our right, but Peabody Darst Webbe (http://www.photofloodstl.org/photo-flood-57-peabody-darst-webbe/) on our left.

Next up is the sprawling Interstate 44/55 interchange.  As we pass underneath the very same freeways that made Route 66 obsolete, we briefly penetrate the northwest edge of Soulard (http://www.photofloodstl.org/photo-flood-3-soulard/).

With the interstate in our rear view mirror, we now find ourselves cruising southwest on Gravois Ave (aka Highway 30), separating McKinley Heights (which we will visit in the near future) on our right and Benton Park (http://www.photofloodstl.org/photo-flood-14-benton-park/) on our left.  Gravois was the first road in the city, and the state, to be paved with concrete.  August Busch Sr. paid half the cost to have the paving extended from the city limits to his estate at Grant’s Farm.

As we pass Benton Park West (which we will visit in the near future) on the left, we first pass Fox Park (http://www.photofloodstl.org/photo-flood-62-fox-park/) on the right and then Tower Grove East (http://www.photofloodstl.org/photo-flood-8-tower-grove-east/).  The spectacular St. Francis de Sales Oratory cathedral, 2653 Ohio at Gravois, is worth stopping for a closer look.  The photo below is the exterior, and the second photo in this article is the interior. 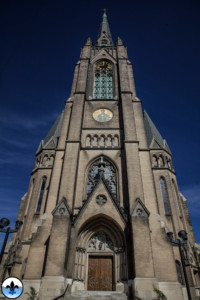 The last neighborhoods in the city are Lindenwood Park (http://www.photofloodstl.org/photo-flood-59-lindenwood-park/) on the right, which includes the iconic Donut Drive In (est. 1953) at 6525 Chippewa (previous photo); and St. Louis Hiils (http://www.photofloodstl.org/photo-flood-25-st-louis-hills/) on the left, which includes the wildly popular Ted Drews Frozen Custard (est. 1941) at 6726 Chippewa (next two photos).  These are two of the very few surviving icons of Route 66 that will give you a taste of its heyday. 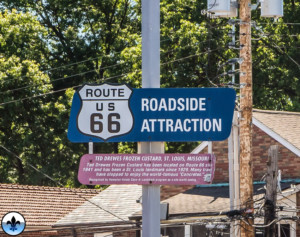 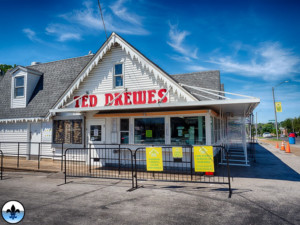 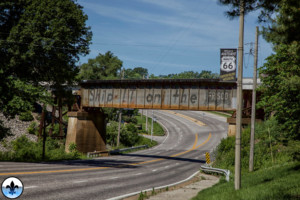 After crossing the River Des Peres Blvd and Greenway, we leave the city and enter the county, where Chippewa Street becomes Watson Road.  Shrewsbury  http://www.photofloodstl.org/photo-flood-81-shrewsbury/ will be on our right, and Resurrection Cemetery on our left. 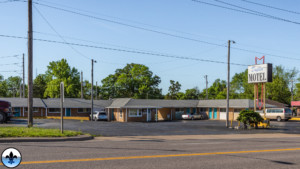 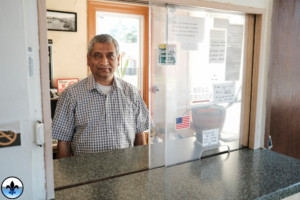 Next we cut through the tiny municipality of Marlborough, which was the home of the most famous (or infamous) point of interest on our stretch of Route 66:  the Coral Court Motel at 7755 Watson Road.  John Carr opened his motel in 1942 with 10 buildings containing two units each.  Business was good, and he added more units in 1946 and again in 1953.  After Interstate 44 opened in 1972, business declined significantly on Route 66, but he kept the property well maintained until his death in 1984.  Unfortunately, his widow allowed the property to deteriorate badly.  In 1995 it was demolished and replaced with a generic suburban neighborhood.  However, the original stone entrance walls remain (next photo).  There were many motels along Route 66 and only a few remain (previous two photos). 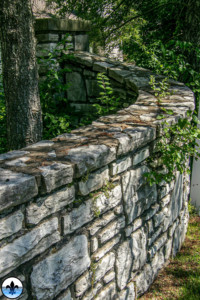 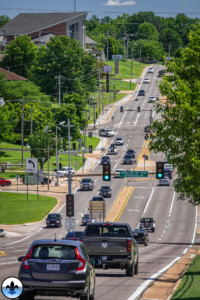 On our right is the southern border of Webster Groves http://www.photofloodstl.org/photo-flood-83-webster-groves/.

We then bisect Crestwood and drive past the now-vacant site of Crestwood Court which was the first major mall in the St. Louis area when it opened in 1957.  As this article was being written, we learned that the ambitious re-development plan has been abandoned.  https://www.stltoday.com/business/local/crestwood-plaza-mall-site-developer-backs-out/article_15df4edf-7f5f-5dc2-a8c0-95738a33a3cf.html 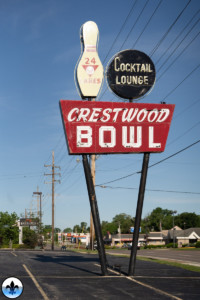 After a brief incursion into north Sunset Hills, Watson Road / Historic Route 66 / Highway 366 merges into Interstate 44, which replaced (and in places, overlaid) the old Route 66.  That is the end of today’s history lesson but for extra credit, keep driving southwest on I-44, and after you cross the Meramec River, stop for a visit at the Route 66 State Park https://mostateparks.com/location/56376/visitor-center.