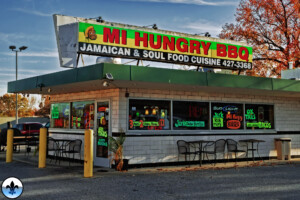 St Charles Rock Road is a major thoroughfare in northwest St. Louis County, and many relics of its long and glorious history are still visible. Before we explore, here’s a little historical background…

St Charles Rock Road was the first road to traverse St. Louis County. By 1772 it had become the main connector between St. Louis and St. Charles, and in 1796, it was depicted on a map for the first time by French explorer Georges Henri Victor Collot.

On 20 May 1804, Capt. Meriwether Lewis reached St. Charles, the expedition’s last “civilized” stop, via St. Charles Rock Road to meet up with Lt. William Clark. The Lewis and Clark Expedition then officially began.

In the 1800s, the road furnished access to the Santa Fe Trail and Oregon Trail for the many westbound wagon trains that were outfitted in St. Louis. 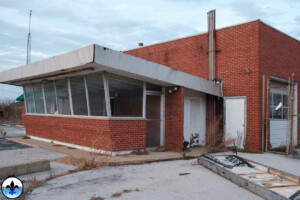 About 1817, the settlers using the road west were mostly from Kentucky and Tennessee. During October of that year, no less than 270 wagons and four-wheeled carriages, and 50 two-wheeled carriages and carts passed along the road, taking not less than 3,000 people into Saint Charles County. It was estimated that some 12,00 settlers preceded them at a rate of about 20 wagons a week for a period of nine or ten weeks.

In 1837, the Road was incorporated and became a Turnpike. It was to be kept open at least eighty feet wide. The company would be permitted to erect three toll gates. The rates were not to exceed the following:
For each man and horse 6 1/2 cents
For each loose horse 4 cents
For each four wagon team 30 cents
Each pleasure carriage 30 cents
Each head of cattle 2 cents
Each sheep, hog or other animal 1 cent.

In 1865, it officially became the St. Charles Rock Road. So named because it had been “macadamized” meaning that multiple layers of gravel were tamped down after being laid.

Tollbooths were put in place to pay for upkeep, but by 1919, the Post reported, it was one of the worst roads in St. Louis County, “full of bad holes and ruts, making driving either in automobiles or horse-drawn vehicles unpleasant at day time and actually dangerous at night.”

Prior to construction of the highway bridge across the Missouri River, the “St Charles, St Louis and Western” trolley line, which ran alongside the Rock Road, ended on the St Louis County side, and ferries crossed the river. Bridge construction began 8/01/1902 and contractor was ordered to finish in time for the world’s fair. The first streetcar crossed on 4/23/1904. It was a toll bridge until 1931 when a group of citizens purchased the bridge and turned it over to the State Highway Department, which made the bridge toll-free.

It was replaced as the main route to St. Charles in 1958 when nearby I-70 opened (which was later supplemented by the Missouri Route 364 freeway to the south and 370 to the north),

Now, let’s go for a ride and see what we can find…

We are exploring a 12.1 mile stretch of nearly straight road from Lucas-Hunt Rd (the Wellston/Pagedale border) (where it changes from Dr Martin Luther King Dr to St Charles Rock Rd), west/northwest until it ends at Missouri Bottom Rd (just shy of the Missouri River in Bridgeton). (MLK will be the subject of a future mini-flood.)

We start our westward journey in the municipality of Pagedale in St Louis County, with a population of about 3300. Normandy High School (pictured above) is on our right and the Bethany Section of St. Peters Cemetery is on our left. This is the first of several cemeteries we will see because in 1823, it became illegal to dig a grave within the St. Louis city limits, and cemeteries sprang up along roads leading out of the city, especially the Rock Road.

A little further down we cross into the small municipality of Greendale, population 651, with Zion cemetery on the right and unincorporated St. Louis County with Laurel Hill Cemetery on the left.

Then we cross into the municipality of Bel-Nor on the right, which has a population of around 1400 and was the site of the events that were popularized in “The Exorcist”, and there on the right we see  Lake Charles Park Cemetery (pictured above).  On the left is still unincorporated St. Louis County, and there we see Oak Park Cemetery (pictured below). 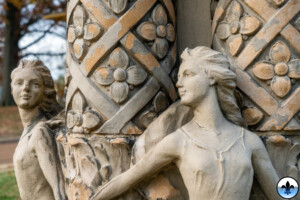 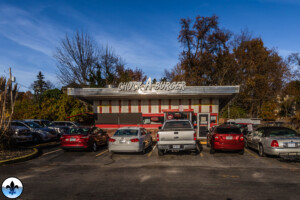 Now we travel under I-170, leaving most of the cemeteries behind, and entering a more commercial and more densely populated part of the county.

St. John is on the right (above and below).  On the left, Charlack, then Breckinridge Hills. 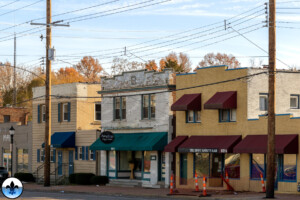 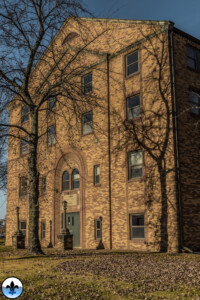 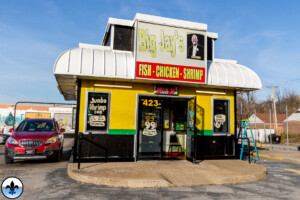 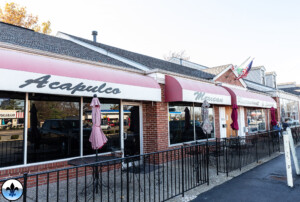 Next, we bisect historic St. Ann (above and below), with a population of around 13,000.  According to the city’s web site, in 1942 “Charles F. Vatterott, the developer and builder of most of the residential and commercial properties in St. Ann, started the community as a housing project for families of workers employed in nearby defense plants. It was one of the few defense housing projects in the country to develop into a permanent town.” 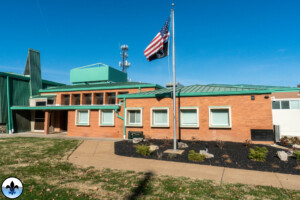 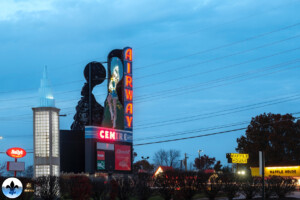 There are many landmarks on our route, but we have time to mention only a few – such as the iconic Airway Drive-in (above and below) which opened on September 21, 1948 with Walt Disney’s “Song of the South” and closed on November 2, 1986 with “Trick or Treat”, “Maximum Overdrive”, “Sky Bandits”, and “Teen Wolf”. In 1992, the drive-in was demolished and replaced with the Airway Center shopping center. The sign was restored and adapted for the shopping center, mainly a Shop-n-Save grocery store that became a Schnucks and is now vacant. 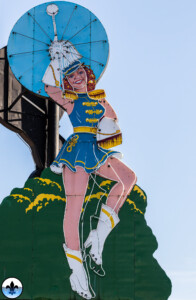 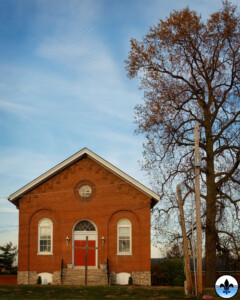 Crossing under Lindbergh Blvd, which once carried part of Route 66, we enter Bridgeton (above).  Formerly the most populous city on the Rock Road, its population surged from about 200 in 1950 to about 20,000 in 1970 during a residential housing boom in the ‘50s and especially the ‘60s. It has since declined dramatically, due in part to an extremely expensive and largely unnecessary airport expansion.

Branneky Hardware (below), another local icon, has been on this site since 1857.  This is the third building, the first two burned down and were rebuilt.  Their web site even has a page dedicated to their history:  http://brannekyhardware.com/our-history 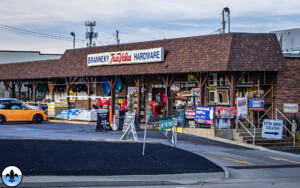 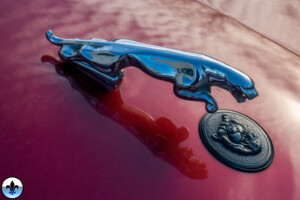 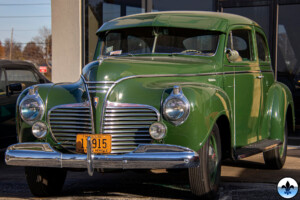 Crossing over I-70 (below), we continue our journey westward, passing numerous shopping centers and other retail establishments. 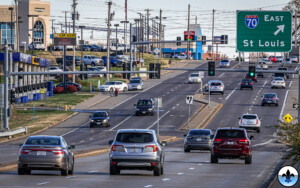 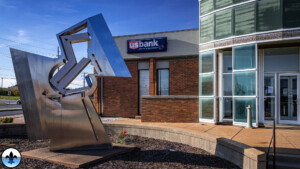 Just before we reach I-270, we notice a rather large US Bank branch (above) on the right, with a rather large piece of metallic contemporary sculpture in front, so we stop to investigate.  It turns out this was a branch of Mark Twain Bank, which was bought out by Mercantile Bank in 1997, which in turn was bought out by Firstar, now known as US Bank.  We could not find any specifics about the artwork however we did learn that one of the co-founders of Mark Twain Bank, Adam Aronson, was also one of the co-founders of the Laumeir Sculpture Park. For more information about Mr. Aronson: https://stljewishlight.org/obituaries/banker-leaves-legacy-of-art-civic-projects/

After we pass under I-270 we enter an industrial area (still in Bridgeton), which includes the West Lake Landfill Superfund Site.  Finally, we slid by Earth City to the end of the road just before the Missouri River (when it turns right into Missouri Bottoms Road.) 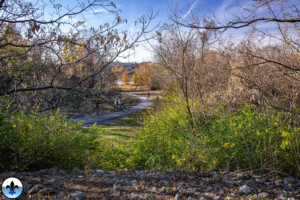 But just before the end, you will see the Missouri Greenway – Riverwoods Trailhead on the left, and if you stop there, you will see a path that leads to the river.  You will also see a short stretch of pavement that was the old St. Charles Rock Road bridge approach.  If you stand at the end (above) you can see over the river and into St. Charles where the bridge once ended.  And that is the end of our journey and our story.  Thank you for riding along!