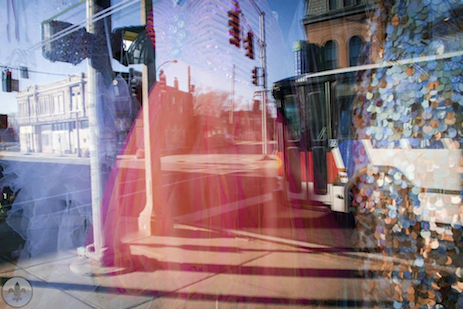 Forest Park Southeast is a play on identities. Once a rural respite for city dwellers, it is now firmly encompassed by urban core. Once disconnected from the commerce and transportation mechanisms of the area, it now features one of the fastest growing entertainment districts and includes two interstates and a railroad in its borders. What’s more, the neighborhood north of Manchester is wholly distinct in character from the neighborhood south of it. Nonetheless, FPSE offers one of the more distinctive collections of architecture on the city’s South Side (from turn of the 20th to turn of the 21st century buildings).

No doubt, St. Louis is a city with a long history (by American standards) that is extremely variegated. A short list of those events which created massive impacts on the look and feel of the city is as follows: Initially, the city grew north and south from Downtown, along the Mississippi River (with the noted exception of those routes out of the city that led to either Catholic settlements, trade posts, or military forts). When immigration to the city from Europe exploded in the early to mid 1800’s, this north/south growth was accelerated, as was growth along those aforementioned routes, (St. Charles) Rock Road, Broadway, Manchester, Gravois, etc. During mid-century, railroad infrastructure received a dramatic boost, and development (especially industrial) occurred along those routes. The introduction of street cars lines and concerted city-planning helped to establish new residential areas and growth west of Downtown; Forest Park was a result of this effort. For the century between 1850 and 1950, city neighborhoods tended to possess the characteristics of their inhabitants (ie. German, Irish, African-American, etc.), a reality bolstered by institutionalized segregation practices. During this same time, the City seceded from St. Louis County, which would significantly impact it during its period of overall decline, a century later. In 1926, Route 66 was opened, and businesses catering to travelers thrived along its connections throughout St. Louis. However, when the Interstate Highway System was implemented after 1956, the earlier Road was usurped, and a steady decline of those Route 66 businesses began, causing populations of people to relocate. The impact of the Interstate was also felt in the destabilization of the neighborhoods that it bisected. After World War II, “White Flight” and the overseas relocation of manufacturing jobs reversed two centuries of steady growth for St. Louis, creating the platform for the current conditions of the city.

As Washington University’s Medical Center Redevelopment Corporation states in their FPSE Welcome Packet, the neighborhood began auspiciously as a country retreat for city dwellers, named Rock Springs (an apparent reference to a spring source, at present-day Vandeventer Avenue, for nearby Chouteau’s Pond). This was in the early days of St. Louis, when culture was still dominated by French-Creole influence, and before the first wave of European immigrants. The cholera outbreaks that marred life in St. Louis between 1830 and 1850 resulted in the removal of the Mill Creek (or La Petite Riviere) dam that created Chouteau’s Pond. Drained of water, the Pond, which had become a veritable cesspool for industrial and animal waste, faded into distant memory, yet the Rock Springs “resort” found new reasons to prosper.

The same industrial runoff that had spoiled the bucolic conditions of Chouteau’s Pond spelled growth for Forest Park Southeast as the railroads began to build their lines west from St. Louis. Benefiting from this, the neighborhood (billed originally as the city’s “first subdivision”) joined a network of industries along the railroad that would include Scullins Steel in Ellendale and the Cheltenham brickmakers north of The Hill. What’s more, the State’s capital had moved to Jefferson City by 1821, and the route designated to connect it to St. Louis included Manchester Avenue. For these reasons, industry has always been strong in Forest Park Southeast, which is why it possesses such longstanding operations as Thomas Coffee Company (once rounding out a collection of coffee roasters in the neighborhood that included Chock full o’Nuts and Kaldi’s Coffee Roasting Company) and partially why it is so capable of attracting new businesses, like Urban Chestnut Brewery (built a massive new facility here in 2014). The neighborhood south of Manchester is characterized by this early industrial growth in the form of the shotgun-style dwellings and smaller homes that dot the area, and housed a multitude of factory workers.

After Forest Park was founded just to the northwest, a new type of resident found their way to the neighborhood. This resident was propelled by commercial business prospects along Manchester Avenue, a possibility made real by the expanding street car lines and the city’s revived focus on its western border. By the early 20th century, most of the former rural area in Forest Park Southeast had been developed, and the neighborhood had a long-thriving manufacturing corridor and a budding commercial business district to show for it. The Louisiana Purchase Exposition of 1904 helped to solidify Forest Park Southeast as an in-demand, and less costly (compared to its northern neighbor, the Central West End) place to live. When the infamous Route 66 opened in 1926, it included Manchester Avenue among its connectors in St. Louis. This inclusion led to what is, undoubtedly, the neighborhood’s most prosperous period, between 1930 and 1950. After this time, the city’s population declined as a whole, and Route 66’s commercial promise was lost in the long shadow of the Federal Highway Act of 1956.

Today, the neighborhood is on the rebound, and sustains a redevelopment effort known as The Grove, which is one of the most exciting entertainment districts in the city. For more than a decade, The Grove has been attracting a diversity of businesses ranging to include art galleries, cafes, architecture firms, and nightclubs. The revitalization of the former Manchester commercial corridor seems very well under way. Restoration Saint Louis owns more than 60 properties throughout the neighborhood, and is focused on providing sustainable business and living conditions for the community. UIC (the eco-conscious in-fill developer discussed in our Botanical Heights post) also has projects in the area. In addition, Forest Park Southeast has a well-organized and focused neighborhood association which encourages anyone looking in to feel extremely positive about the future of FPSE. Don’t get too caught up looking into the future of the neighborhood though, because its present is already a lot of fun to behold.

Our endpoint for the day was Rise Coffee House. It is easy to see that this cafe is firmly committed to Forest Park Southeast and the St. Louis community beyond. The business offers a range of excellent coffee products, savory dishes, and delicious baked goods that are all produced locally. The staff was very pleasant and kind, even despite our small army of photographers commandeering almost their entire second floor seating area. If you have not yet been to Rise, we strongly recommend that you go; this is a place that you will feel good about patronizing.