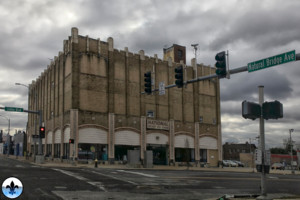 Natural Bridge Road – so named because it once utilized a natural limestone bridge to cross over Rocky Branch Creek in the city – is one of the original (1840’s) major thoroughfares of north St. Louis, starting deep in the city and making a nearly straight northwest trajectory to Normandy, and then (later) to the airport.  In doing so it touches 11 neighborhoods in the city and 9 municipalities in the county, like a river that exposes numerous layers of rock as it carves a canyon out of the earth.  It is interesting that Natural Bridge does not penetrate any of those 11 city neighborhoods; rather, it serves merely as a border between them.  In the county, it also serves as a border between some municipalities, but there are also several that it bisects. 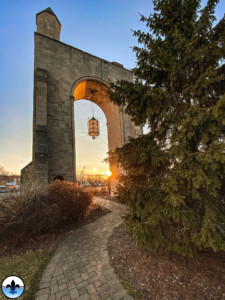 Natural Bridge is a veritable gold mine of photo ops, but they are spread out all over this 9.3. mile road instead of being concentrated in a stretch of about a mile as, for example, in the The Loop or The Grove.  So, we did something a little different this time.  Our photographers drove the road and stopped at various buildings or blocks that caught their eye.

This narrative will start in the city and work its way west.  After all, St. Louis is the gateway to the west. 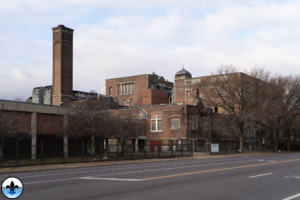 “Once a prominent neighborhood for German immigrants to the city, St. Louis Place has since fallen onto hard times.”  But, “Exploring St. Louis Place on foot with a camera is one of the most rewarding experiences in all of St. Louis, both because of visual variety and the friendly people that you meet there.”  Please read more here: http://www.photofloodstl.org/photo-flood-41-st-louis-place/. 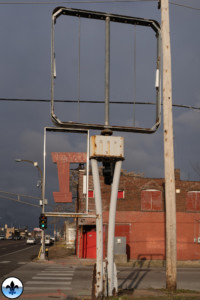 Incidentally, a significant portion of St. Louis Place was razed for the new NGA campus.  Some hope that this will help revitalize the surrounding areas.  As we learned from our walks on Kingshighway (http://www.photofloodstl.org/mini-flood-78-north-kingshighway/) and in The Grove (http://www.photofloodstl.org/mini-flood-76-the-grove/), the medical center has had an uplifting effect on the immediate surrounding areas.  However, that was due to the active involvement of Washington University Medical Center Redevelopment Corporation (WUMCRC) which was created and funded for that specific purpose.  There is no equivalent for the NGA project.  We plan to follow-up on this in future walks.

As we proceed down Natural Bridge, we pass the Fairground neighborhood (which we have not yet explored) on the right and the JeffVanderLou (http://www.photofloodstl.org/photo-flood-16-jeffvanderlou/) neighborhood on the left. 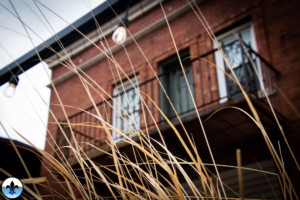 Baseball fans, please note:  On Natural Bridge at the northwest corner of JeffVanderLou is the now-closed Beaumont High School, whose 1944 baseball team included five players who would reach the major leagues, including Hall of Fame manager Earl Weaver and all-star Roy Sievers.  Hall of Fame member Dick Williams also graduated from Beaumont in the 1940’s.  And before the high school was built in 1926, this was the location of Robison Field, aka League Park, where the St. Louis Cardinals played until 1920 when they moved to Sportsman Park (aka Busch I).   League Park is where the famous pitcher Cy Young played for the Cardinals in 1899 and 1900.  Unfortunately for us, he accepted an offer to play for Boston when the rival American League was founded in 1901. 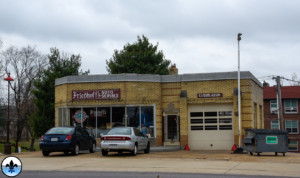 Across the street, on the right side of Natural Bridge, is Fairground Park (http://www.photofloodstl.org/photo-flood-23-fairground-park/)

Then, Penrose on the right  (http://www.photofloodstl.org/photo-flood-66-penrose/) and Kingsway East (which we have not yet explored) on the left.

Kingsway East is followed by Kingsway West (which we plan to explore in March 2020) and then Wells Goodfellow (http://www.photofloodstl.org/photo-flood-55-wells-goodfellow/).  Opposite of Kingsway West and Wells Goodfellow, on the right side of Natural Bridge, is Mark Twain I-70 Industrial (http://www.photofloodstl.org/photo-flood-43-mark-twain-i-70-industrial/) This takes us to the St. Louis city limits. 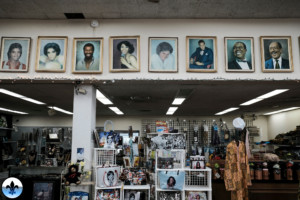 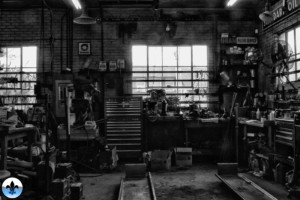 Mark Twain I-70 Industrial is an odd mix of military, commercial and abandoned industrial buildings.  But at one time was was a major GM manufacturing complex that was best known for producing the entire line of Corvettes until it was moved to Bowling Green, Kentucky.  Manufacturing employment in St. Louis fell all throughout the 70’s but it was a further shock in 1980 when GM announced it was abandoning its Corvette plant.  UAW leader Eldon Renaud claims that they met with officials at city hall and begged them for a competing offer but were brushed off.

During WWII, 105mm howitzers and DUKWs were manufactured here.  Although a series of fatal accidents of DUKWs used for tourism have tarnished their reputation, the fact is that when used for their intended purpose in combat, they served admirably. 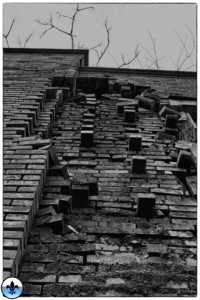 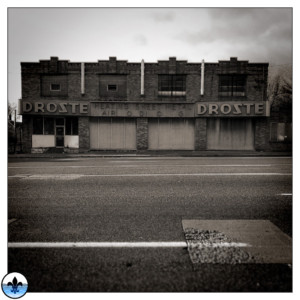 We now cross the city limits into the county.

Natural Bridge bisects Pine Lawn (pictured below).  We then pass Uplands Park on the left.  Next up is Northwoods on the right, and the tiny municipality (population 574) of Beverly Hills on the left.

Natural Bridge then bisects Normandy after it passes Lucas-Hunt Road.

The present city of Normandy rests on land that Anne Lucas Hunt (1796-1879) inherited from her father John Baptiste Charles Lucas (1758-1842) who named his vast land holdings after his native Normandy, France.  He was a US Congressman and confidant of Thomas Jefferson who became one of the three land commissioners of the newly acquired Louisiana Territory.  His only daughter Anne married Theodore Hunt and they had a son named Charles Lucas Hunt, named after Anne’s brother who was killed by Thomas Hart Benton in a duel on Bloody Island.  After Theodore passed away, Anne married his cousin Wilson Price Hunt, a (literally) trailblazing explorer.  Charles Lucas Hunt named his son Wilson Price Hunt after the boy’s step-grandfather.  This Wilson Price Hunt built a house at 7717 Natural Bridge Road in 1906 which still stands and is currently used as offices for a local family-owned construction company. 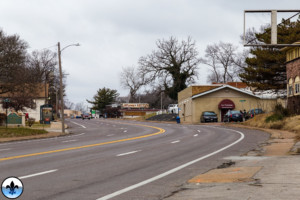 Probably the first thing you will notice when you enter Normandy is the dramatic entrance to Pasadena Hills on the right (please see the second picture in this article).  This is the tallest monumental entrance in St. Louis, a city known for monumental entrances.  But Pasadena Hills is a separate municipality that sets back from Natural Bridge, and the entrance is the only part that touches the street. 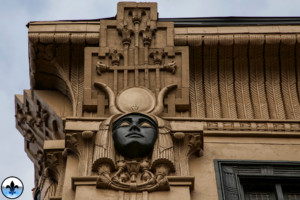 Deeper into Normandy, we encounter the University of Missouri–St. Louis (UMSL), on the former site of the Bellerive Country Club which relocated to West County in 1958.  The 128-acre grounds and club house were purchased by the Normandy School District for $600,000 to create a community college because many of their students could not afford a four-year college.  They renovated the golf course clubhouse to contain 15 classrooms, two laboratories, a large lecture room, a library and a cafeteria.  They partnered with the University of Missouri in order to acquire accreditation.  The campus quickly grew and merged in the University of Missouri system. 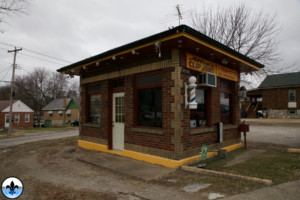 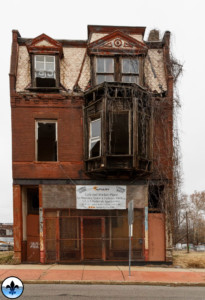 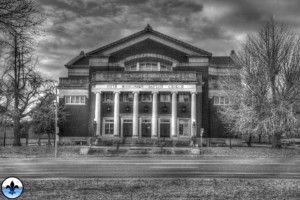 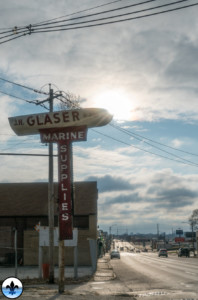 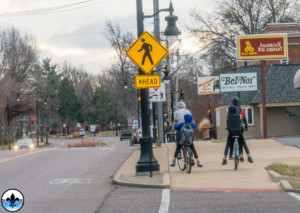 After it passes through Normandy, Natural Bridge separates Bellerive on the right and Bel-Nor on the left.  Then it bisects Bel-Ridge and crosses under 170 where it enters the southwestern corner of Berkley.  This last stretch is mostly routine commercial property except for Washington Park Cemetery (pictured below), a defunct African-American cemetery that has suffered from massive neglect, and encroachment by three major public construction projects:  Interstate 70, airport expansion, and the MetroLink light rail system.  The city of Berkley has recently taken over the cemetery, so we will need to revisit this later. 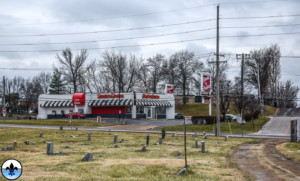 We have reached the end of the road when Natural Bridge merges onto I-70 at the St. Louis Lambert International Airport (http://www.photofloodstl.org/mini-flood-55-st-louis-lambert-international-airport/).

We hope you have enjoyed Natural Bridge.  We are looking forward to exploring more of the iconic streets of St. Louis.