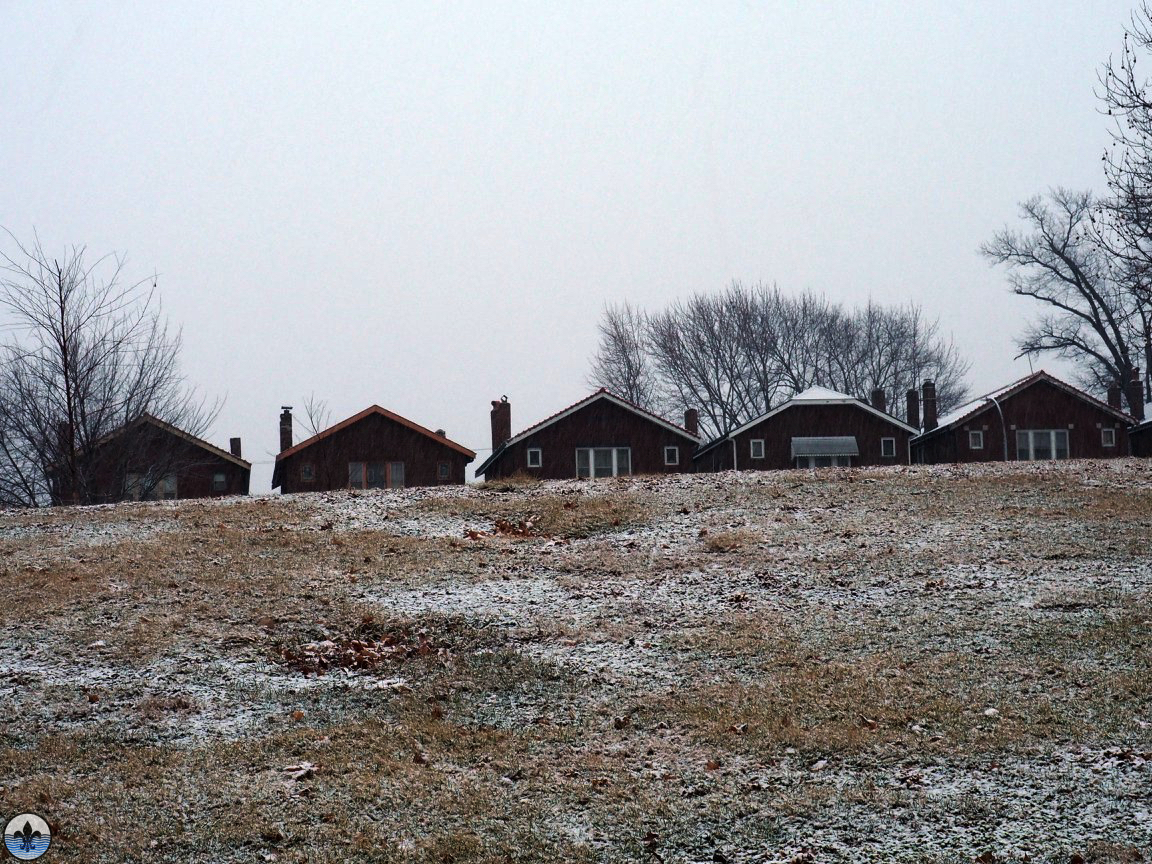 Penrose is another Northside neighborhood that was originally defined by German immigrants. After the end of forced segregation in the 1960’s, African-Americans began to resettle in Penrose, and are today its primary demographic. The neighborhood was most recently the focus of an attempt by Alderman Antonio French to make the area less restrictive to development. Today, it is a neighborhood in flux; somewhat troubled, somewhat hopeful, the future of Penrose (and many of its nearest neighbors) hangs in the balance, a swing that City Hall legislation has not been fully capable of tilting one way or the other. 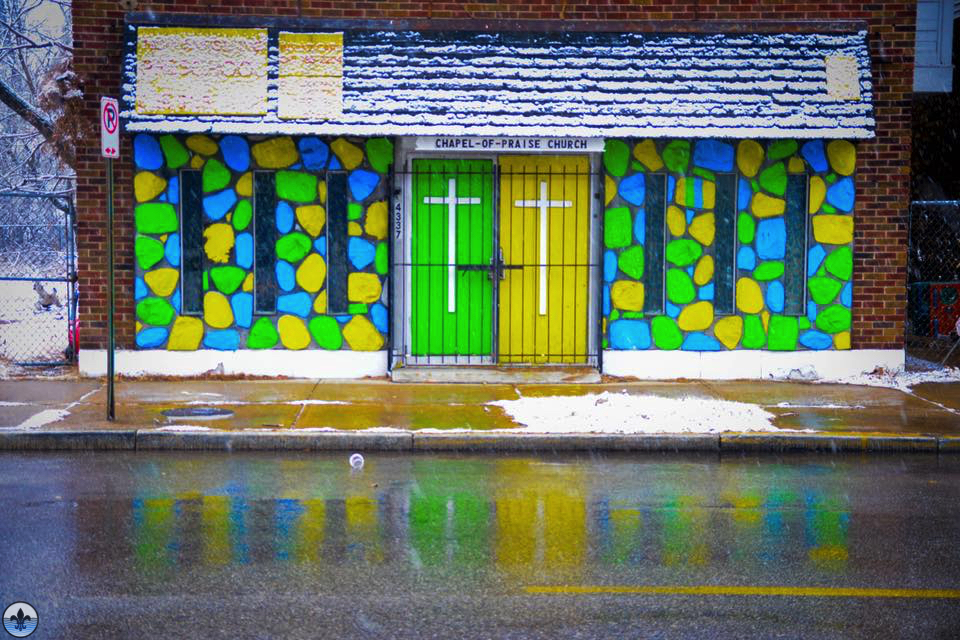 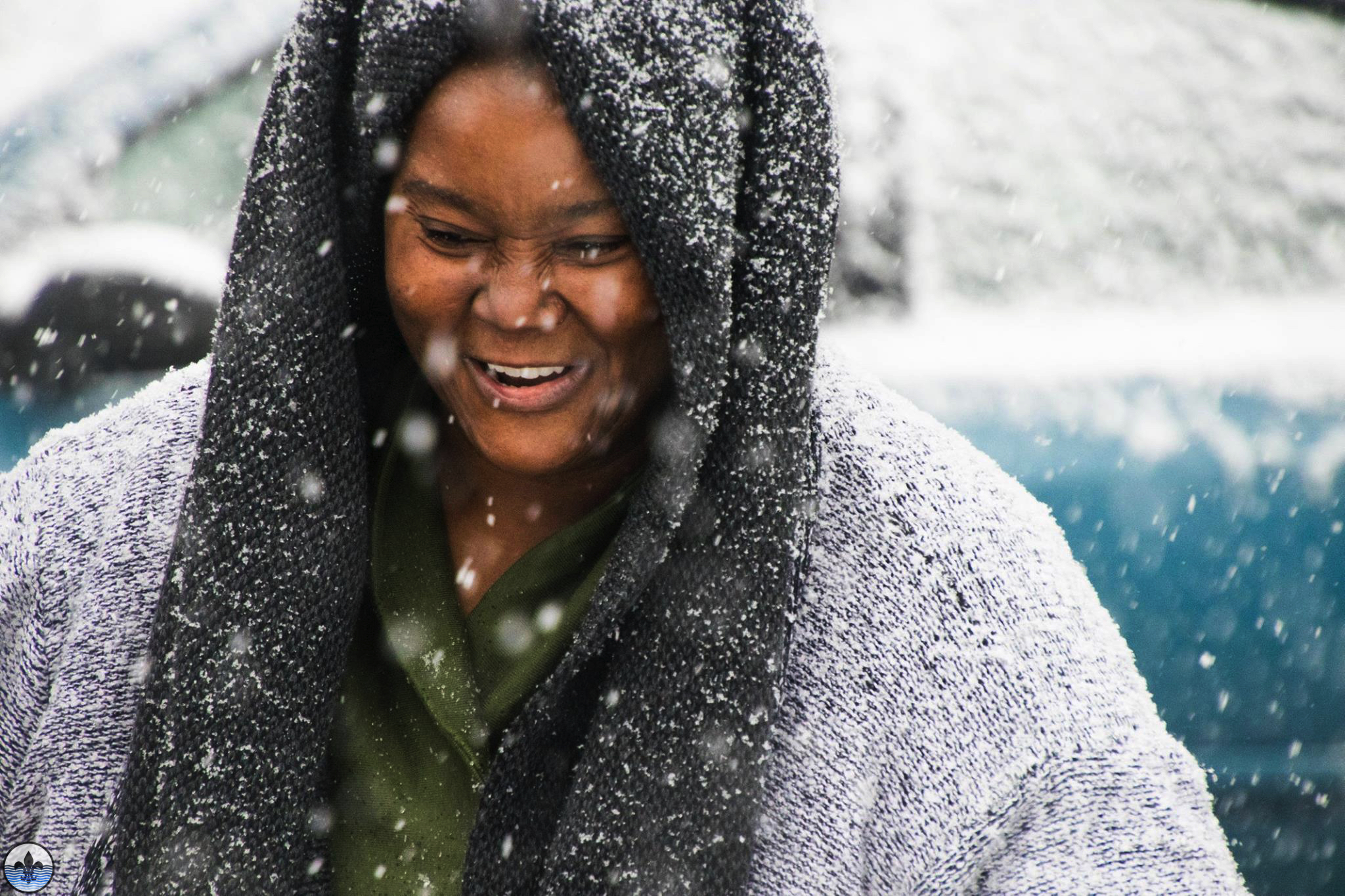 Compared to the Northside neighborhoods that we’ve been covering recently (Baden, Hyde Park, Carr Square), urban settlement came much later to Penrose, though those first residents were still German. It is important to note this characteristic because the built environment of these neighborhoods all harkens back largely to a time when Germans were the largest cultural group living there.

Like much of the land that would become future neighborhoods in St. Louis, Penrose was originally part of a large land tract that was eventually speculated and divided up by some of St. Louis’ most powerful historic figures, including John O’Fallon, Henry Clay, and Clement B. Penrose, to whom the neighborhood owes its name (incidentally, the “B” is for “Biddle”- another significant early family). In 1805, Mr. Penrose was appointed as Land Register over the newly acquired Louisiana Territory, under the Presidency of Thomas Jefferson. In the letter suggesting his appointment, his knowledge of both French and German languages is noted. Locally, he joined Frederick Bates and J.B.C. Lucas as commissioners over land titles. Mr. Penrose, and many of the prominent figures already mentioned, constructed sprawling “country estates” in the area, that have mostly vanished under later development. 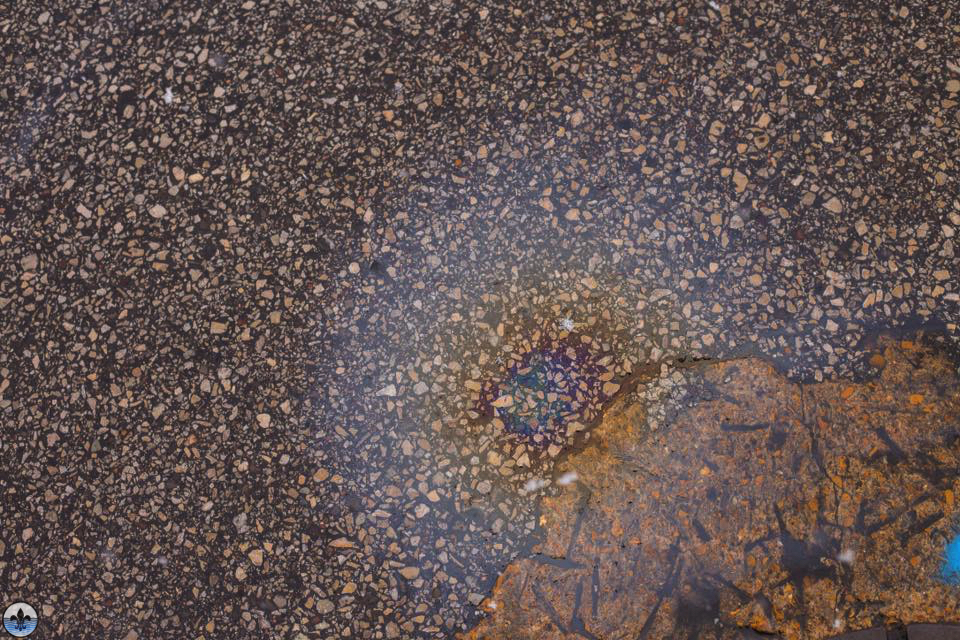 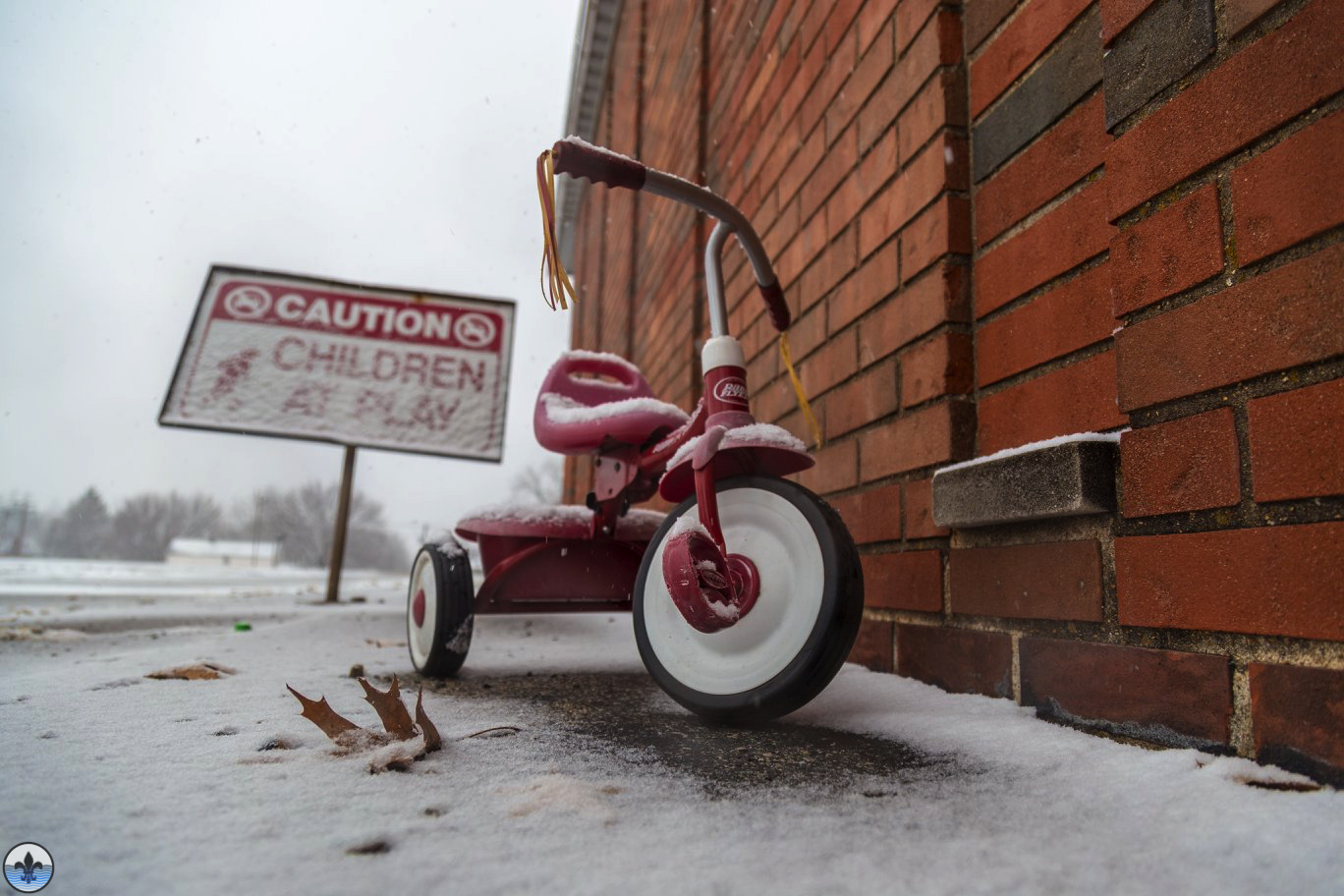 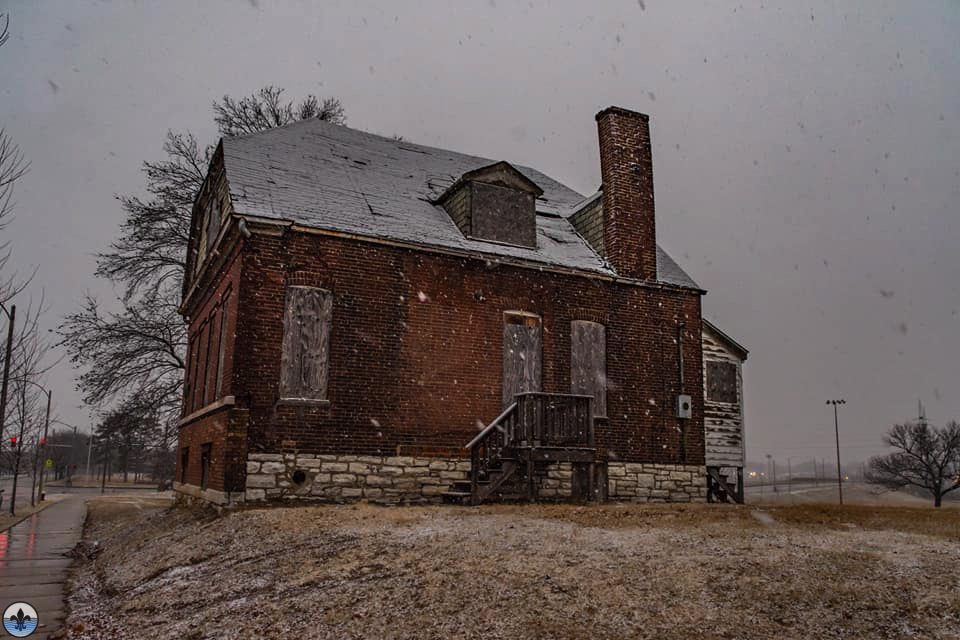 In the 1880’s, Germans began to settle the area, mostly as farmers. Around 1920, the community was large enough to support further development, aided by the extension of transportation infrastructure to Downtown. The community continued to thrive, eventually reaching its peak period in the 1950’s and early 60’s.

In the 1960’s, the citywide use of Racially Restrictive Deed Covenants was finally ended, and African-Americans in particular began to resettle throughout the city from the denser concentrations where they were previously forced to live. In Penrose, most of those new African-American residents came from The Ville neighborhood just to its south. These early Black families were most often very similar to the White families they moved alongside, in terms of income, professional occupations, and values. However, in Penrose, as in many other neighborhoods around St. Louis, the reception from Whites toward their new neighbors was not always warm, and so Whites began to move out en masse. As has been described previously on this site and elsewhere, a rapid exodus of any group of people from a particular area often causes a rapid and sudden decline in home values, lowered local commerce, etc., which in turn can cause a sudden class shift for the community. For Penrose, one of the first neighborhoods in St. Louis to transition from almost exclusively White to almost exclusively Black, the class shift was fairly sudden and extreme. 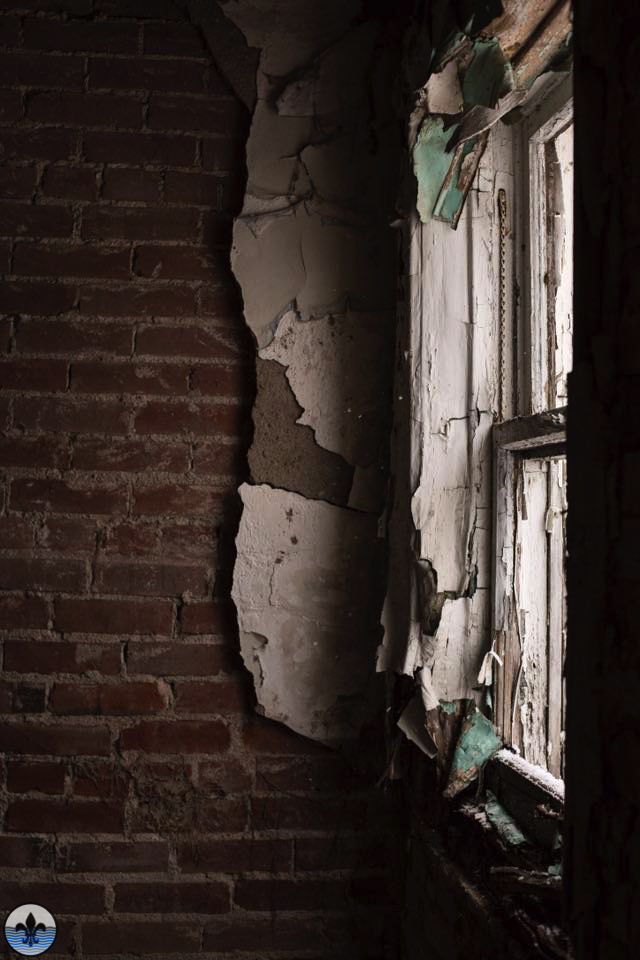 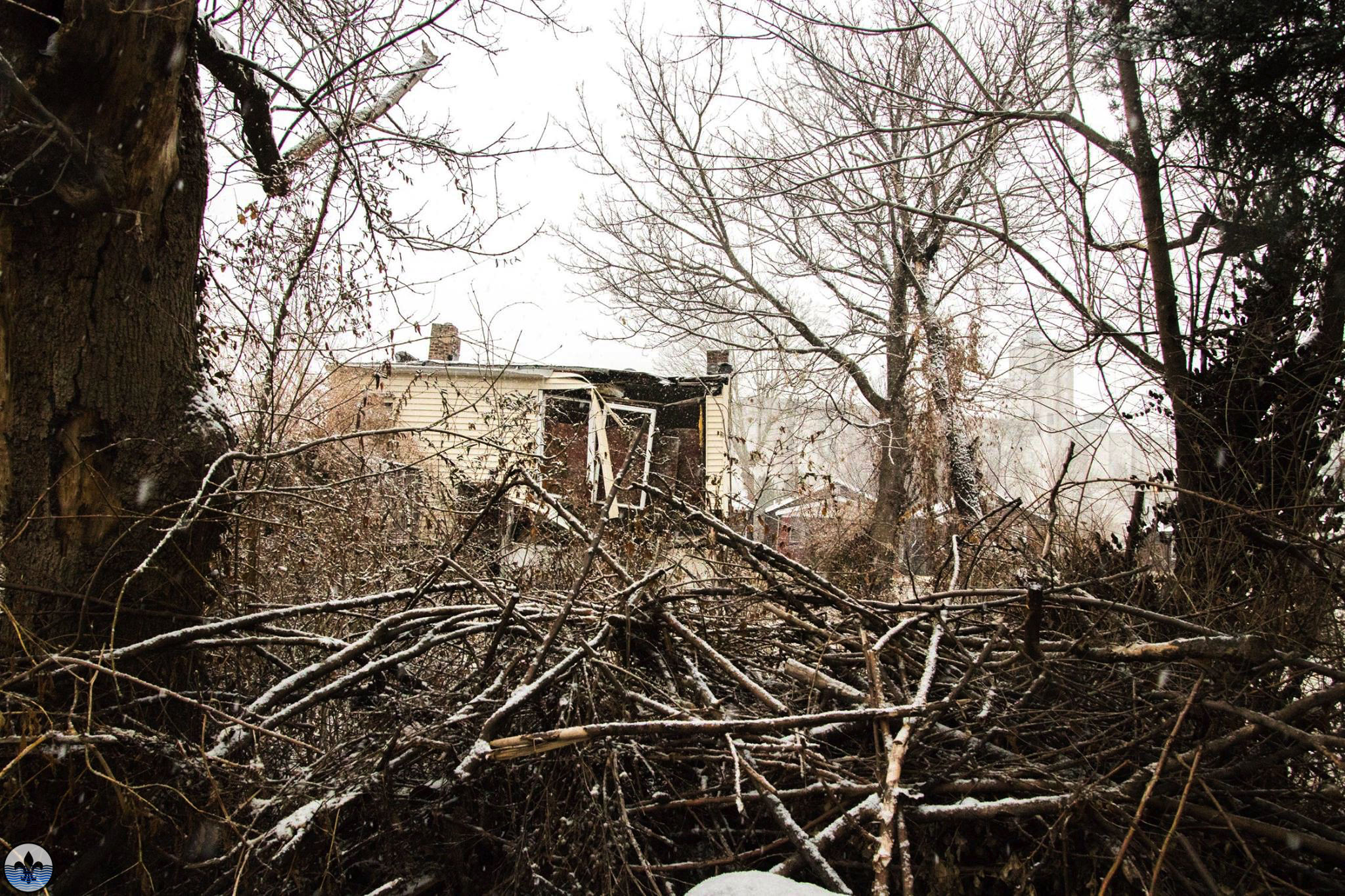 A Photo Flood member who spent his childhood in Penrose, Joe Harrison has not returned to his old neighborhood since his family moved out in the mid-1960’s, and had an emotional reaction to returning home:

“I was raised in a house at 4439 Bessie Avenue during the 50’s and early 60’s. Returning to my old neighborhood for the first time since 1965 was more emotional for me than I had expected. I am so grateful for the opportunity this Photo Flood afforded me. [This is] my old house, from birth to almost 13 years of age. Running down to the basement to throw a chunk or two of coal into the furnace is one of the many memories I have of living here.” 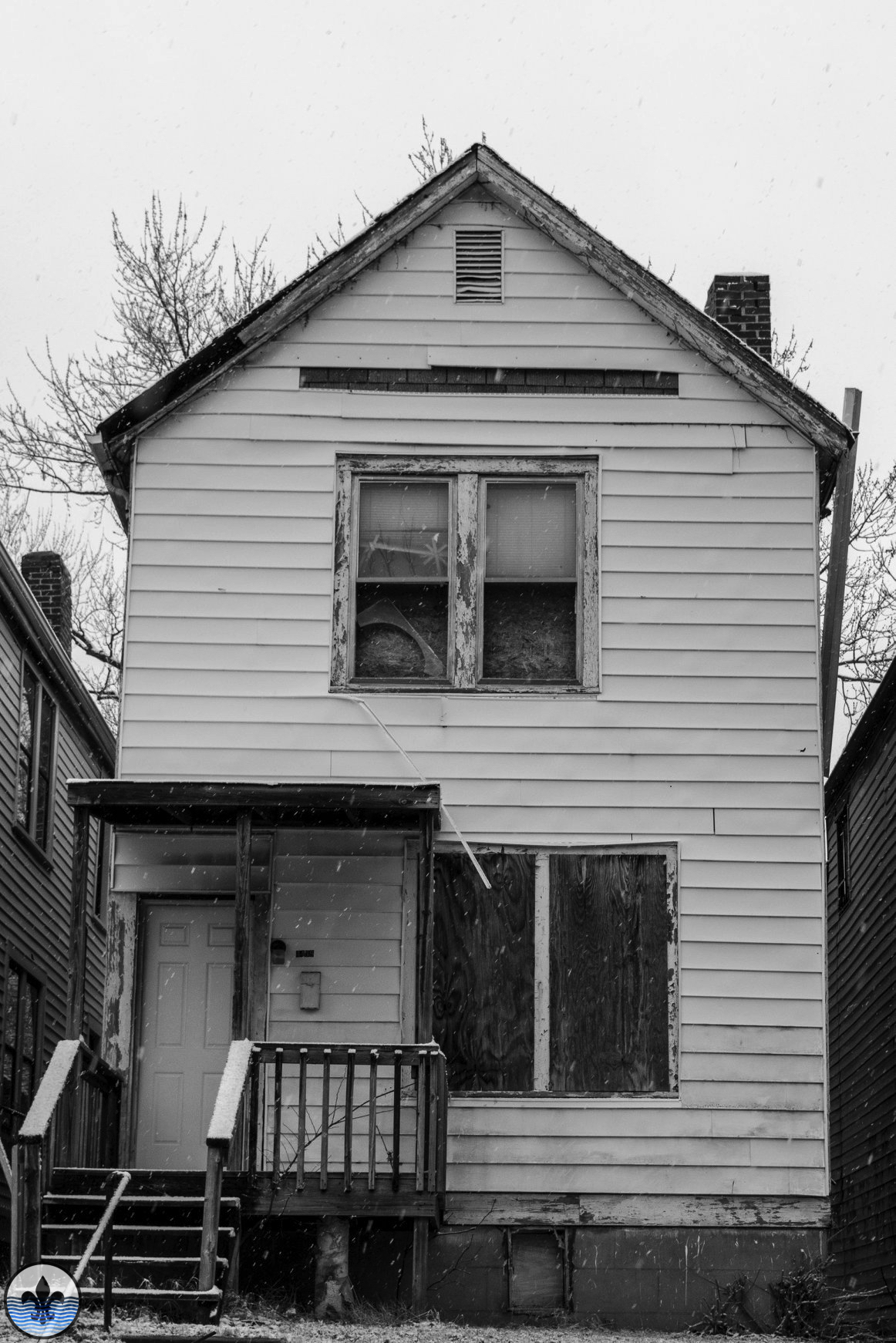 “We rode our sleds down Bessie Ave. when there was enough snow to cover the cobblestones. Well, to be more precise, I believe the proper name for them was ‘pavers’. But everyone that I know of always called them cobblestones.

formerly the home of Joe’s grandparents and uncle, photo by Joe Harrison

“[Above] This is a photo of my grandmother standing in the doorway of 4481 Penrose, circa 1960. I tried to duplicate the shot as best I could and place them side by side. Same mailbox, if I’m not mistaken.”

Joe explained that there was a lot of racial tension in the neighborhood as it transitioned, which resulted sometimes in physical confrontations. He said that his parents decided to move when he asked them for a knife to defend himself at school. He expressed that, back then, he didn’t know how to relate to the new kids living in his neighborhood. He didn’t know their backgrounds, or what life had been like for them or their parents. It is a sort of sad time for him and his family that he doesn’t often talk about. Still, he says that his childhood in Penrose was predominantly happy, and he appreciates the experiences that he’s had. 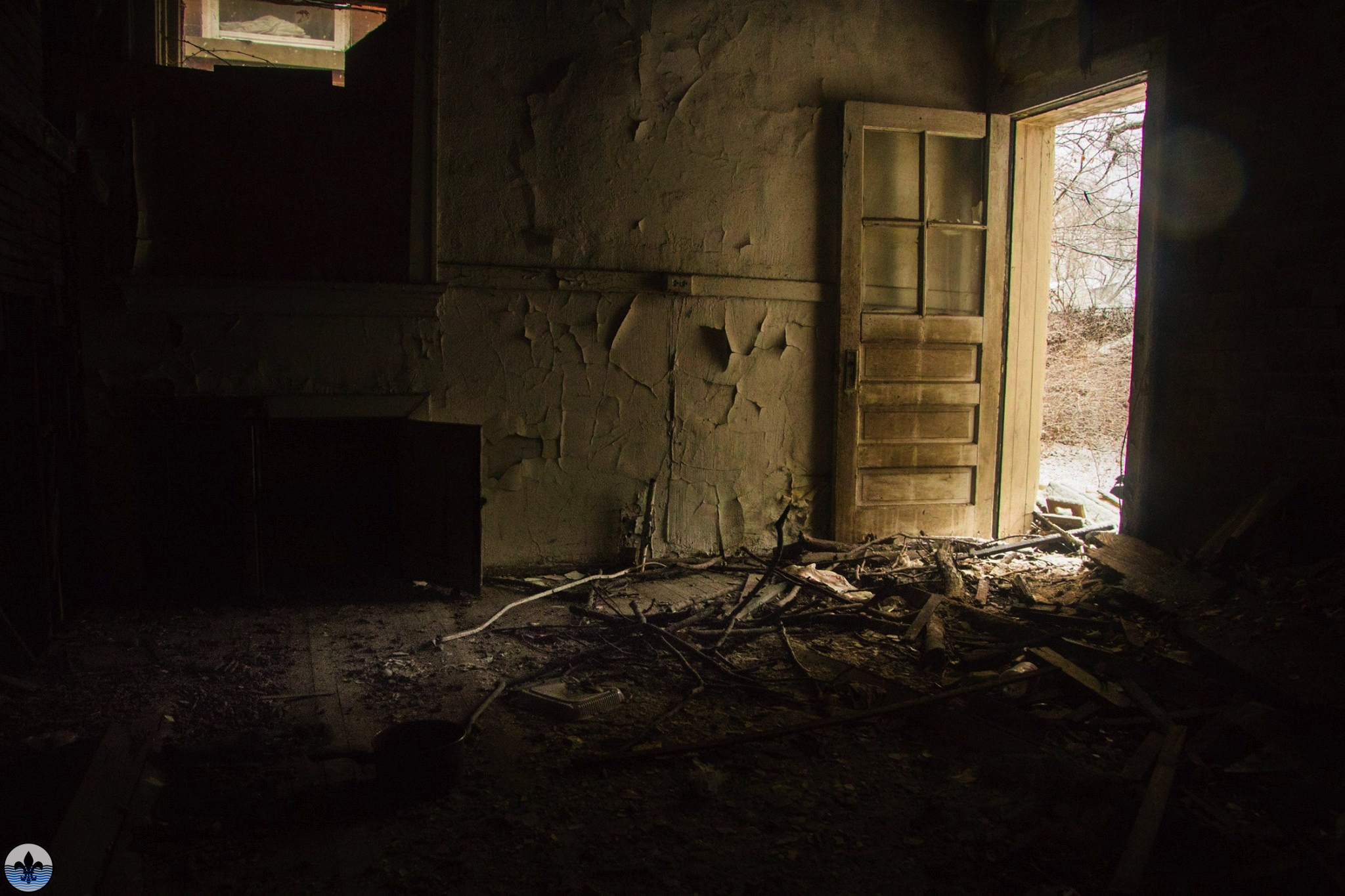 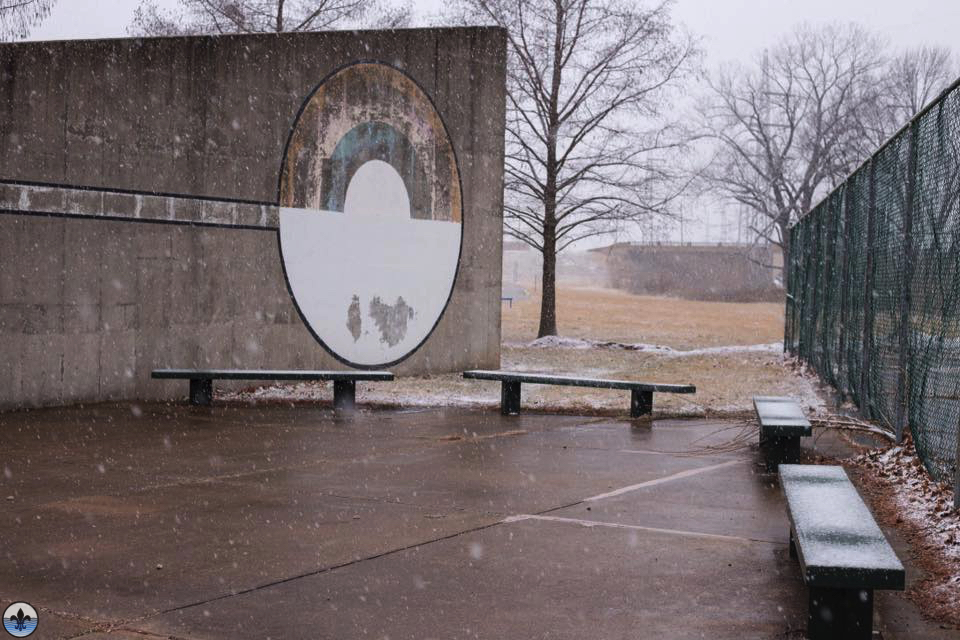 Today, Penrose is 97% Black as of the 2010 census, very similar to most of the neighborhoods around it. As described already, in addition to the transition of racial makeup, there had been a transition of economic status. Despite this, or perhaps somewhat in spite of this, the neighborhood is remarkably stable (yes, there are collapsed or collapsing buildings and crime, but there were also plenty of people about, living their lives and happy to meet the photographers poking around, even with the snow storm), and stands ready to benefit from development should any new investment come. One example of this is the velodrome in Penrose Park, one of less than 30 extant velodromes in the entire country and the only one in Missouri. As recently as 2015, private money has been raised and work has been done to renovate and improve the track for generations of bicyclists to come. As those cyclists zip by in a seeming endless loop, so does Penrose, but what pattern does it bear repeating? 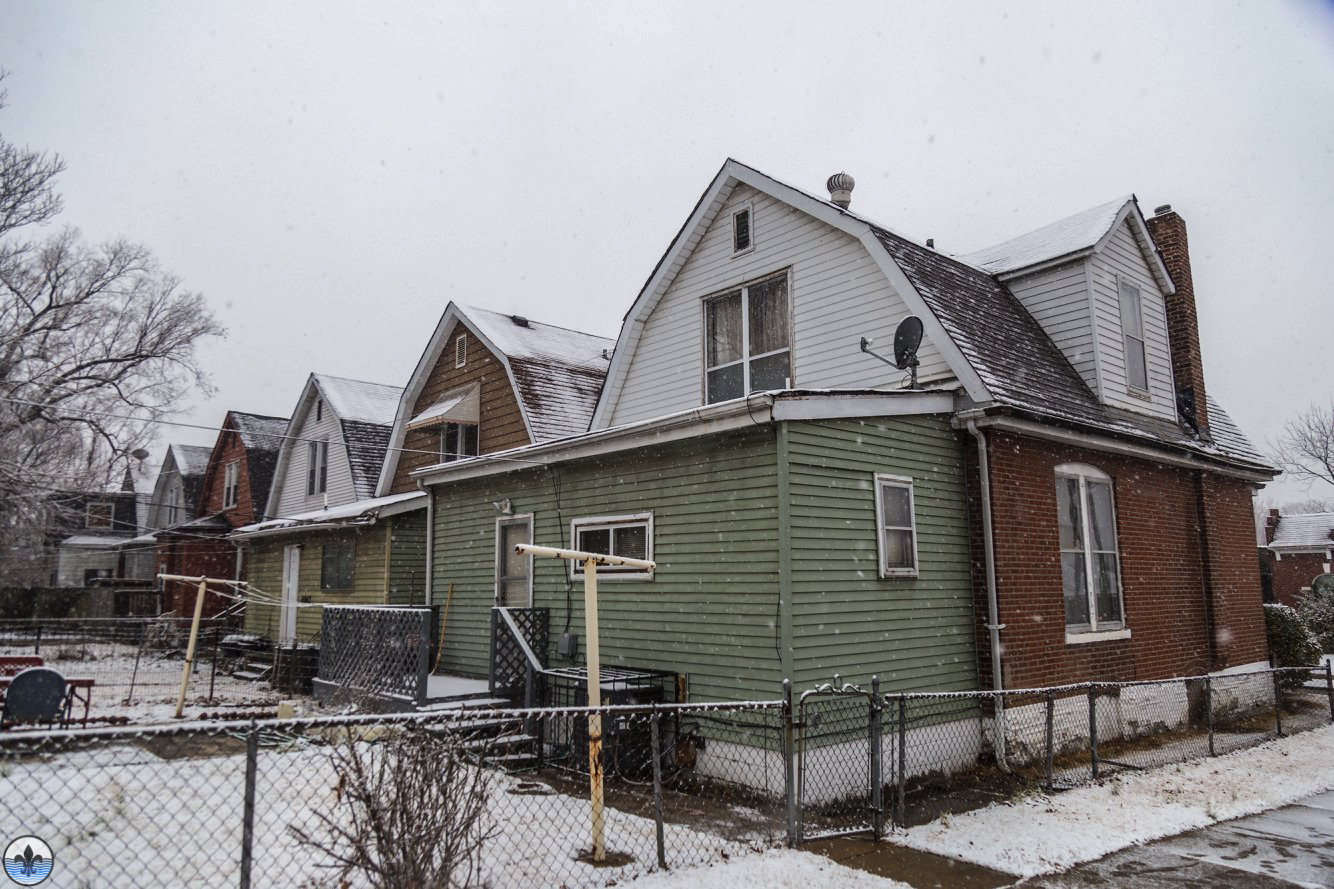 Map is available here (note: we included Penrose Park in our coverage area).