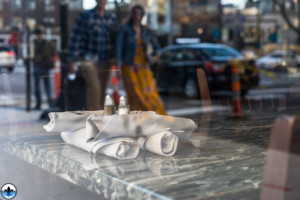 Grand Avenue is a major north-south connecting route for the city, and the stretch we walked is the epicenter.  It is also on an east-west axis.  Washington Avenue, which we explored last month, bisects North Grand at this point.  Actually, this is the south end of North Grand, from Delmar Boulevard to Interstate 64.  This bisects the theatre / entertainment district (aka Grand Center), which was also included in flood 29; and Saint Louis University (SLU), which was also included in Flood 35.  Please see those pages for additional information that I am trying not to duplicate here.

By 1850, St. Louis had risen to become the 8th largest city in the US, and the first west of the Mississippi to make the top ten.  It remained in the top ten through 1960, often reaching fourth place.   The population exploded and peaked at 896,796 in 1950, and then it plummeted.  The 2016 estimate is 311,404 (dropping us down to #61.)  Since I have only lived in St Louis since the 90’s, it is difficult for me to imagine St Louis in its heyday.  But in that heyday, Grand Center was a second downtown, a crossroads of transit lines, and the theatre district flourished.  When the city declined, however, it virtually disappeared.  The 60’s and 70’s were bleak for Grand Center.  The pioneering rehabilitation of the old St Louis Theatre into Powell Symphony Hall in 1968 for the then-homeless St Louis Symphony was ahead of its time.   It was not until the 80’s when Grand Center Inc. was founded (1980), and the Fox Theater and the Sheldon were rehabbed and reopened (1982 and 1986 respectively) that the renaissance achieved critical mass. 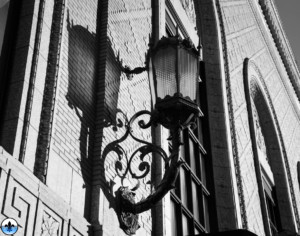 The St. Louis Theatre (above), then the city’s largest movie theatre, opened in 1925.  It was also the largest venue on the Orpheum vaudeville circuit.  On opening day there was a variety show that included, among other acts, the “World Famous Singer’s Midgets”, which was a “spectacle” of 20 little people. 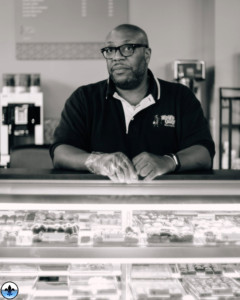 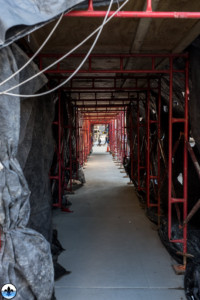 Built in 1884 as the First Congregational Church, the recently-opened 600-seat Grandel Theater (above) is also the new home of The Dark Room. 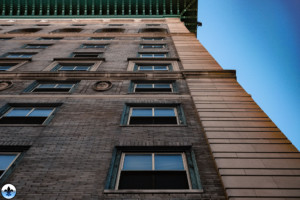 The University Club building (above) opened in 1918.  The Club moved west in 1975, and this is now an apartment building and home to a PFSTL member. 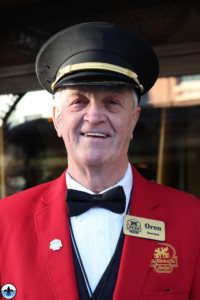 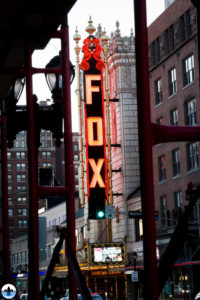 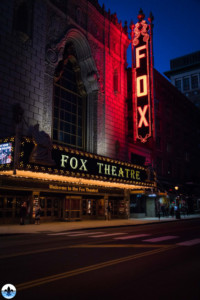 The Fox Theatre (above) was built by William Fox of the Fox Film Corporation (later 20th Century Fox) in 1929, just in time for the Great Depression.  At the time of its opening, it was the second-largest in the nation.  There were many theaters in the Fox chain nation-wide, but this is one of a group of five that are remarkably spectacular.  The others are in Brooklyn, Atlanta, San Francisco, and its twin in Detroit.  After a short period of closure, the Fabulous Fox was rehabbed and reopened in 1982.  If you can’t catch a performance, at least take the public tour! 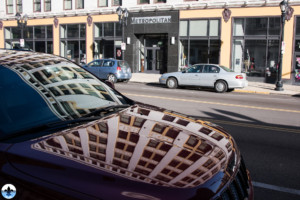 The Metropolitan (above) is a turn-of-the-century office building that was vacant for years.  Not long ago it was rehabbed into apartments marketed towards artistic residents.  It is also home to another PFSTL member. 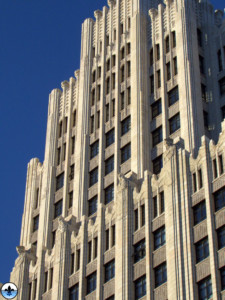 The Continental Building (above) is on Olive just off Grand, and its 22 stories dominate the skyline.  It was designed by prominent St Louis architect William Ittner who is also famous for building innovative and beautiful public schools in St. Louis and 25 other states.  He also designed the Missouri Athletic Club which we saw on our Washington Avenue walk last month.  Built in 1928 and troubled from the outset, there is so much history and drama in this building that an entire book was written about it: “The Queen of Lace: The Story of the Continental Life Building.”  (Find it on Amazon!)  The last tenant left in 1973, and then it suffered badly from neglect and vandalism during a long period of vacancy. Eventually, it was rehabbed for apartments and reopened on October 19th, 2002.

The Woolworth Building (above), interestingly enough, was designed to be the base of a tower, the construction of which never materialized. 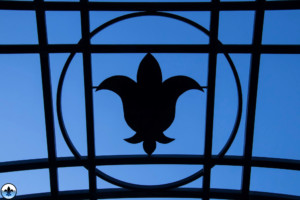 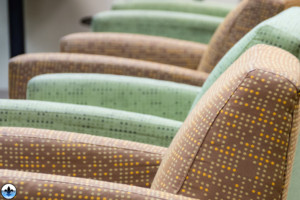 As opposed to Grand Center, SLU has been an anchor and stabilizing influence, but not without some controversy.   It has purchased and demolished a number of nearby buildings to create green spaces and parking lots.

When it opened in 1888, DuBourg Hall (above) contained all of SLU, which was founded in 1818 and originally located downtown. 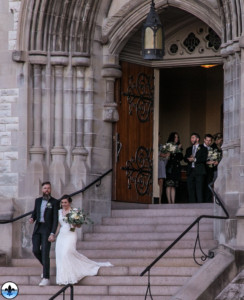 St. Francis Xavier Church (1898) (above) is part of SLU and was designed at the same time and by the same architect as DuBourg Hall, but it took longer to complete.  The picture below was shot from the top step of the front entrance.  Looking northward, it captures the heart of Grand Center.  St. Alphonsus Liguori Rock Catholic Church is visible in the background. 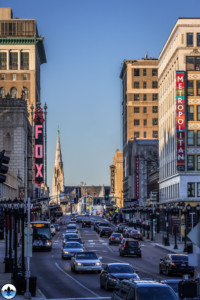 And for more information about Grand Center please see this flood page: