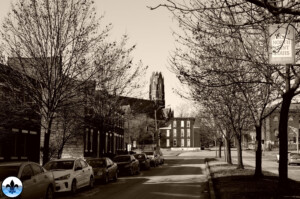 Old North Saint Louis (ONSL) is a historic, resilient neighborhood.  Geographically, it is shaped roughly like a rectangle (actually, like a parallelogram).

The border of the short end at the top is Palm, which separates ONSL from the architectural crown jewel Hyde Park.  Palm, incidentally, soon becomes the storied Natural Bridge just west of ONSL.

The border of the short end at the bottom is Cass, which separates ONSL from Columbus Square, which is just north of Downtown.  That’s how close ONSL is to the original city of St Louis, and yet, they were both separate, competing municipalities until ONSL was annexed in 1841.  An entire book was written about the proud history of ONSL. 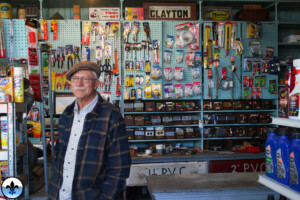 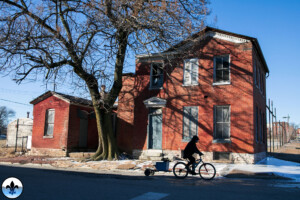 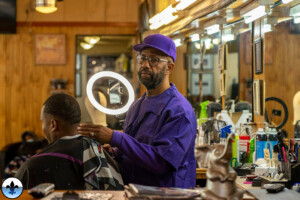 The long western border is N Florissant Ave, which separates ONSL from the venerable St Louis Place, a large part of which is being repurposed for the National Geospatial Agency’s (NGA) new Western headquarters, to be completed in 2024.  We are eager to see if and how this eventually impacts not only St Louis Place but also the surrounding neighborhoods including ONSL.  Former Congressman William Lacy Clay Jr. calls the sprawling 97-acre site “an oasis growing out of the desert… Hopefully, that sets an example to invest in an area that had previously never been invested in my lifetime.”  Hope alone will likely be insufficient, however, and we are not aware of specific, tangible initiatives to leverage this project to improve the surrounding area, as we saw on our visits to The Grove and Kingshighway just a few years ago:

Washington University Medical Center created the Washington University Medical Center Redevelopment Corporation (WUMCRC) in 1974 to upgrade and stabilize 38 square blocks surrounding the medical center.  WUMCRC buys dilapidated or underused properties and sells them to developers, helps to relocate displaced residents, and works with the city to improve the streets and lighting.  According to their web site, they are “a partnership between BJC Health Care and Washington University School of Medicine and works to improve the quality of life for the neighborhoods surrounding the medical campus. In order to achieve this goal in Forest Park Southeast and the Central West End , WUMCRC has invested millions of dollars toward regenerating the market for private investment in businesses and real estate, enhancing human and social service opportunities, and improving the level of physical and personal security.”  This was a factor in the renaissance of The Grove in Forest Park Southeast.  Following their lead, St. Louis University in 2017 created the Midtown Redevelopment Corporation to improve the 400 acres surrounding their new $550 million hospital construction project.

Incidentally, on 02/25/2022, The Board of Aldermen advanced an $87 million capital improvements package, mostly funded by federal pandemic aid, which does not include significant investments in this area. 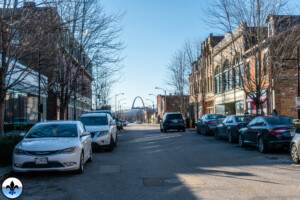 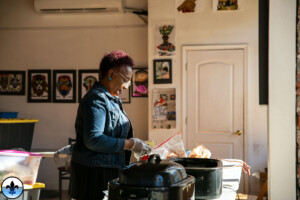 The long eastern border is Interstate 70, aka the Mark Twain Expressway, which separates ONSL from Near North Riverfront, the long swath of space between I-70 and the river that became sparsely inhabited commercial/industrial space after it was cut off from the rest of the city by the interstate.  In fact, the part of the Riverfront that is between ONSL and the river, actually was originally part of ONSL, before it was severed by I-70.  This brings us to one of our recurring themes:  The damaging impact of interstate construction on city neighborhoods.  We have previously mentioned this in several articles, most notably Pestalozzi Street and Route 66.

I-70 demolished many homes in ONSL, and it also caused the dwindling residential portion of ONSL to the east to be cut off, so the 14th street commercial business suffered a loss of customers.  To make matters worse, a well-meaning attempt to revive the district by turning it into a pedestrian mall backfired by making it harder for customers to get there, and furthermore, the neighborhood also suffered from the restrictive practice of redlining (more on that in a minute.) 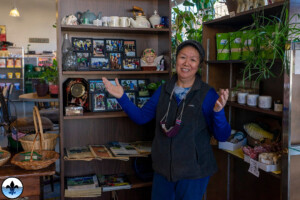 Freeway construction adversely impacted all major cities, not just St Louis, if that is of any consolation.  The long-overdue national project began at a ferocious pace to satisfy the pent-up demand, with little regard for what was in the way.  Civil engineers were trained to complete the projects as quickly and cheaply and safely as possible.  This was mostly fine in rural areas where farm or pasture or unused land was being consumed, but in urban areas, neighborhoods were being consumed, damaging the fabric of the city.  Nobody thought much about this at first.  Progress was welcomed.  The consequences came later.  We now have laws to govern this process, although one may wonder if the pendulum has swung a bit in the opposite direction, given that it took 30 years just to complete the Page Extension.

The irony is that Eisenhower himself did not want urban freeways, he was actually one of the few people concerned about potential collateral damage, thus they were not in his original plan.  However, that plan was voted down by Congress in 1954, for various reasons, so it had to be revised to pass successfully in 1956.  One of the major revisions was to add urban interstates to win the votes of urban congressmen who wanted them in their districts. 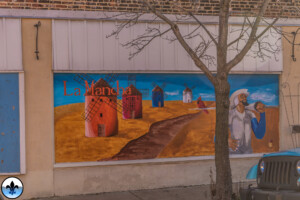 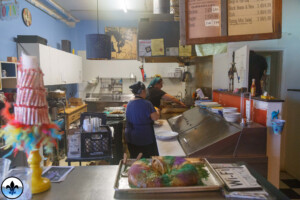 The migration of the middle class, in search of greener pastures (figuratively and literally), from the inner city to the outer suburbs – a nationwide phenomenon – was facilitated by the post-war explosion of the automobile industry.  Car ownership rates skyrocketed, and streetcar usage plummeted. People could live where they wanted without being tied down to mass transit.  But, another factor was the rise of federal mortgage insurance programs which reduced down-payment requirements, thus putting homeownership within reach of many apartment-dwelling renters.  So, homeownership rates were also skyrocketing.  New suburbs were required for new homes.  Ironically, the interstates were originally seen as a way the help the cities by making it easier for people to return to the city for jobs, shopping, events, etc.

This brings us back to the topic of “redlining.”  Unfortunately, ONSL was one of the neighborhoods redlined (deemed undesirable) which meant that families moving in (who were mostly Black) were denied financing for homeownership and improvements.  The link below describes how this still impacts investment in the neighborhood. 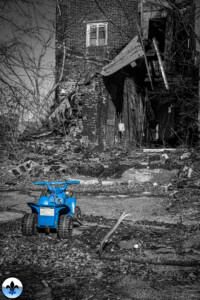 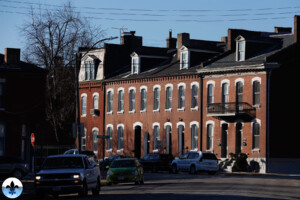 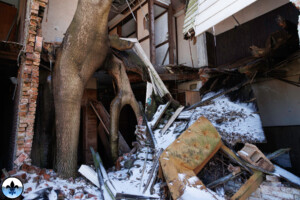 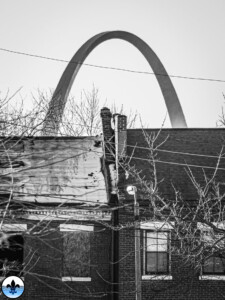 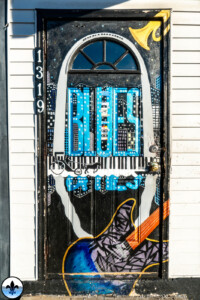 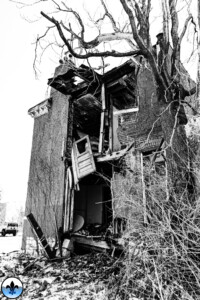 There are many points of interest in ONSL, here are just a few:

The iconic, historic, and beloved Crown Candy is pictured above.

Marx Hardware (pictured below, and the second picture from the top) is another mainstay of ONSL.  The link below tells the story: 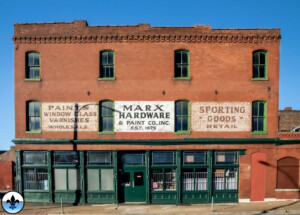 On the south end of Old North lies the Trestle with its hopeful but uncertain future.  This was the subject of a mini-flood:  http://www.photofloodstl.org/mini-flood-26-the-trestle

For more information about the trestle:

A relatively new addition to the neighborhood is the hard-to-miss container house (pictured below):

To learn more about ONSL and see what caught the eye of our photographers on our first visit to ONSL, during the first year of PFSTL, about eight years ago, here is our original article:  http://www.photofloodstl.org/photo-flood-6-old-north-saint-louis/