In 1812, a market containing 12 stalls opened on Rue de la Place, so the Americans starting calling it “the street where the market is”, and thus it eventually became Market Street.

This virtual tour starts at historic Union Station (pictured above) on the south side of Market Street between 20th and 18th streets, and we will “walk” east towards the river.  This 1.4 mile stretch of Market is packed with points of interest (there is little to report on west of Union Station). 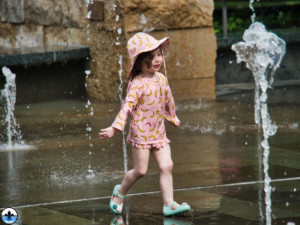 “From the day it opened in 1894 until the Gateway Arch was completed in 1965, the St. Louis Union Station was the city’s signature landmark.  It was both an aesthetic and commercial triumph.  Frank Lloyd Wright called it and the Wainwright Building St. Louis’s finest structures.  It was the nation’s largest train station.”  (James Neal Primm in “The Lion of the Valley”)

Union Station was built in 1894 for $6.5 million, reached its peak traffic in 1943, was abandoned by Amtrak in 1978, and sold in 1985 for $5 million to developers who rehabbed and reopened it as a shopping mall and hotel.  It was the largest historic rehabilitation tax credit project in the country at the time.  It was a great success… for a while.  The mall died out and is undergoing another renovation to add an aquarium.

News flash:  On 06/18/2018, the 20-year-old Hard Rock Café announced that it would close in August.  Landry’s Seafood House, the other restaurant at Union Station, has no plans to close.

Directly across the street from Union Station is Aloe Plaza, the centerpiece of which is “The Meeting of the Waters” fountain by Carl Milles, 1939.  It was originally named “The Wedding Of The Rivers” which was deemed offensive.  Ironically, we found it to be dry, presumably drained for maintenance.

Aloe Plaza was created and Market street was widened for $2.6 million, a relatively small part of a massive bond issue overwhelmingly approved by voters in 1923.  Because Union Station was the transportation hub of the city, which at one time was the fourth largest city in the nation, and because Market street led directly from there to the river through the center of the city, civic leaders wanted the street to be lined with civic buildings and monuments and parks.

As we cross 18th street, the green space of Aloe Plaza on the left side continues as Memorial Plaza.  Across the street is the Post Office (1937), followed by the Federal Office Building (1962) which is now the home of the St. Louis City Municipal Court, and the Kiel Opera House (1932) which is now called the Peabody Opera House (pictured below). 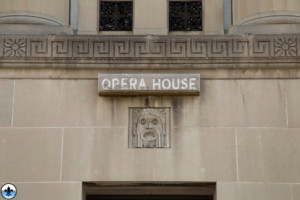 The opera house was also used by the St. Louis Symphony Orchestra until it moved to its permanent home Powell Hall in 1968 (as discussed in the North Grand Mini-Flood, http://www.photofloodstl.org/mini-flood-59-north-grand).  Closed in 1991, the adjoining auditorium was demolished to build Kiel Center in 1994 (which became the Savvis Center in 2000 and then Scottrade Center in 2006 and now Enterprise Center in 2018).  In 1996, after spending $2.5 million on renovations, the partners called it done and bailed.  It remained vacant until renovations were completed at a cost of $79 million in 2011.  Which leads to an interesting sidebar:  “From 1993 to 2008, Fred Corsi and his colleague, Dennis Petrullo, were charged with keeping the shuttered opera house as intact as possible. With a budget of about $60,000, the two men kept water and electricity running to the building, paid for 24-hour security patrols, and made emergency roof repairs.”  (St Louis Public Radio)  We have been in many abandoned buildings and have seen how quickly they are destroyed by vandals, thieves and the elements.  What this building have looked like without the heroic efforts of those two men?  Could it have even been saved otherwise? 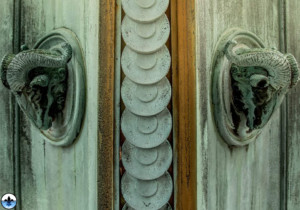 Crossing 14th on the right is the Municipal Courts & Jail (1911) which is currently vacant, now surrounded by temporary construction fencing, so perhaps renovation work is about to begin.

Next up is the St. Louis City Hall (pictured above) which was officially completed in 1896 but in fact, due to persistent political interference it was not entirely completed until 1904.  The original design included several towers which were inexplicably removed in 1936.  It is modeled after the Hotel de Ville, which is the city hall in Paris. 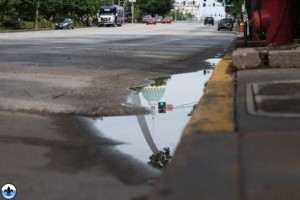 As we approach the river, the ubiquitous arch looms larger, juxtaposing itself into our photographic visions with increasing frequency and intensity. 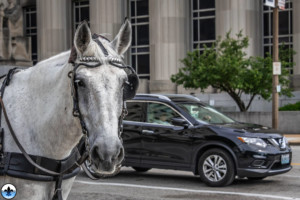 After we cross Tucker, the Civil Courts Building of 1930 dramatically breaks up the green space on the left and is now home to the 22nd Judicial Circuit Court.  Across the street is the 1935 US Court & Custom House (pictured above and below), now the Carnahan Courthouse St. Louis City Circuit Court. 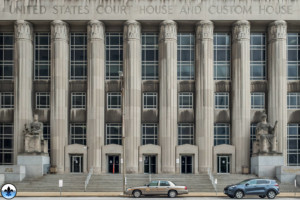 Crossing 11th, the green space of the mall resumes with the Serra Sculpture Park.  Across the street on the right is the 20-story 1010 Market Street Building (1981), home of KSDK.   Next up and also vintage 1981 is the Centerre Bank building, now Bank Of America.  The delightful Citygarden is across the street. 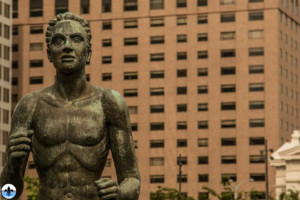 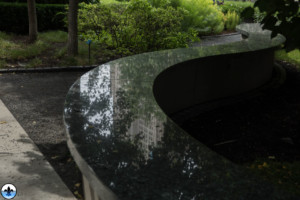 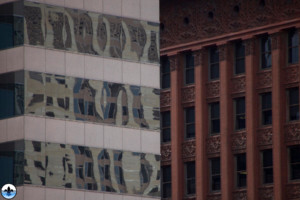 Crossing 8th we encounter Peabody Plaza on the left and the 1977 General American Life building, now home to Spire. 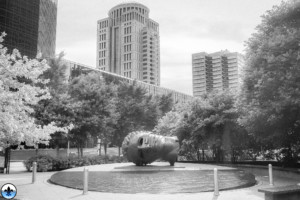 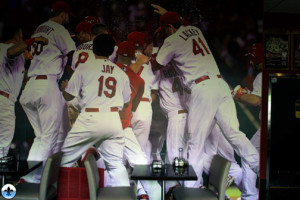 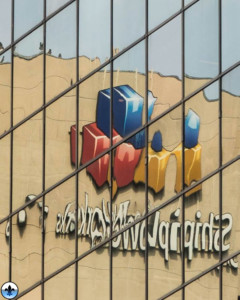 Between 7th and Broadway is Kiener Plaza Park (pictured below) on the left and the ballpark Hilton on the right. 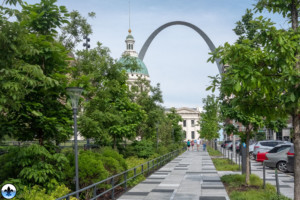 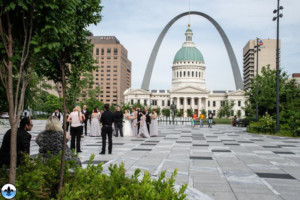 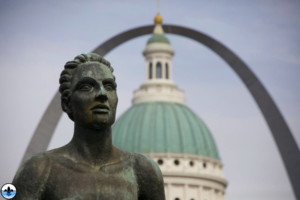 Between Broadway and 4th on the left is the iconic Old Courthouse (pictured below on the left) which was built in several stages beginning in 1839 thru 1864.  The dome was a pioneering design in its time (1859), preceding the US Capitol dome (1865).  The famous Dred Scott case began here in 1846.  Replaced by the Civil Courts Building in 1930, it was nearly demolished as a part of the massive and excessive land clearing that was to become the Arch grounds.   Instead, it was turned over to the National park Service in 1940 but did not reopen until 1957 as a museum and National Historic Monument.  Across the street is the former Equitable Building (1971), now home to Tony’s. 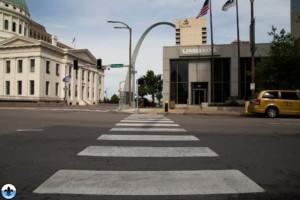 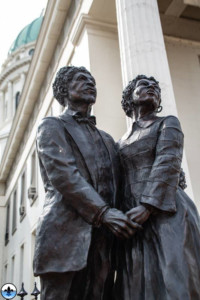 Now we are on the final block of Market.  On the right is the Luther Ely Smith Park which spans I-44 to provide pedestrian access to the Arch grounds.  On the right is the former International Fur Exchange Building which was built in 1920.   Demolition, to make way for yet another surface parking lot, had actually begun when Charles and Shirley Drury stepped in at the nick of time and spared the building, investing $26.5 million.  It is now a Drury hotel adorned with an “Abraham Lincoln slept here” plaque. 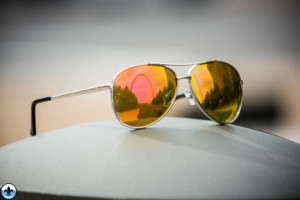