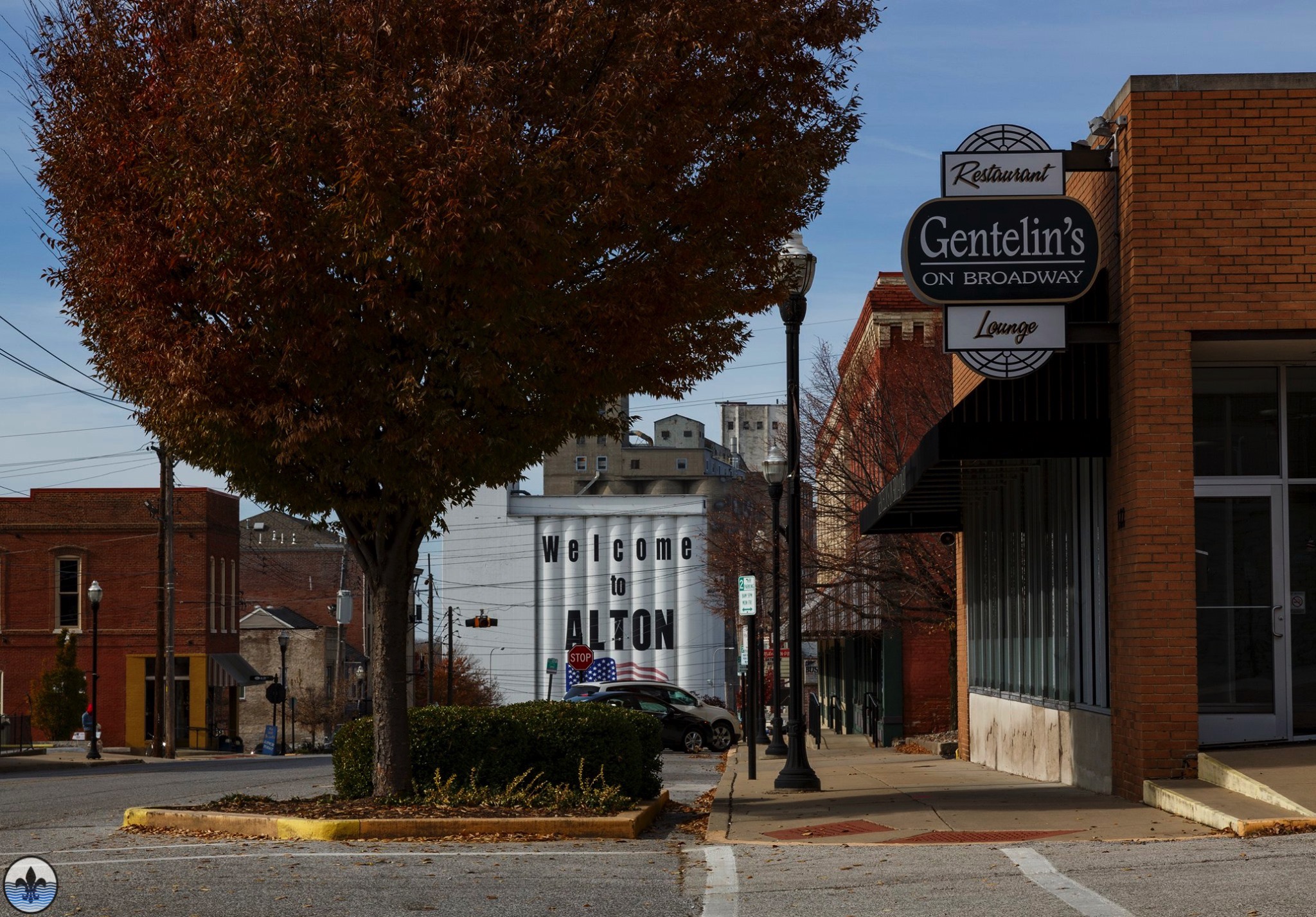 Alton is a city in Illinois, that is situated in an area where the Illinois, Missouri and Mississippi Rivers all converge. A river town through and through, Alton blends a mixture of history, mystery, beauty and determination in a way that few communities anywhere can match. It is also a city on a revitalization roll, having won Small Business Revolution – Main Street, a reality TV show grant to renew six downtown businesses in 2018, and in 2019, becoming the focus of a $75 million renovation and urban development project, called AltonWorks. If you’ve never been to Alton, don’t be surprised if it winds up in your travel plans in a big way, in the very near future. 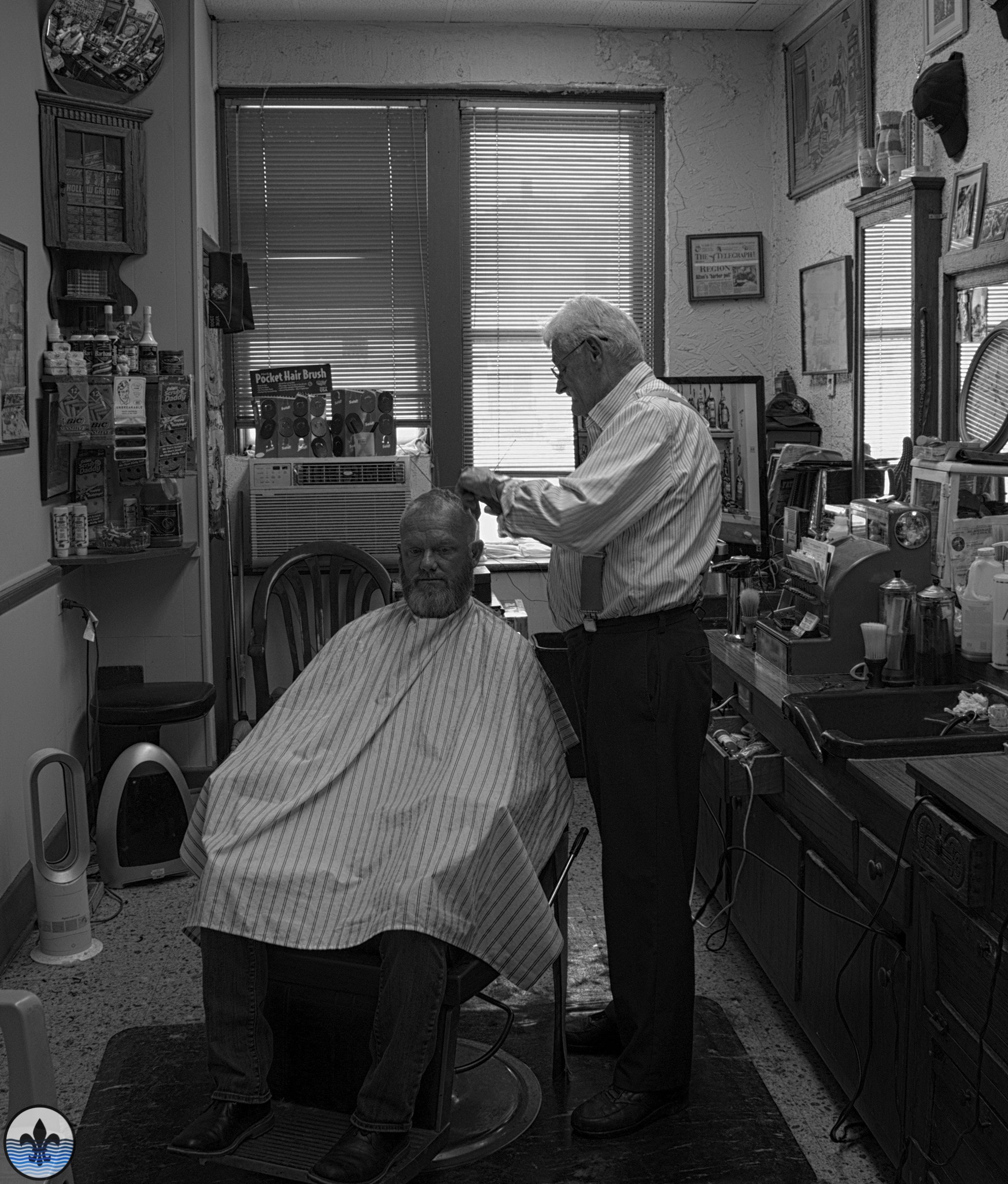 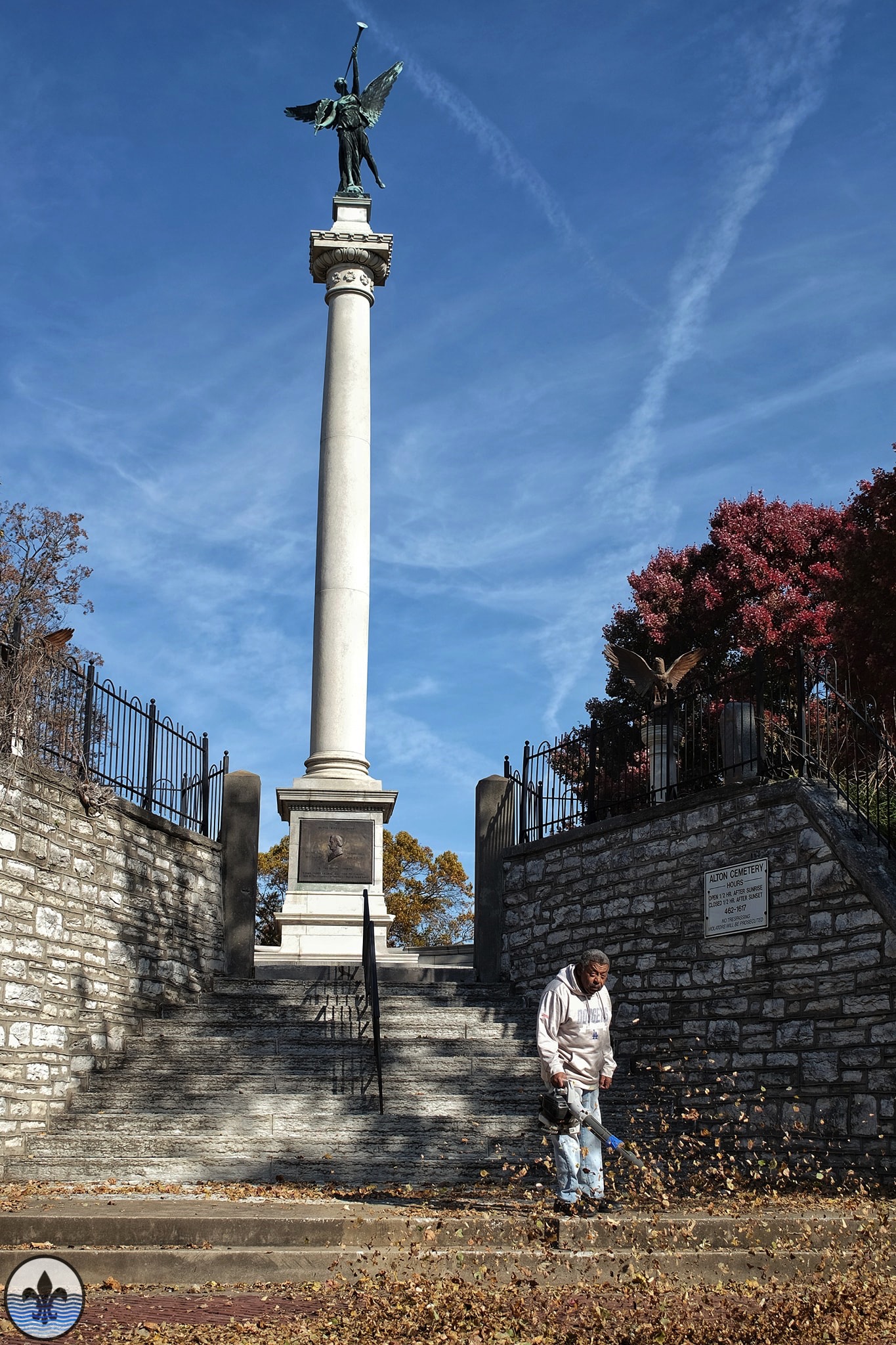 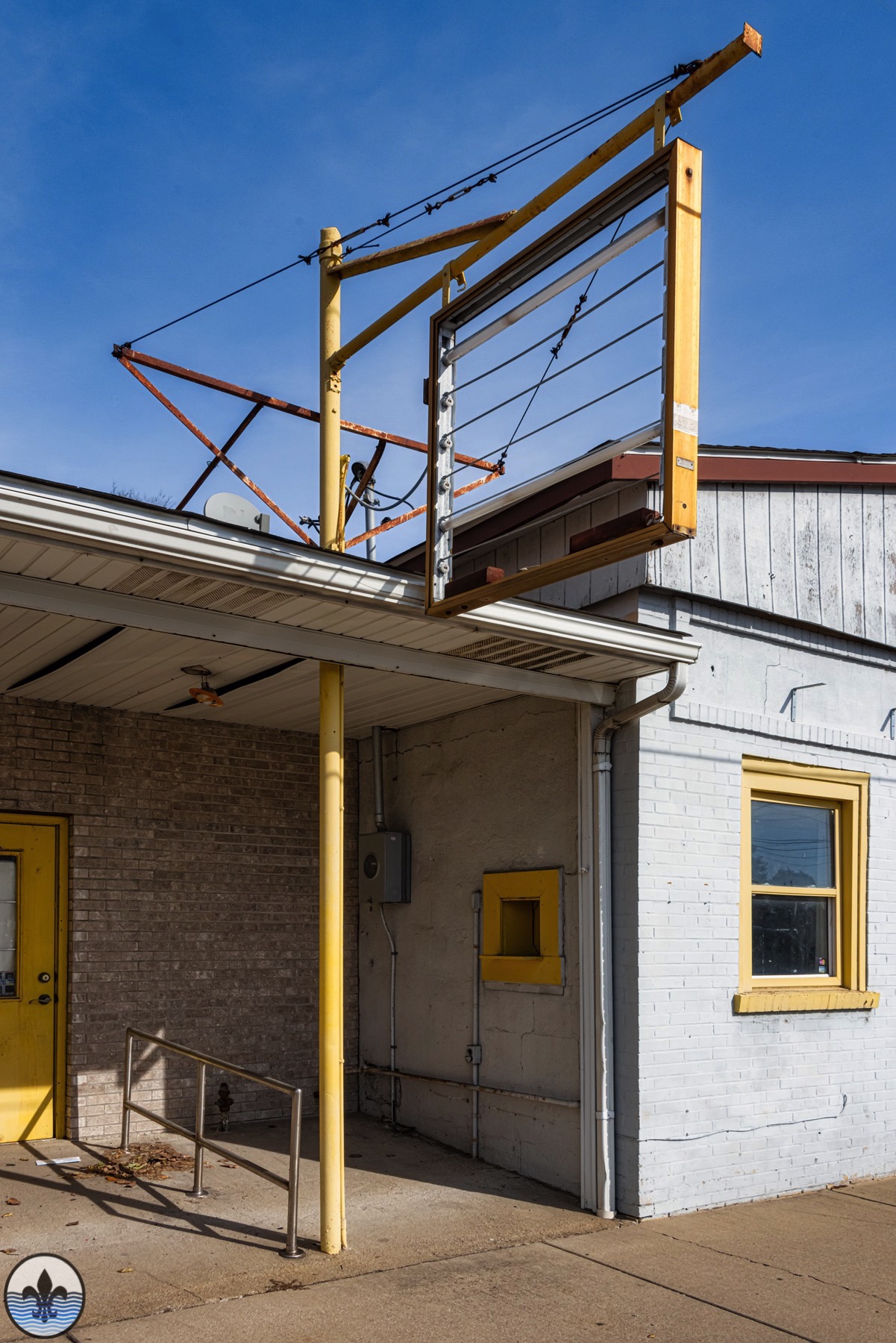 The area around Alton was settled and in use by Native Americans for hundreds (perhaps thousands) of years before Westerners arrived. From this era, one of the city’s most bizarre and iconic legends emerged, that of the Piasa Bird. The first Europeans to explore and document large portions of the Mississippi River were Louis Jolliet and Jacques Marquette (known also as Père Marquette). In 1674, on their return expedition to the Great Lakes, the explorers rerouted to the Illinois River, a quicker journey. Somewhere near the mouth of that River, Marquette recorded a description of a beastly figure painted on the rocks. From that written account, the legend of the Piasa Bird, a monstrous creature that swooped down from the bluffs to attack unassuming men, women and children, has become an amalgamation of alleged indigenous storytelling and fictional appropriation, nearly impossible to separate, if for no other reason than due to the story’s beloved entrenchment in both national and local lore.

For this author, as a child visiting Alton, and seeing the image of the Piasa Bird, once painted, then replaced by metal signage, then painted again, high up on the bluffs, nothing else in my experiences of the time stirred my imagination so effectively. Every time we passed by it, my attention was instantly affixed upon the sky, hoping to catch a glimpse of the mythical soaring creature, and for my children, the same intrigue exists. This is one of the city’s inimitable attractions: a sense of mystery that permeates so much of the area; an area that has also been nicknamed one of America’s most haunted places, and is the birthplace of the so-called “Alton Giant”, Robert Wadlow, who stood nearly nine feet tall. 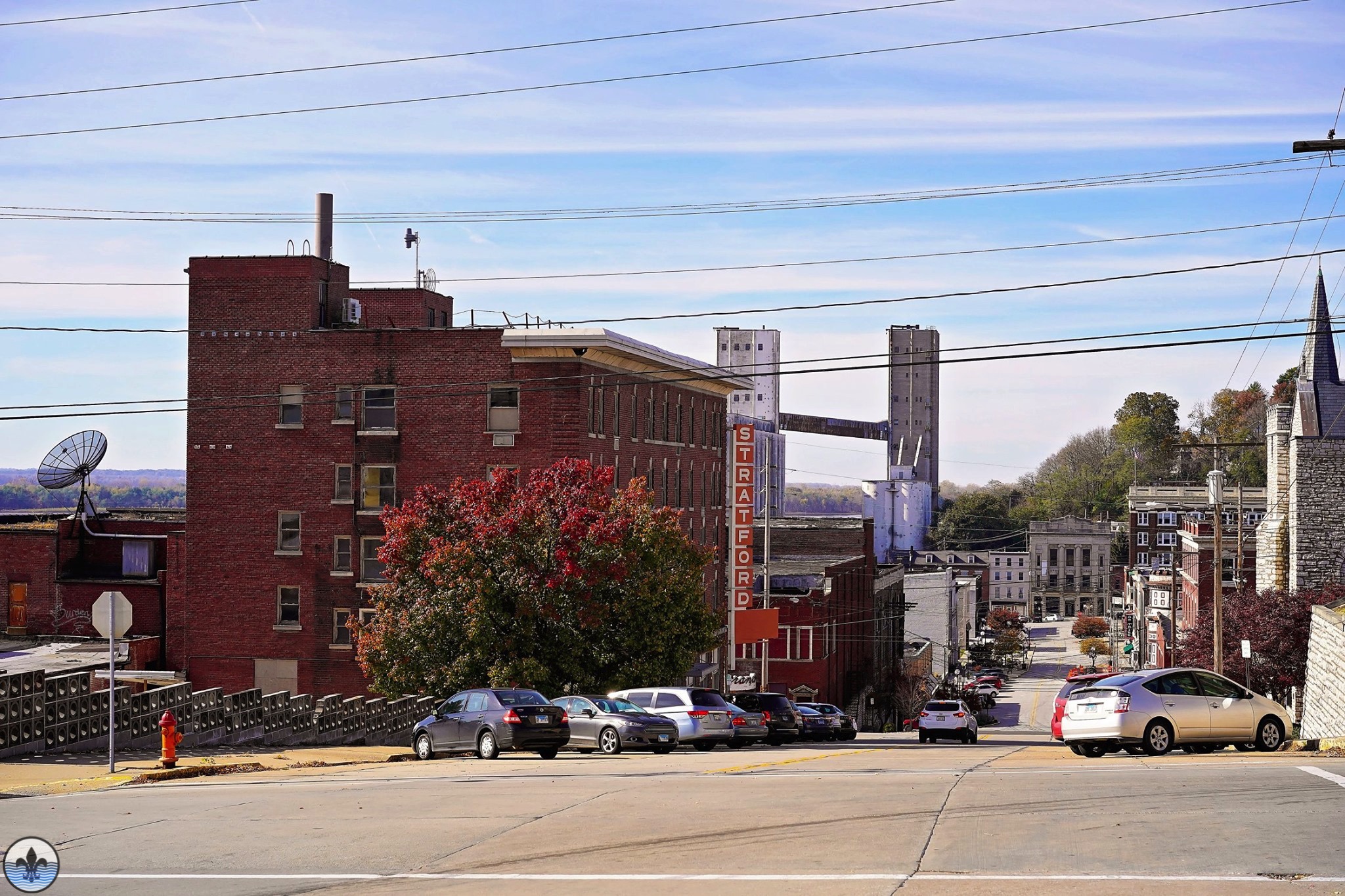 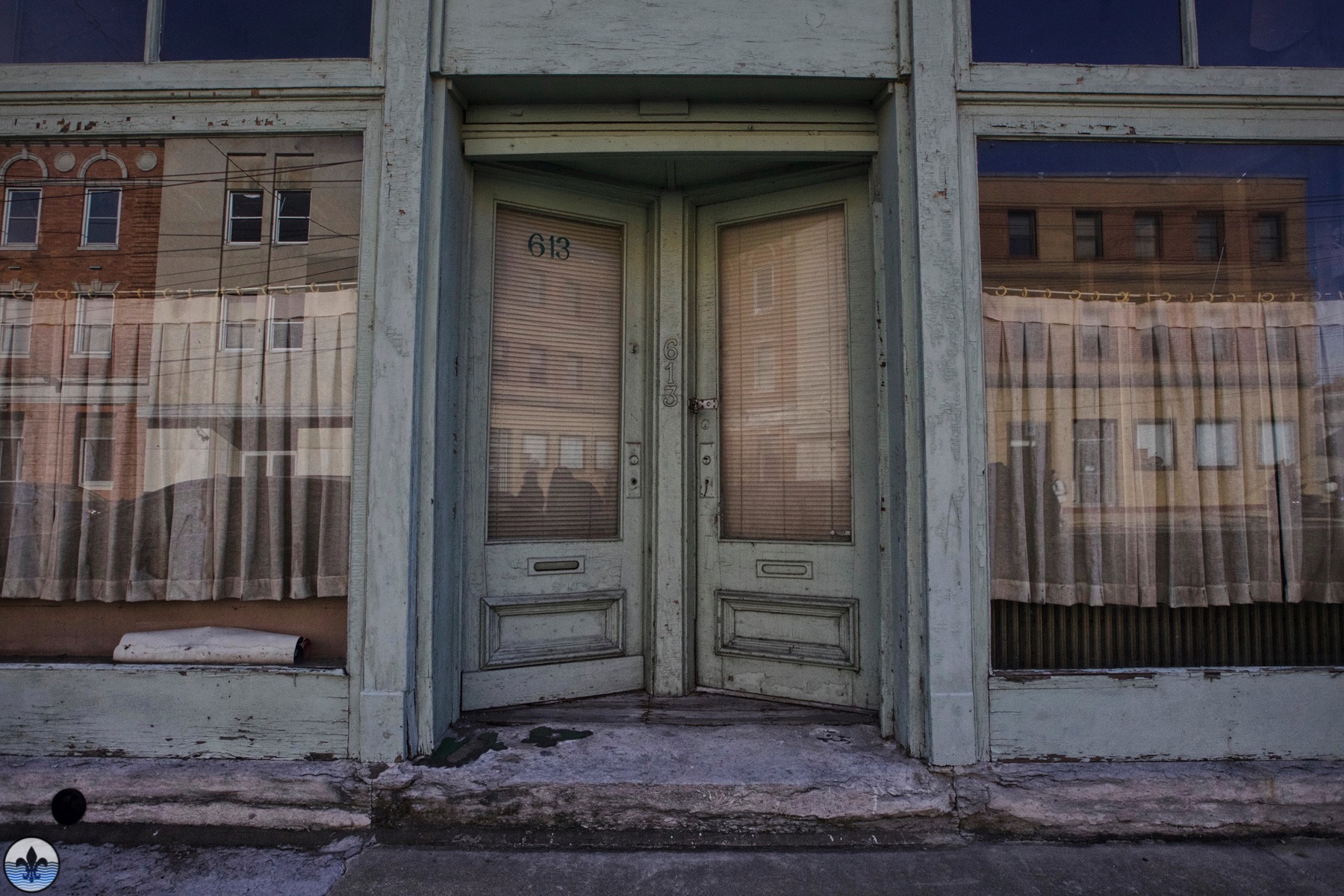 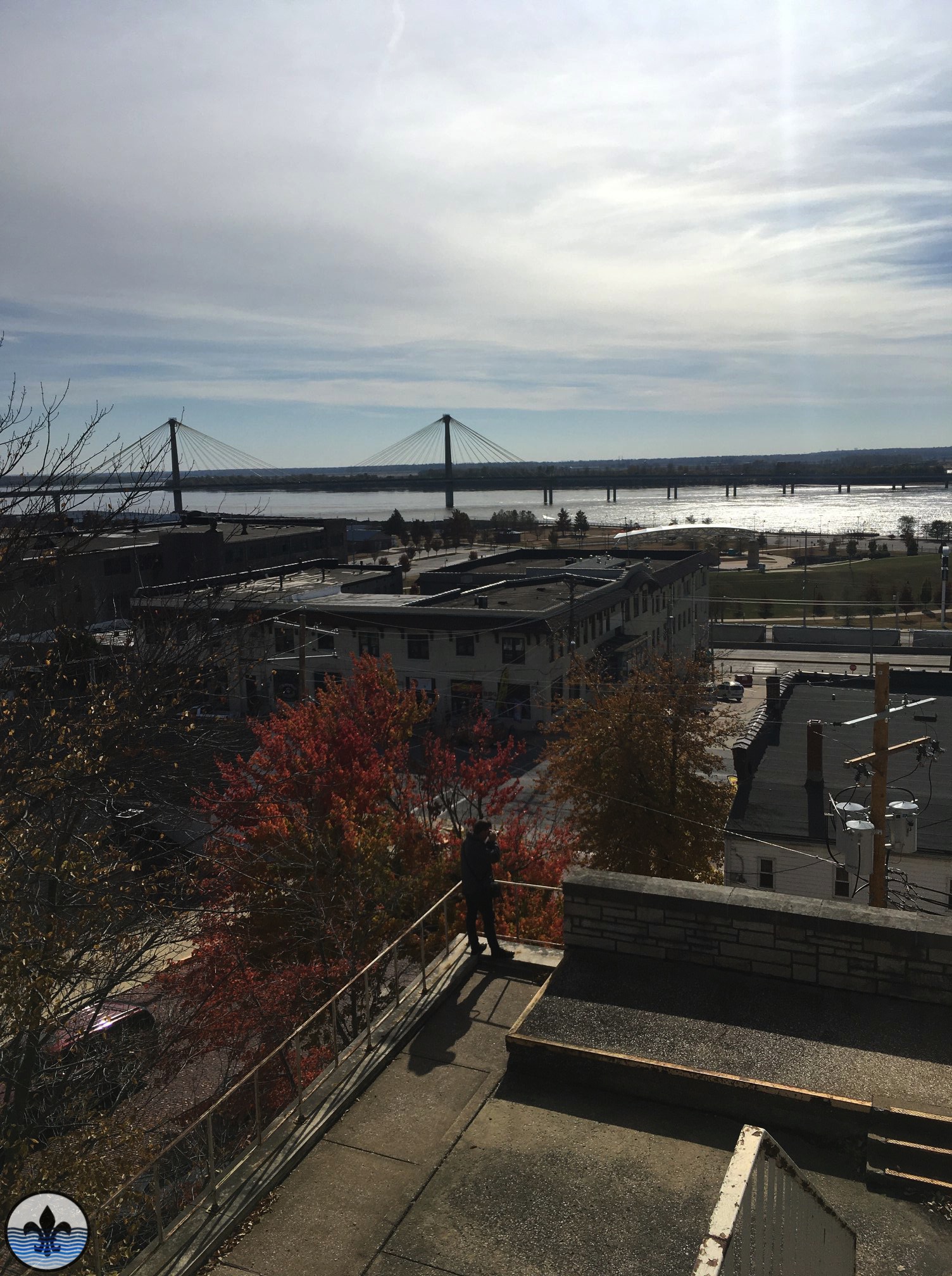 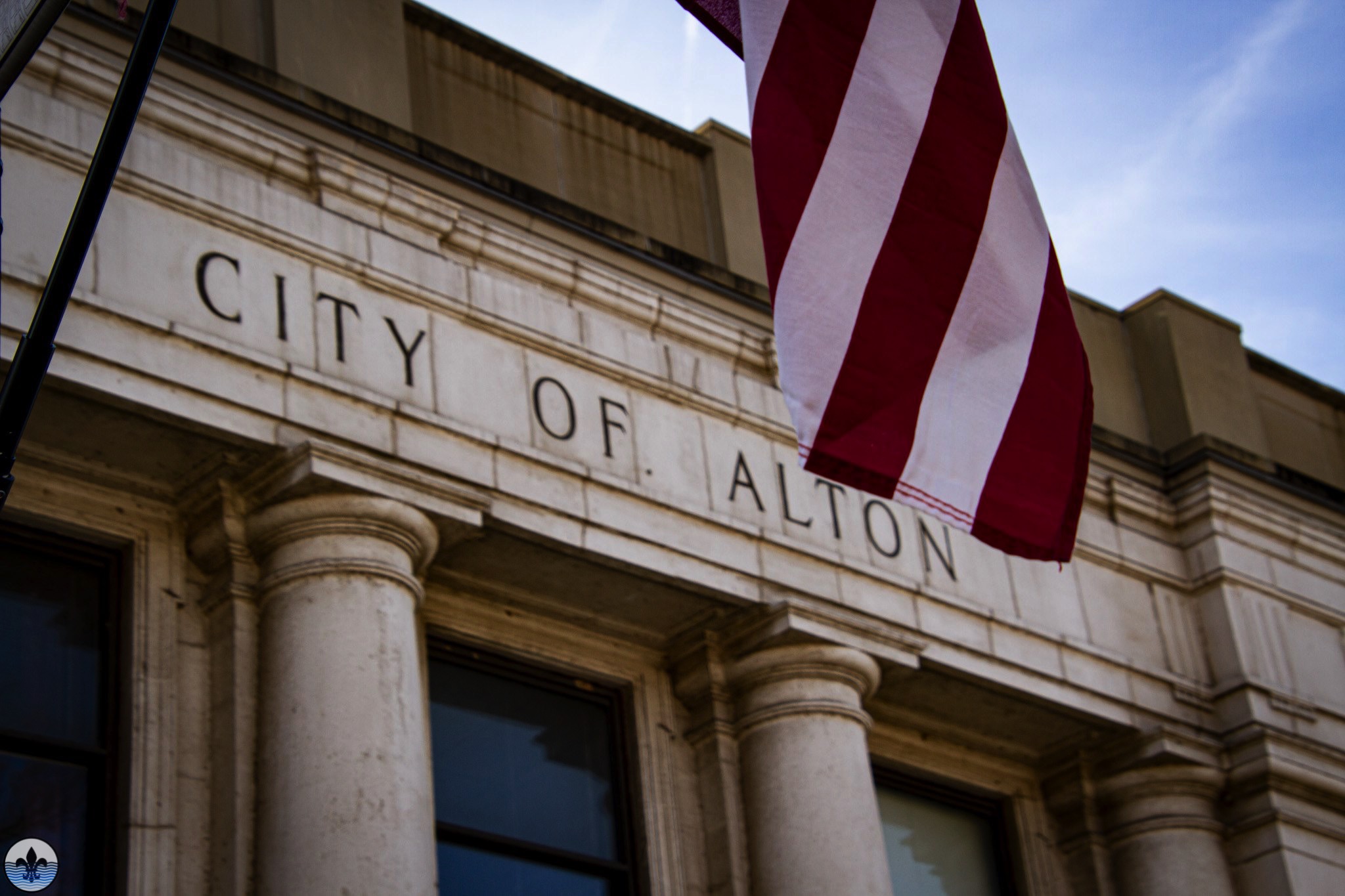 Compared to the wondrous legends already mentioned, Alton’s origin as a town is a bit more mundane. The city’s first developer was a man named Rufus Easton. In 1818, he set up a ferry business to cross the Mississippi and named the surrounding settlement after his son. Easton’s timing was fortuitous. Surrounded by agricultural communities, Alton fast became a major portal for those goods leaving southern and central Illinois, a fast-developing state founded in the same year as Alton. By the 1830’s, an idea to move the State capital from Vandalia began to flourish, and Alton was among the proposals seriously considered. At the time, the city was one of the largest and healthiest in Illinois, and won the initial public vote for relocation. Alton eventually lost the bid in legislative assembly, and Springfield, a town at the time of only 900 residents (a population similar to present day Grafton), was selected.

The legislative loss did not diminish the city’s growth or lessen its significance. Alton continued to expand in population, manufacturing and commerce throughout the next century. 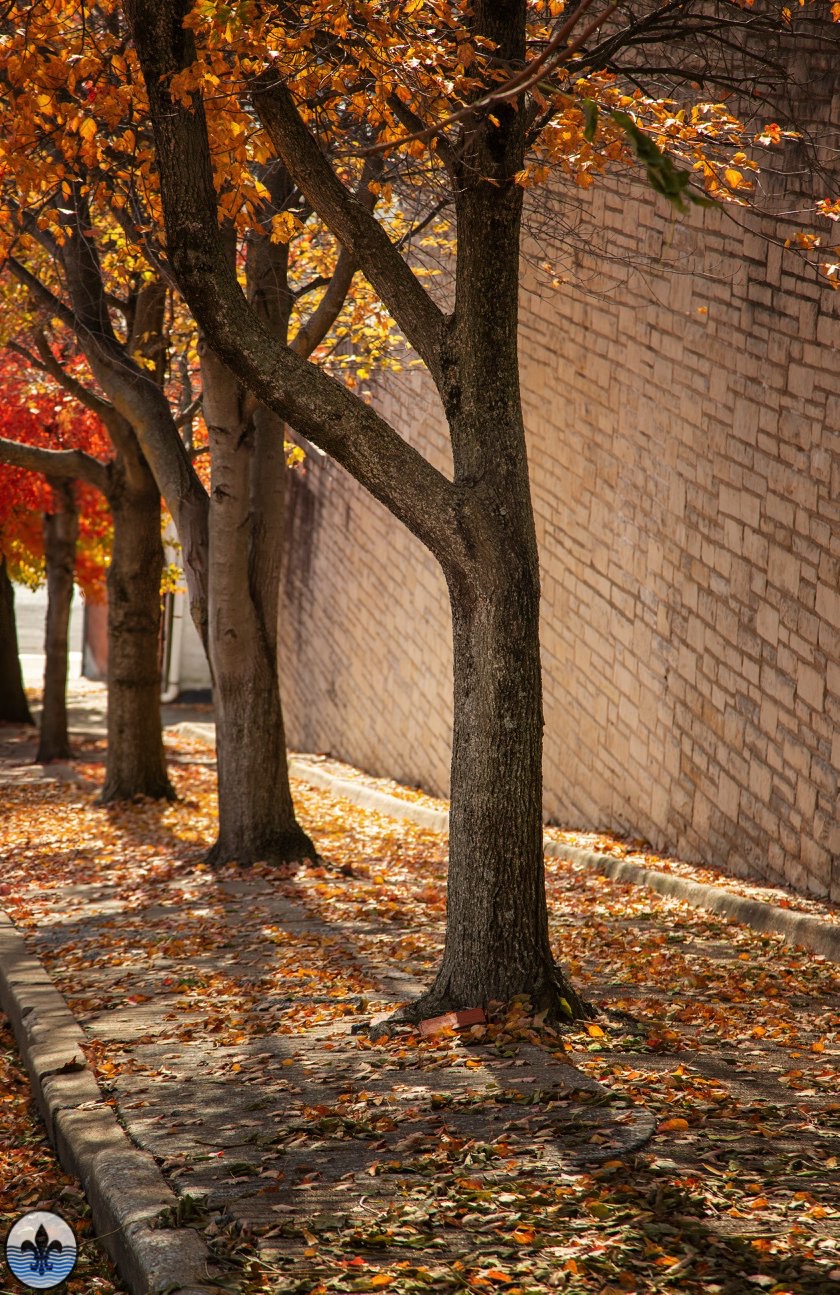 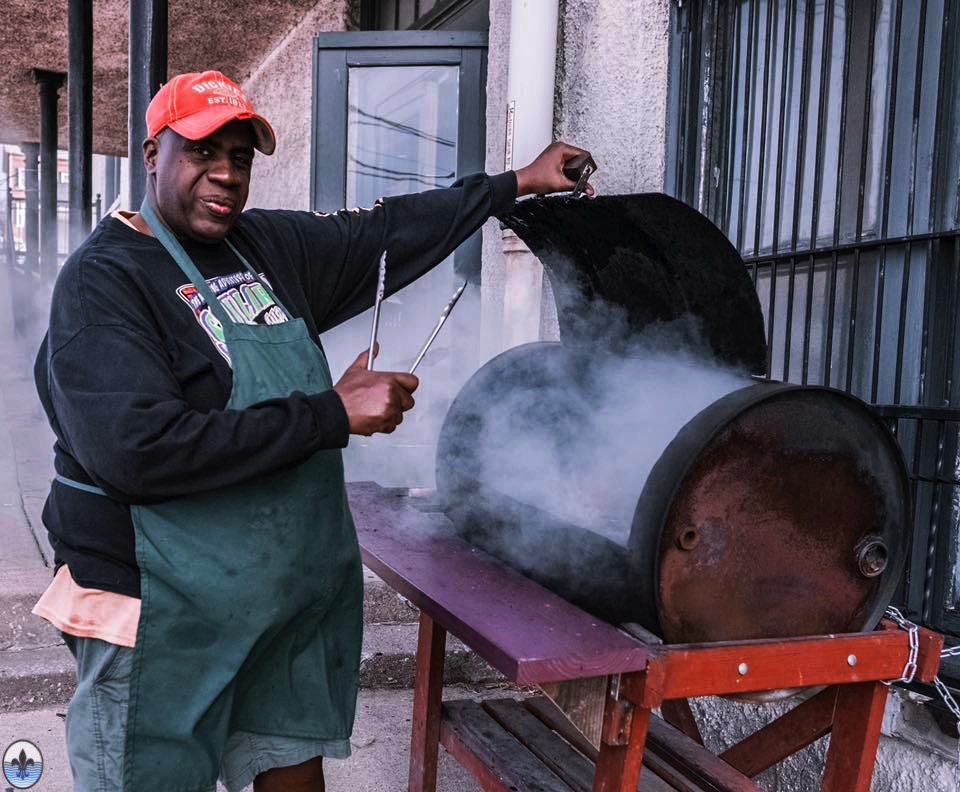 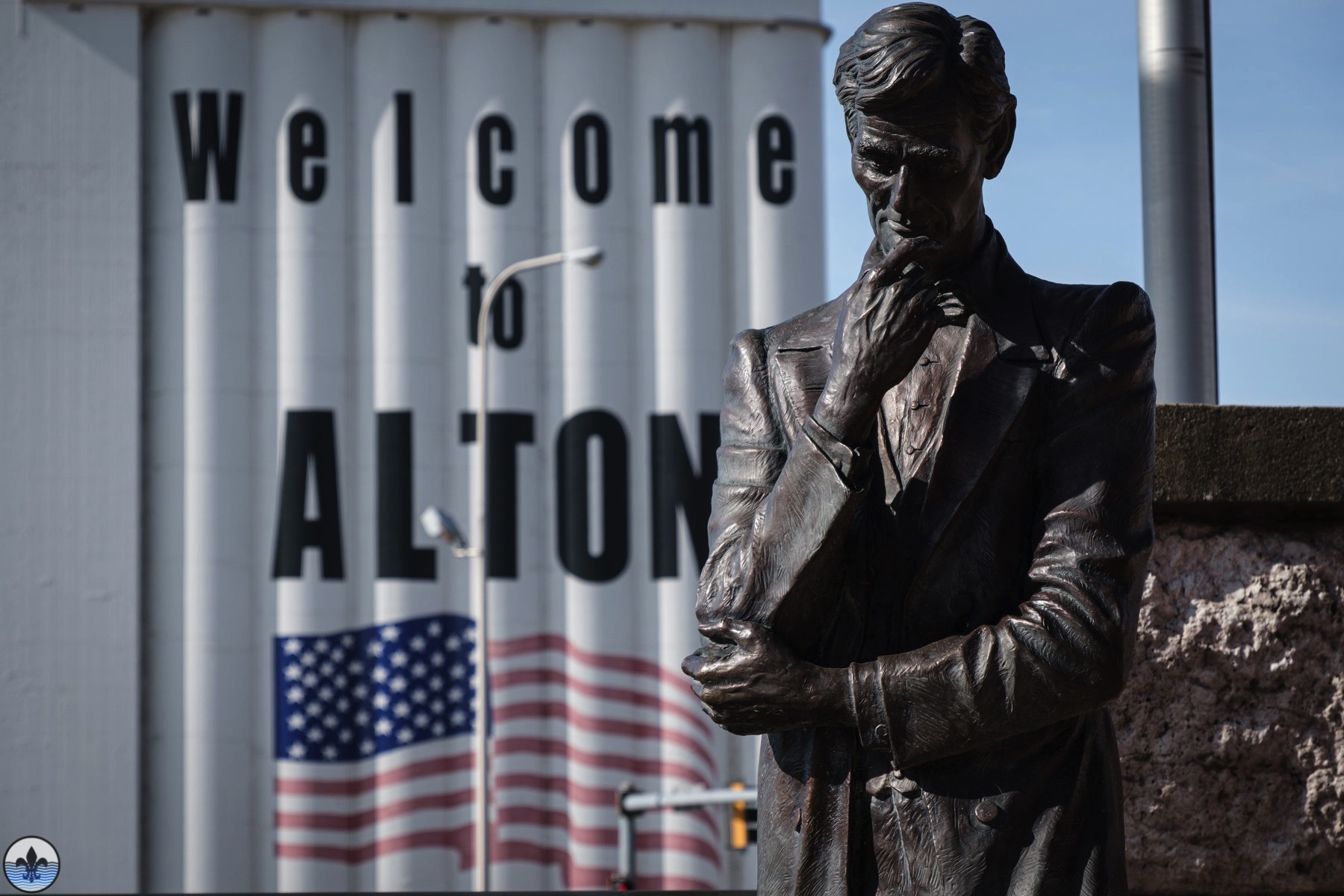 Though Illinois was founded as a free state, southern Illinois, which was largely settled by southerners, fostered views during the Civil War years that were sympathetic, if not wholly supportive, of the south. Alton, as that region’s major commercial port, thereby sat at an odd crossroads of ideology and of racial tensions. What’s more, many of Alton’s industries had key financial partners in St. Louis, a city located in a slave-holding state. It may seem surprising then that, in the years before the Civil War, Alton would became a stronghold for abolitionists, and an important segment of the Underground Railroad.

A little background, including a summary of a series of truly brutal events, provides a clearer picture. In 1836, a freed slave named Francis McIntosh was arrested by two police officers while on a steamboat along the St. Louis levee where he worked. On the way to the station, McIntosh stabbed both officers, killing one (records suggest this was in response to being told he would serve a long sentence). He fled the scene, but was later apprehended and taken to the St. Louis jail. Soon, a mob broke into the jail, pulled McIntosh from his cell, and dragged him to the present day intersection of 7th and Chestnut Streets. There, they tied him to a tree, piled wood up around him, and lit it on fire (which they kept burning throughout the night). To witness McIntosh’s death, a crowd of hundreds had gathered, and the burned corpse continued to attract revelers for days after the event. The savage attack earned a negative reputation for St. Louis, especially in northern cities. Shortly after the incident, abolitionist newspaper editor Elijah Lovejoy recounted the horrific event in his St. Louis paper, and suggested that the city had devolved into lawlessness. Afterward, he had to flee Missouri for his own safety. Less than a year later, Lovejoy was murdered by a pro-slavery mob in Alton, and his printing press was thrown into the River. The story of Lovejoy’s death caused a refocusing on the events of the McIntosh lynching, which together helped to increase abolitionist support across the country, including from a young Abraham Lincoln who would recount the event in his Lyceum Address speech, “Turn, then, to that horror-striking scene at St. Louis. A single victim was only sacrificed there. His story is very short; and is, perhaps, the most highly tragic, if anything of its length, that has ever been witnessed in real life. A mulatto man, by the name of McIntosh, was seized in the street, dragged to the suburbs of the city, chained to a tree, and actually burned to death; and all within a single hour from the time he had been a freeman, attending to his own business, and at peace with the world.” 20 years later in 1858, while in Alton to conduct the last of the seven Great Debates with Senator Stephen Douglas, Lincoln would raise the issue of slavery again, in oration that would precursor his positions as United States President.

While it is too strong a statement to say that Alton’s residents universally opposed slavery, it is true that events within Alton were catalysts of the movement to end slavery, and that’s not even to mention the ways in which the city supported the Union during the War itself. 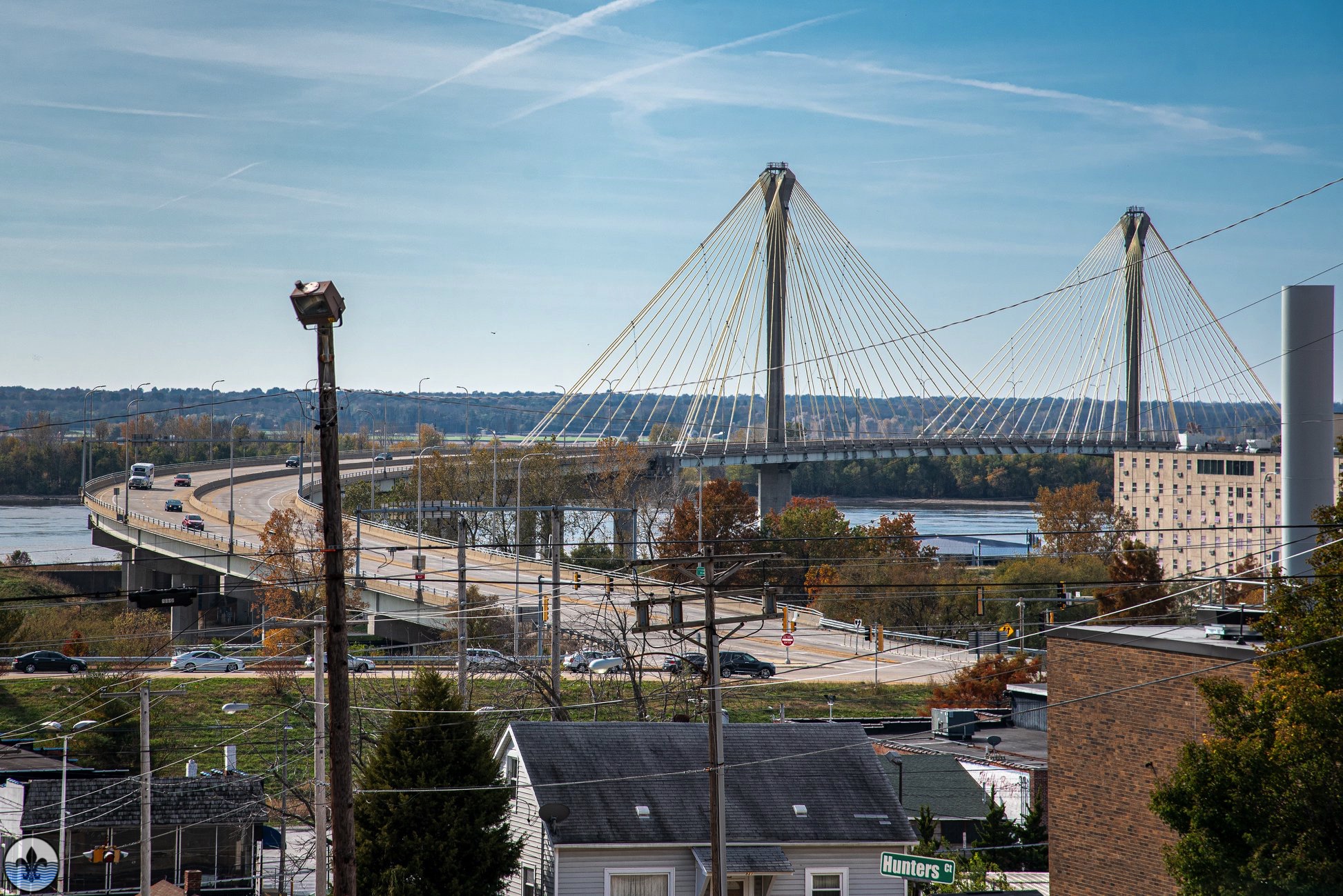 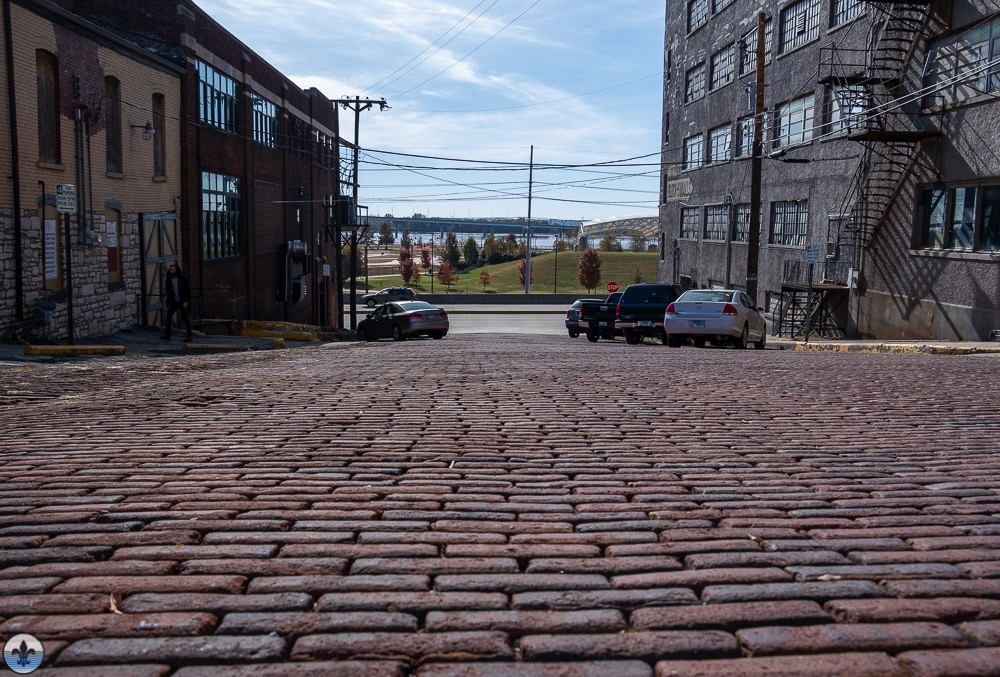 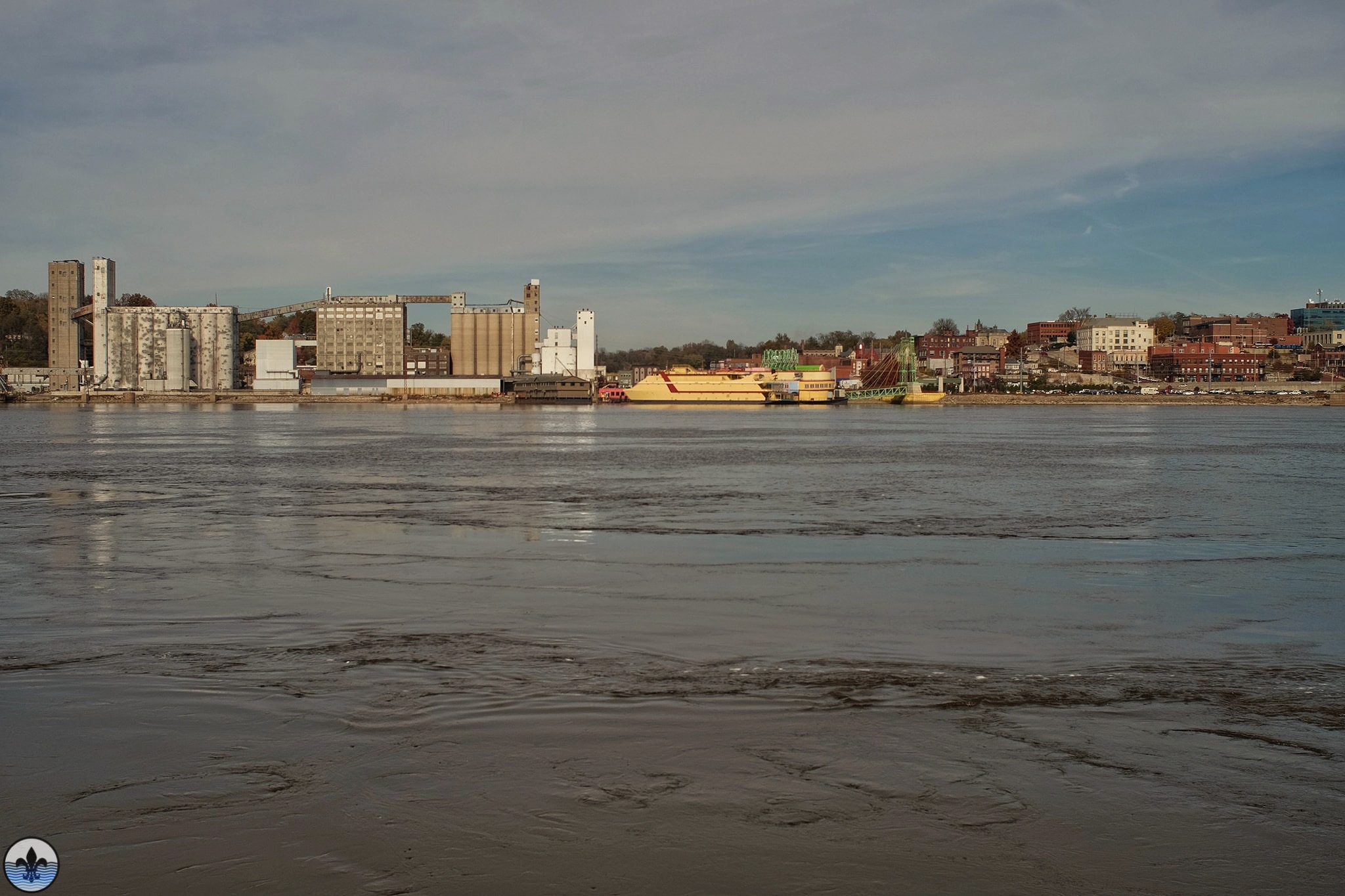 As already mentioned, Alton is that odd mix of intangible things that make it difficult to emulate. Something about the severe upward slope from the riverfront, where buildings and light intermingle at odd exchanges, makes the city extremely fertile for photography and for exploring on foot. A couple of turns can take you away from breathtaking views out over the river to clicking your heels over cobblestone in residential streets lined with incredible Victorian mansions, or from the quiet hum of looming grain silos to the thrum of cafes, trendy shops, theaters, breweries, art galleries and eateries (or so it will soon). It is a rare place, where in a couple of turns, you can encounter history, mystery, beauty and the ready determination of a city reinvigorated. 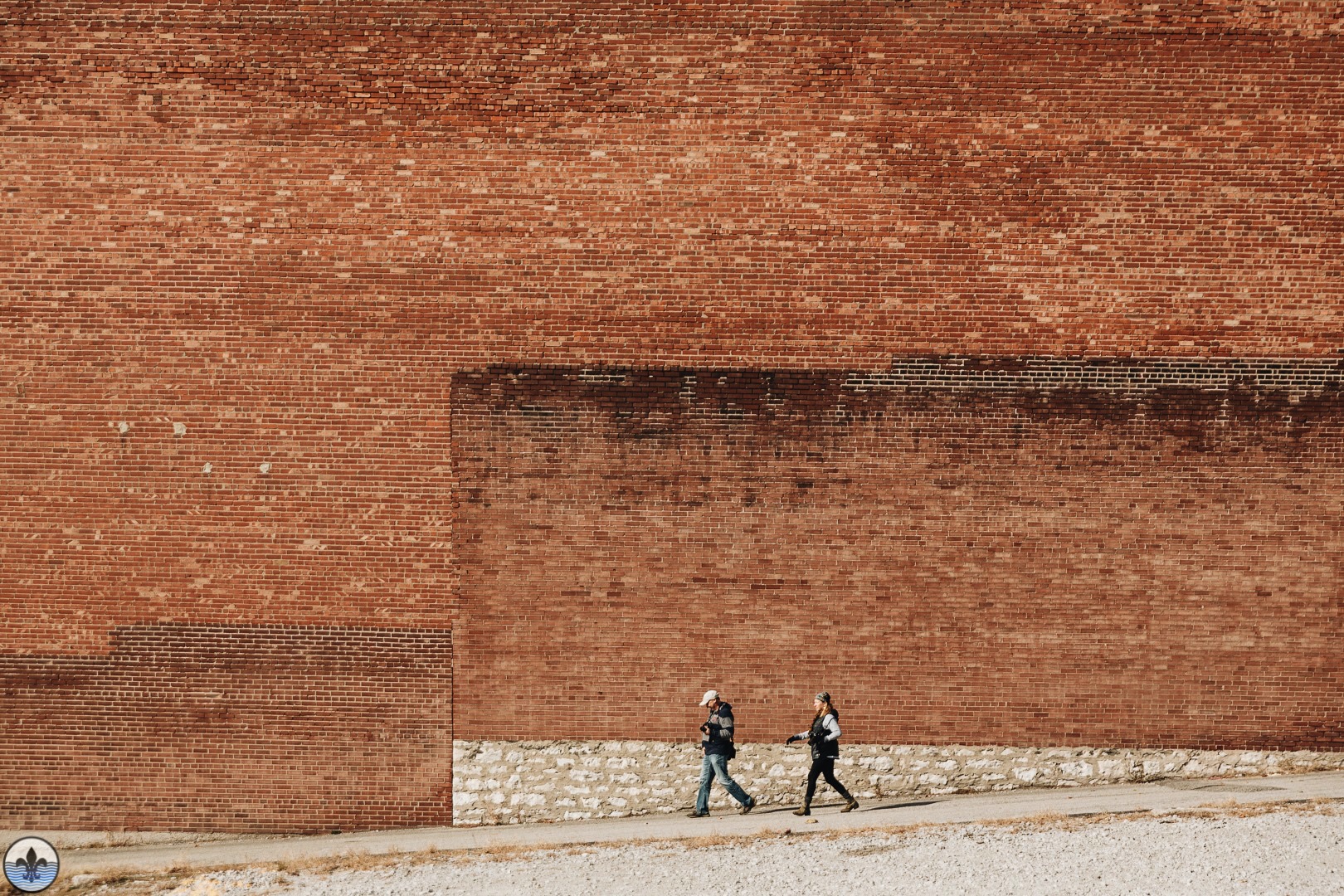 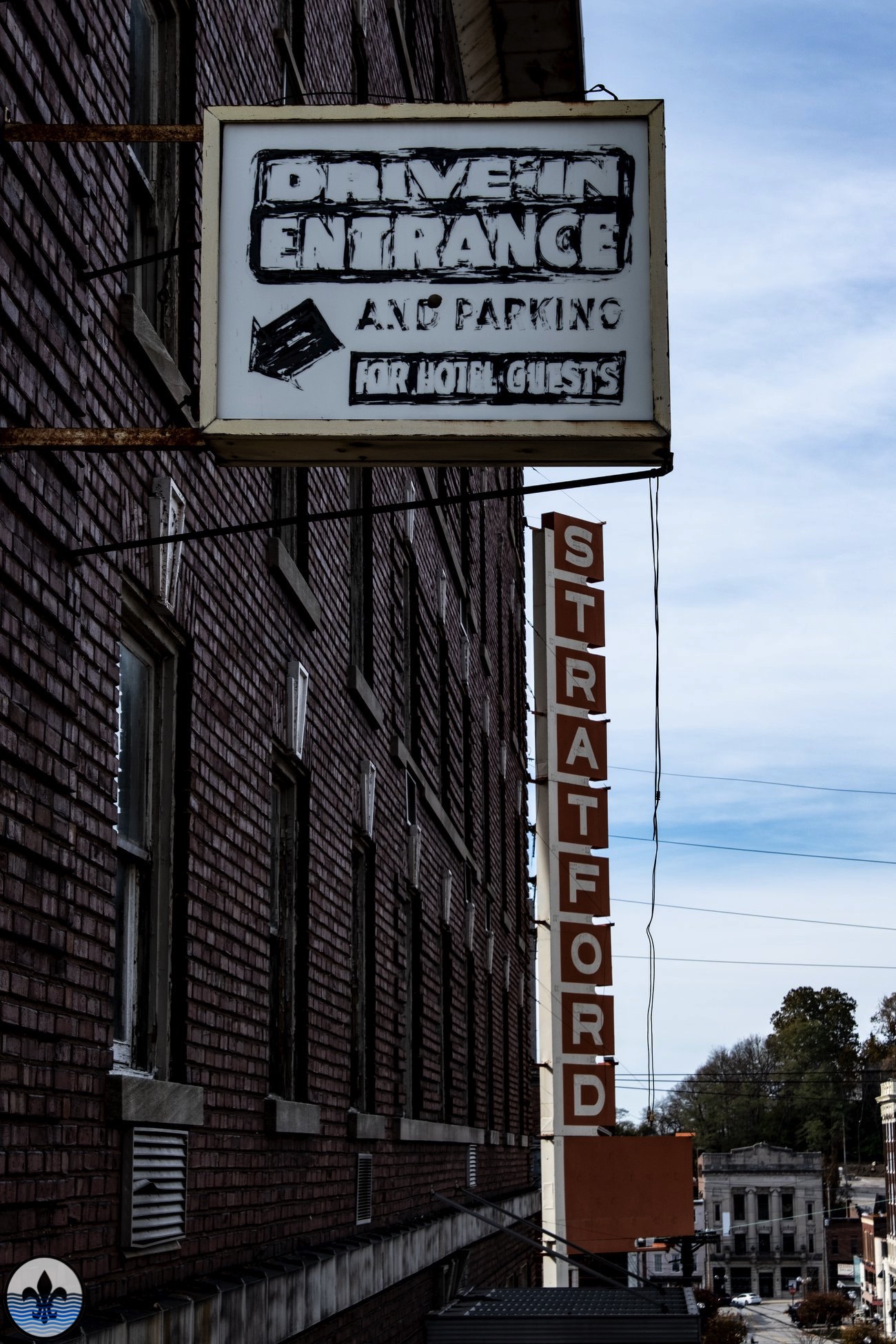 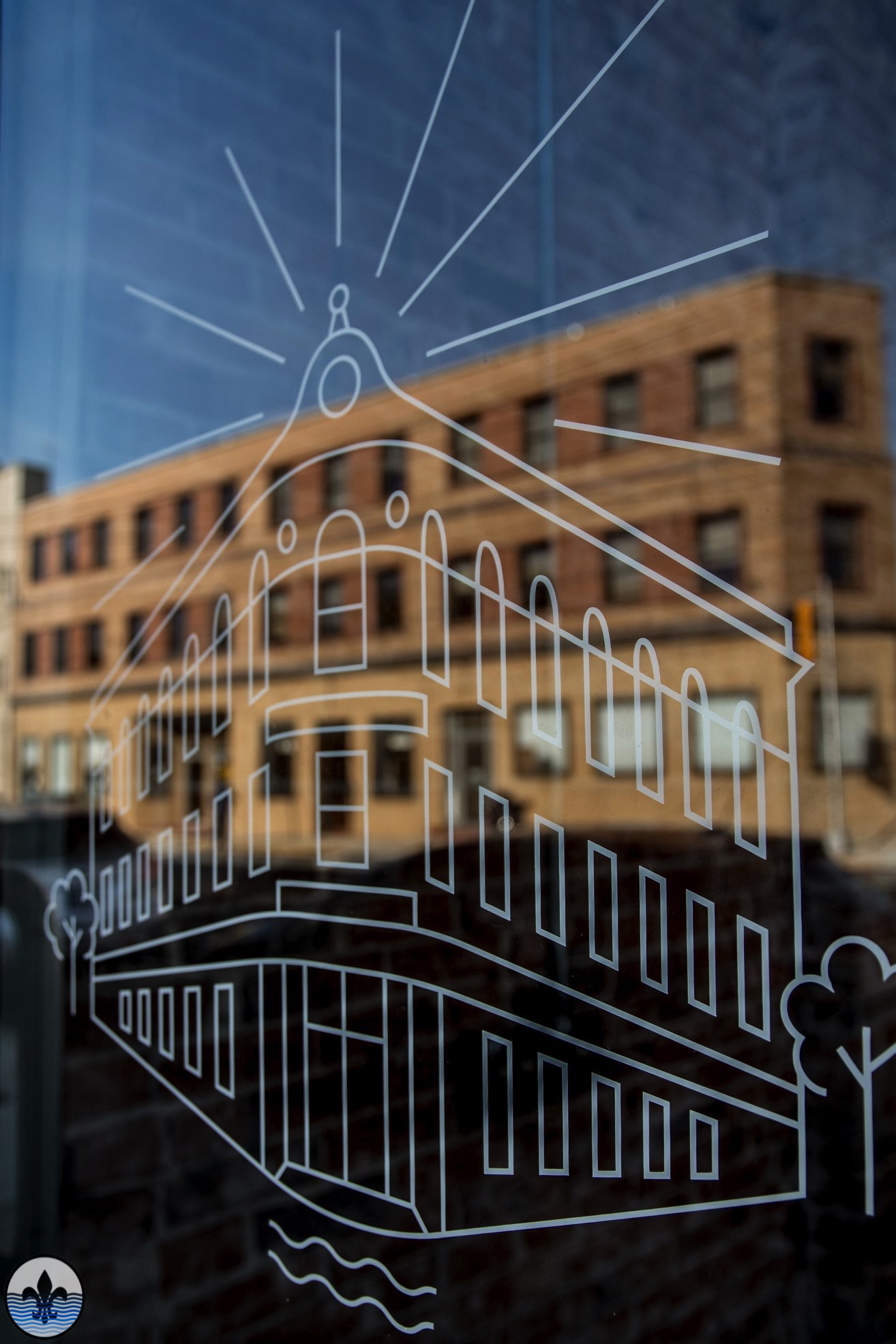 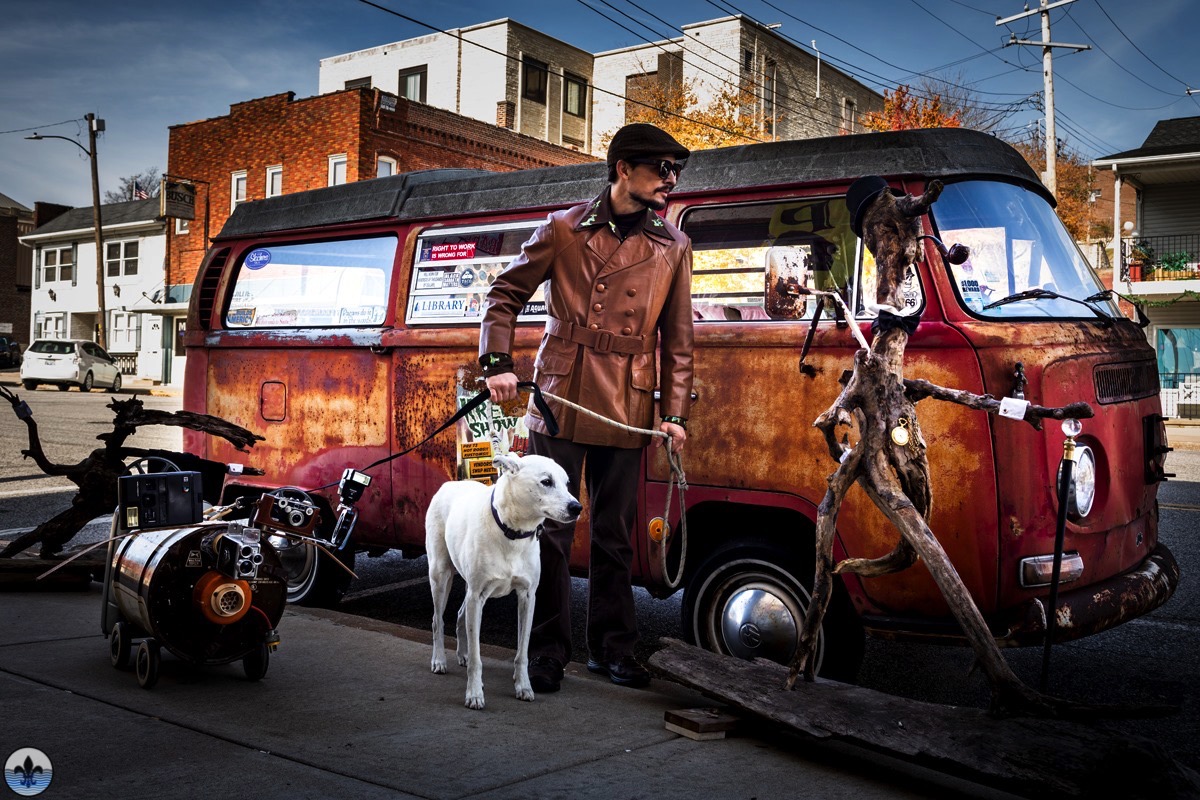 Our partner on this event, AltonWorks is a visionary project for both the city of Alton, and for systemic revitalization for all of downstate Illinois.

“AltonWorks is a development company with a vision for the revitalization of downtown Alton. The company is driven by the belief that a strong downtown is the foundation of a thriving city. The company represents all of the operating entities that will be a part of the overall project including a leasing company, property management company, real estate company, and a not-for-profit organization.

AltonWorks has offered a vision for the future of downtown Alton with the purpose to catalyze a movement through public and private partnerships to bring hundreds of jobs, new residents, and billions of dollars of economic growth to downstate Illinois.”

Without question, this is an exciting moment for the region, and Alton, in particular. This movement is so different from other efforts of its kind in its focus and in the degree of support that it has, both from the community and from local investors. The next time that we Flood Alton, it will likely be to see the impact of this comprehensive effort. 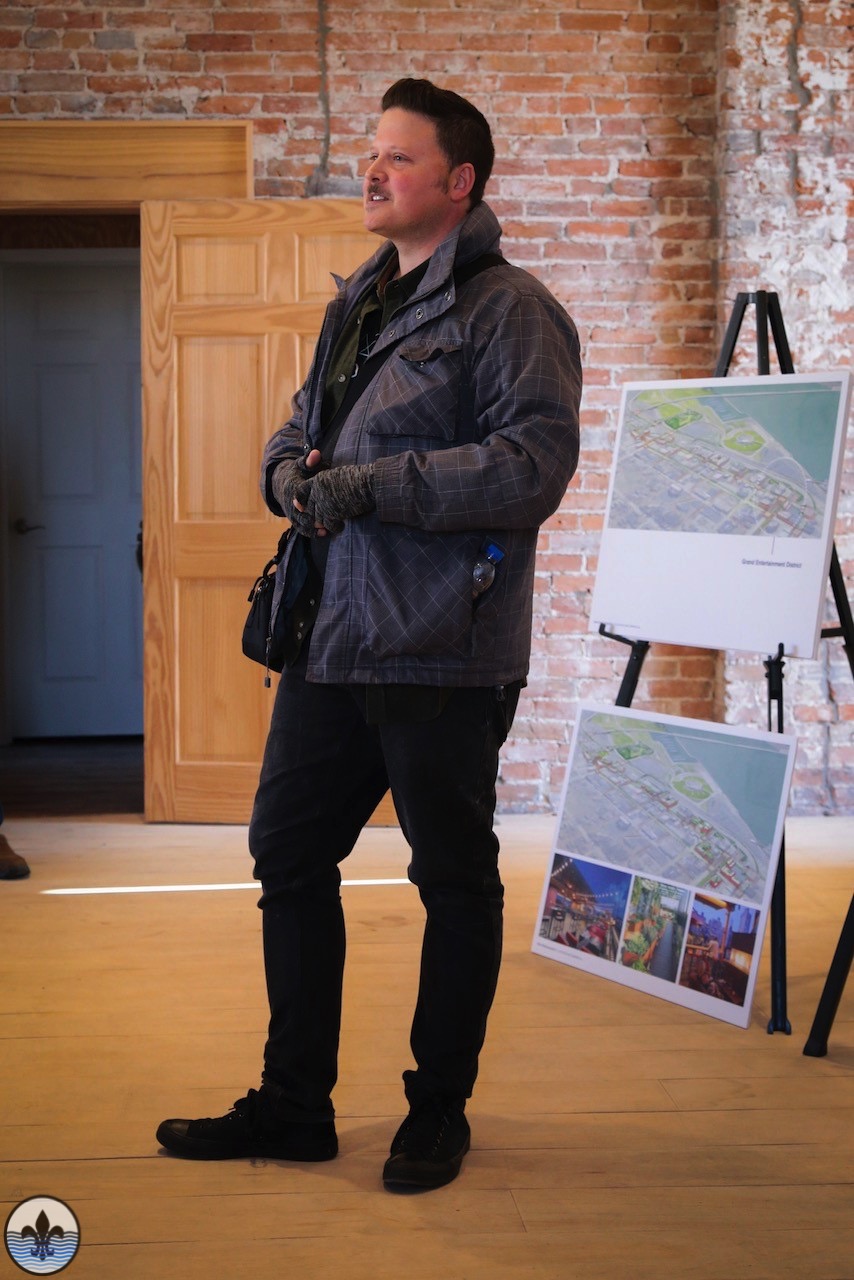 photo by Robert Williams, Jason Gray of PFSTL kicking things off at AltonWorks 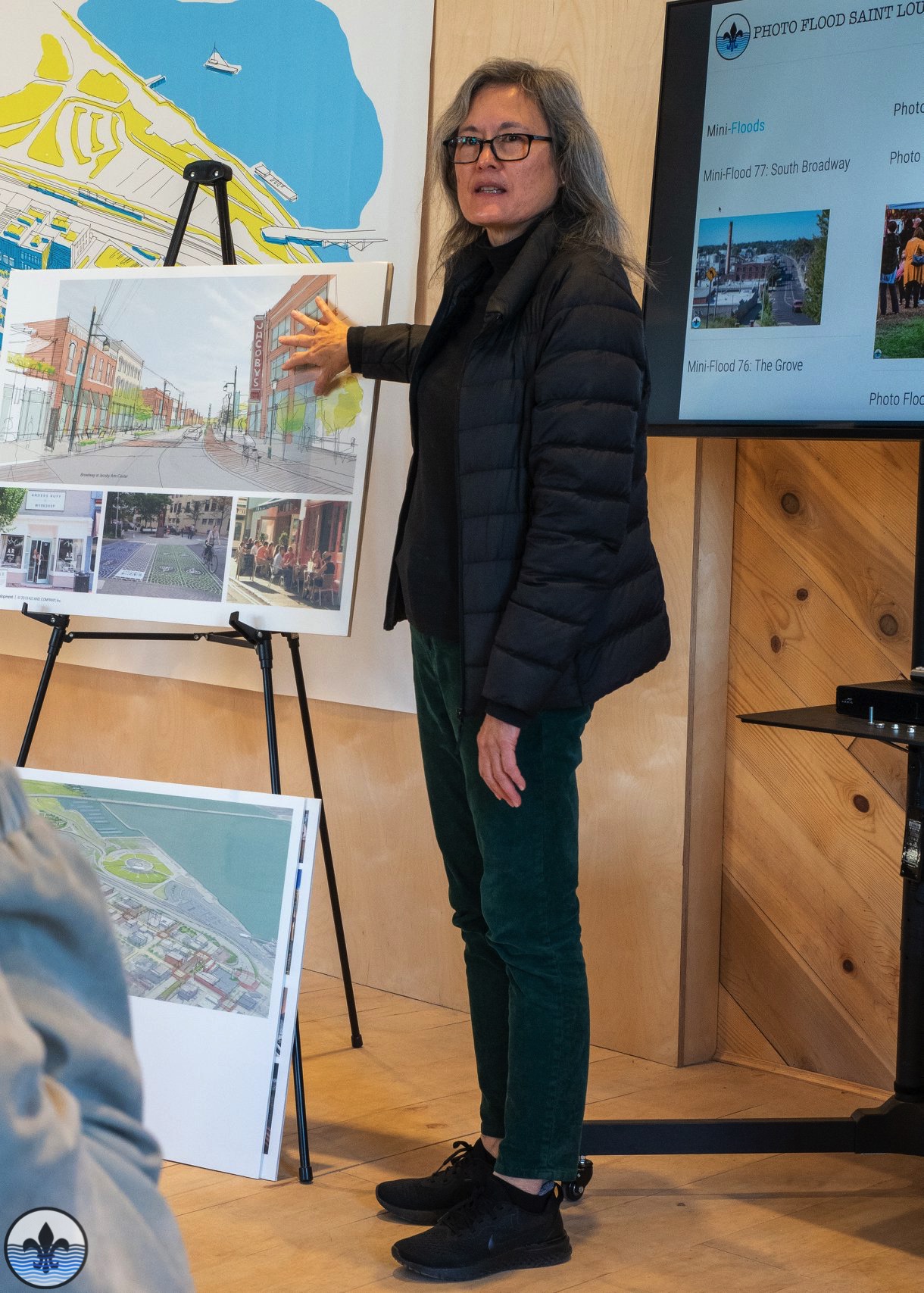 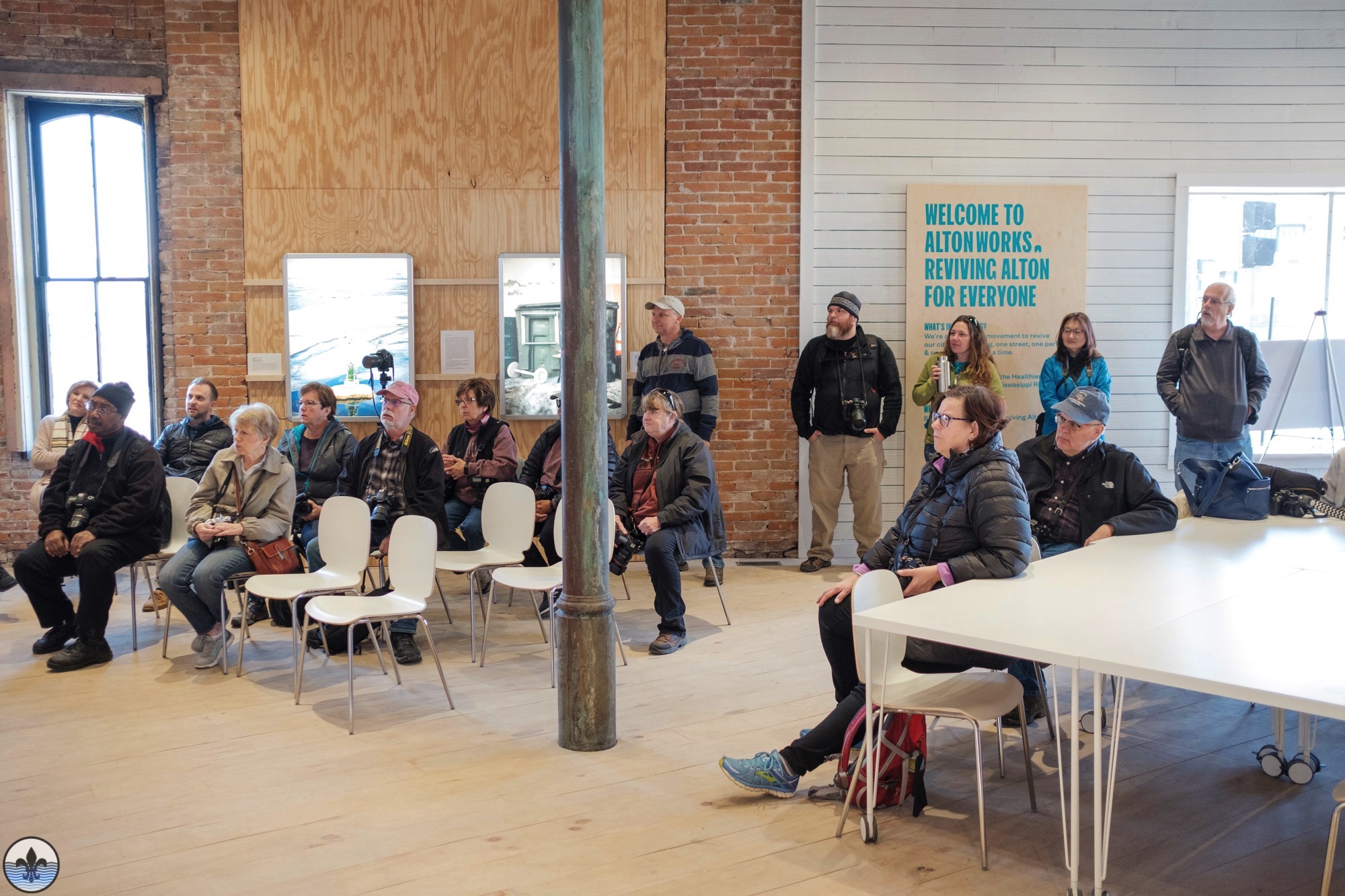 Our endpoint for Photo Flood 86 was Old Bakery Beer, a brewery set in a massive former bread bakery. If you are from St. Louis, you’ve likely seen their beer in stores, but the brewery is so worth a visit all on its own. The food is delicious, the atmosphere is great and the beer is incredible. We definitely recommend it! 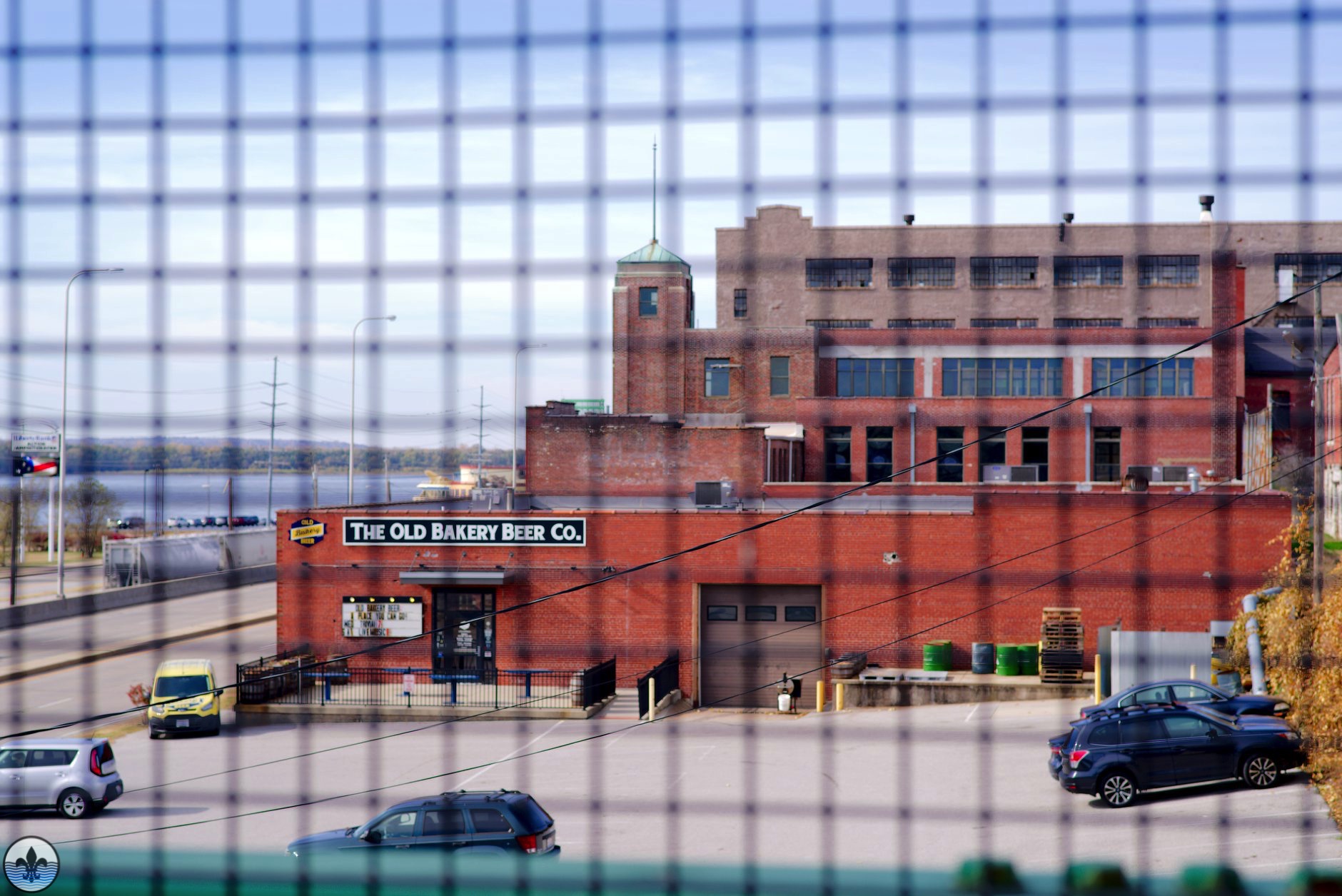 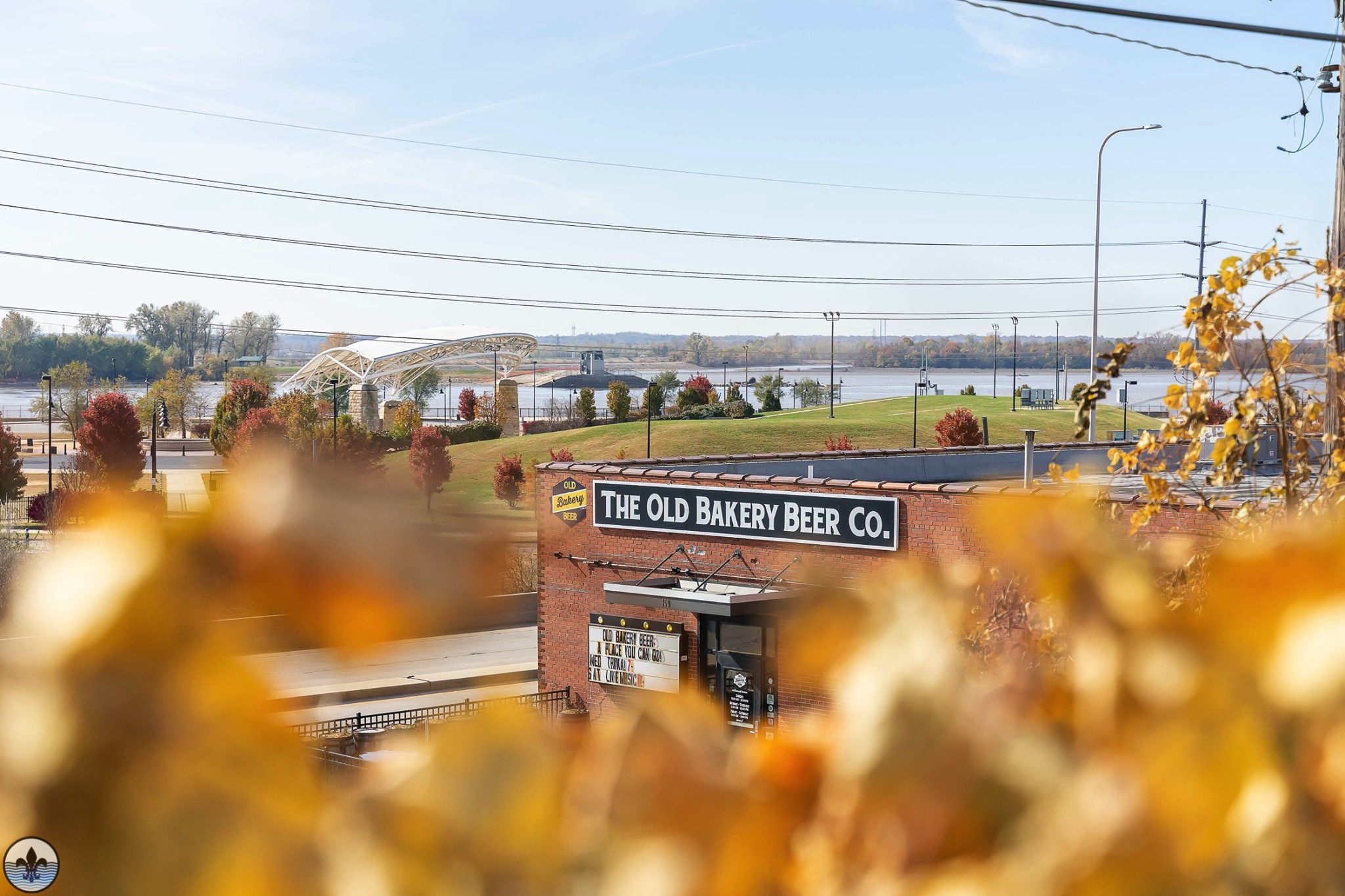 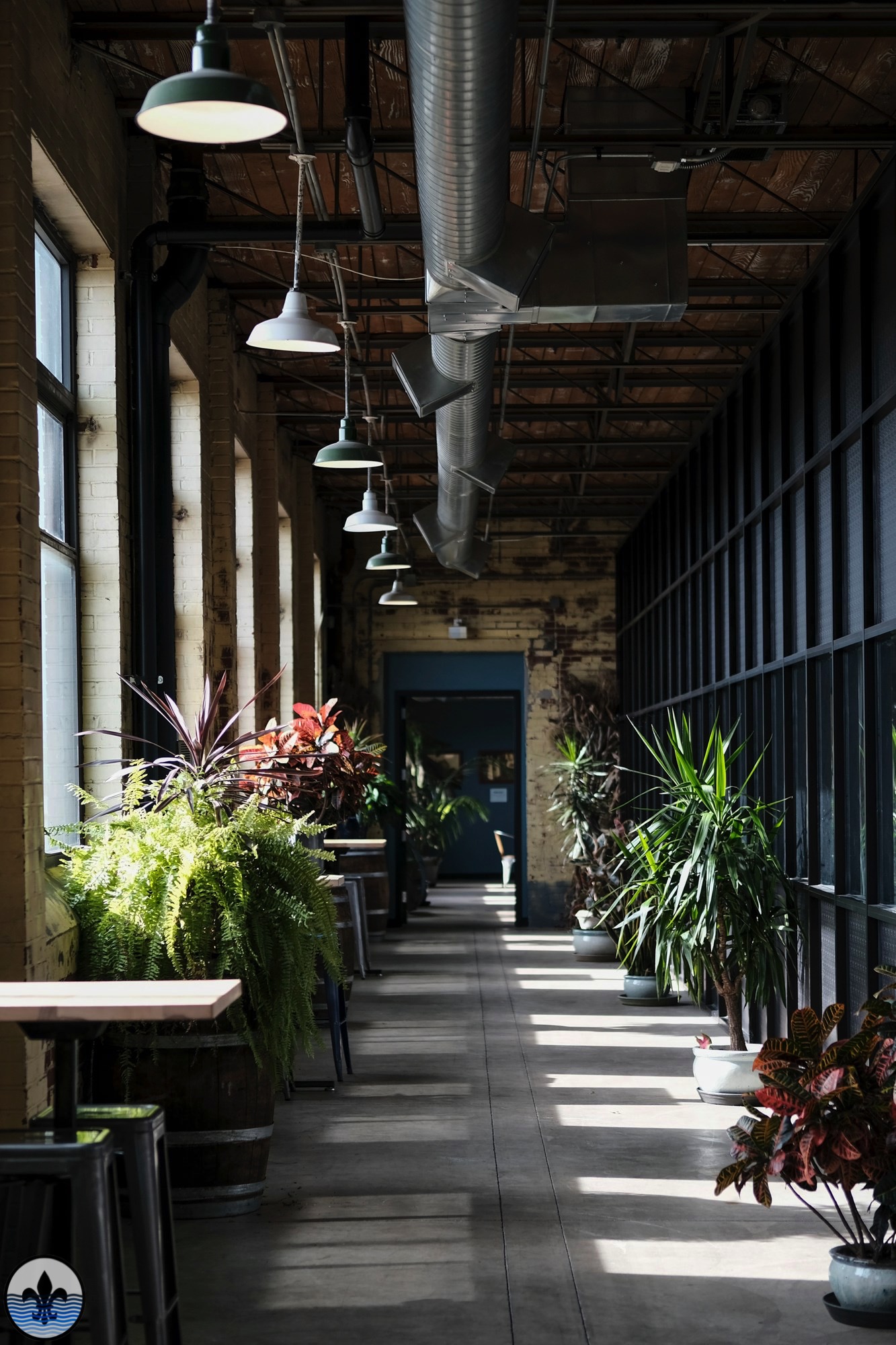