Portage Des Sioux is a quaint, historic village of around 300 residents, along the Mississippi River in Missouri. The community is the location of the Our Lady of the Rivers Shrine, where the annual Blessing of the Fleet Festival occurs, and was site to the Treaties of Portage Des Sioux, which effectively ended the War of 1812 and secured the way forward for the forced removal of Native Americans from their ancestral lands. 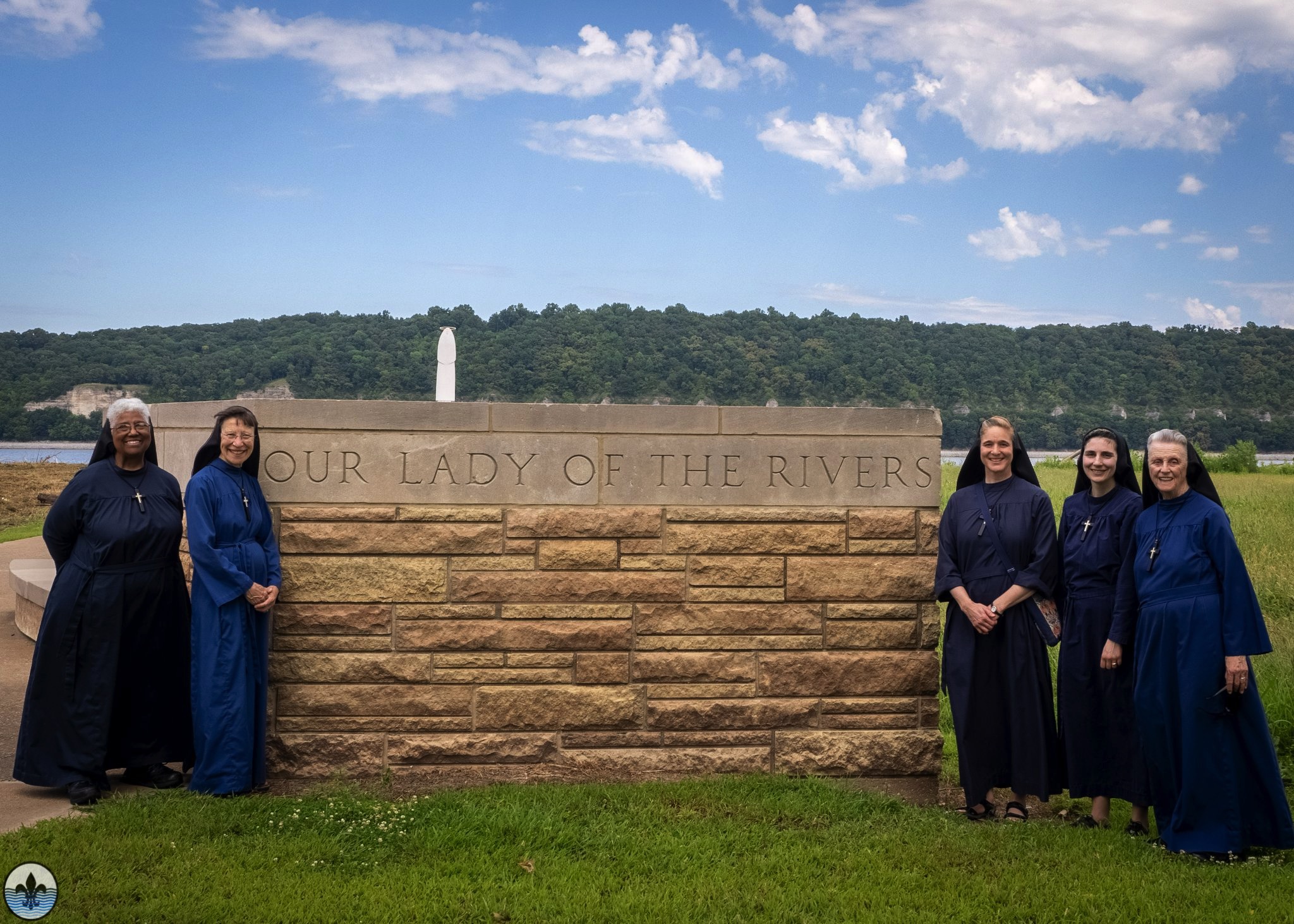 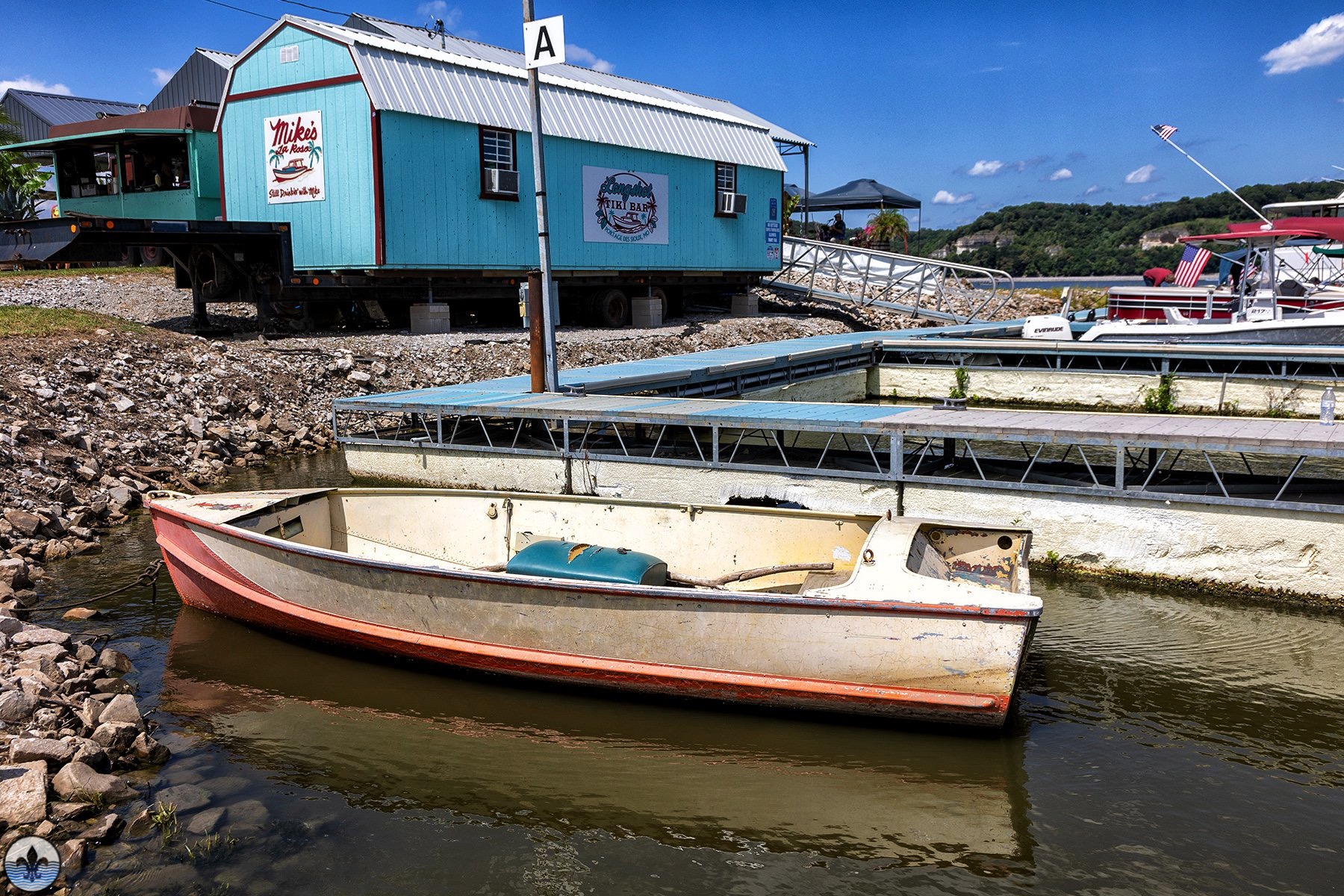 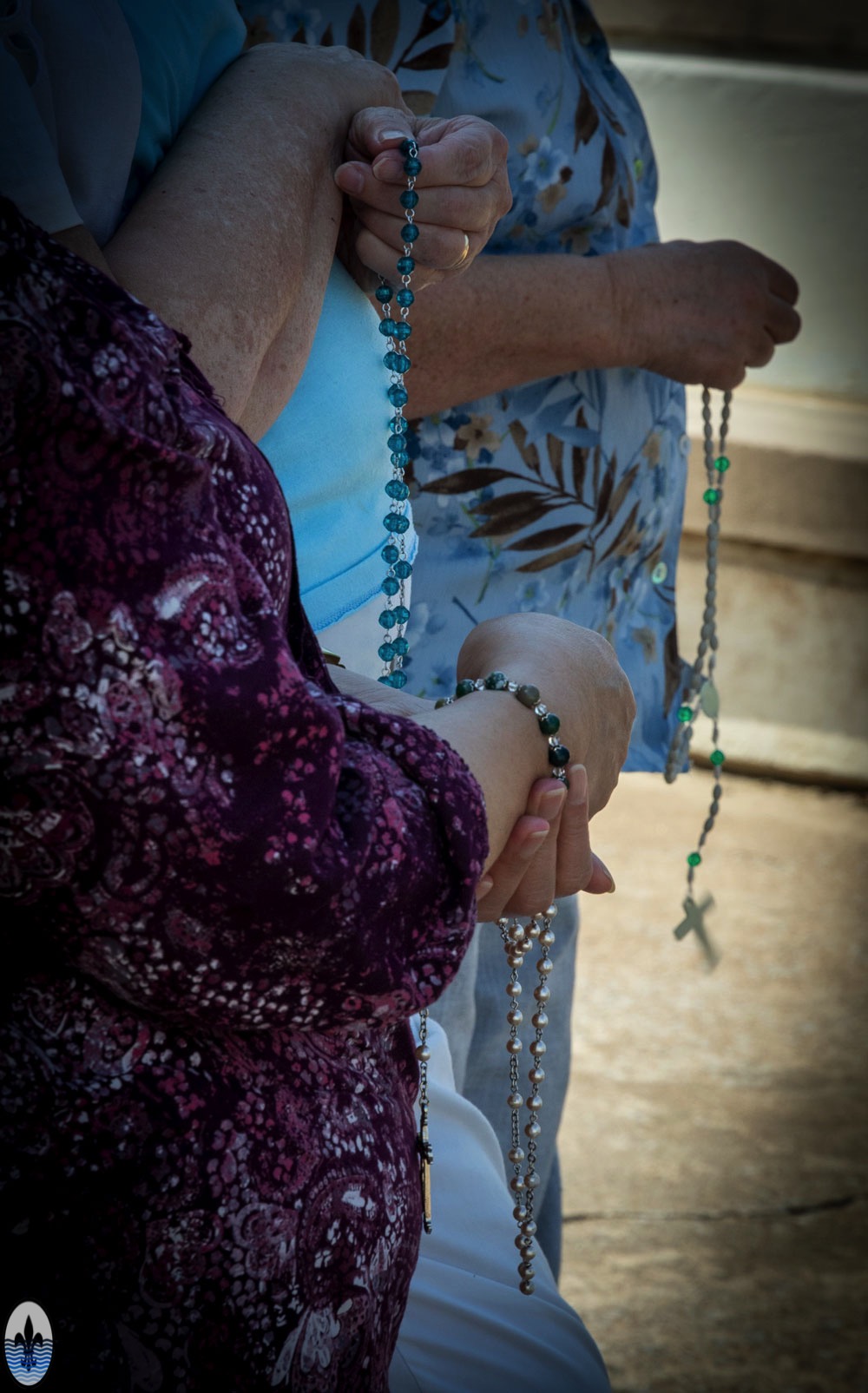 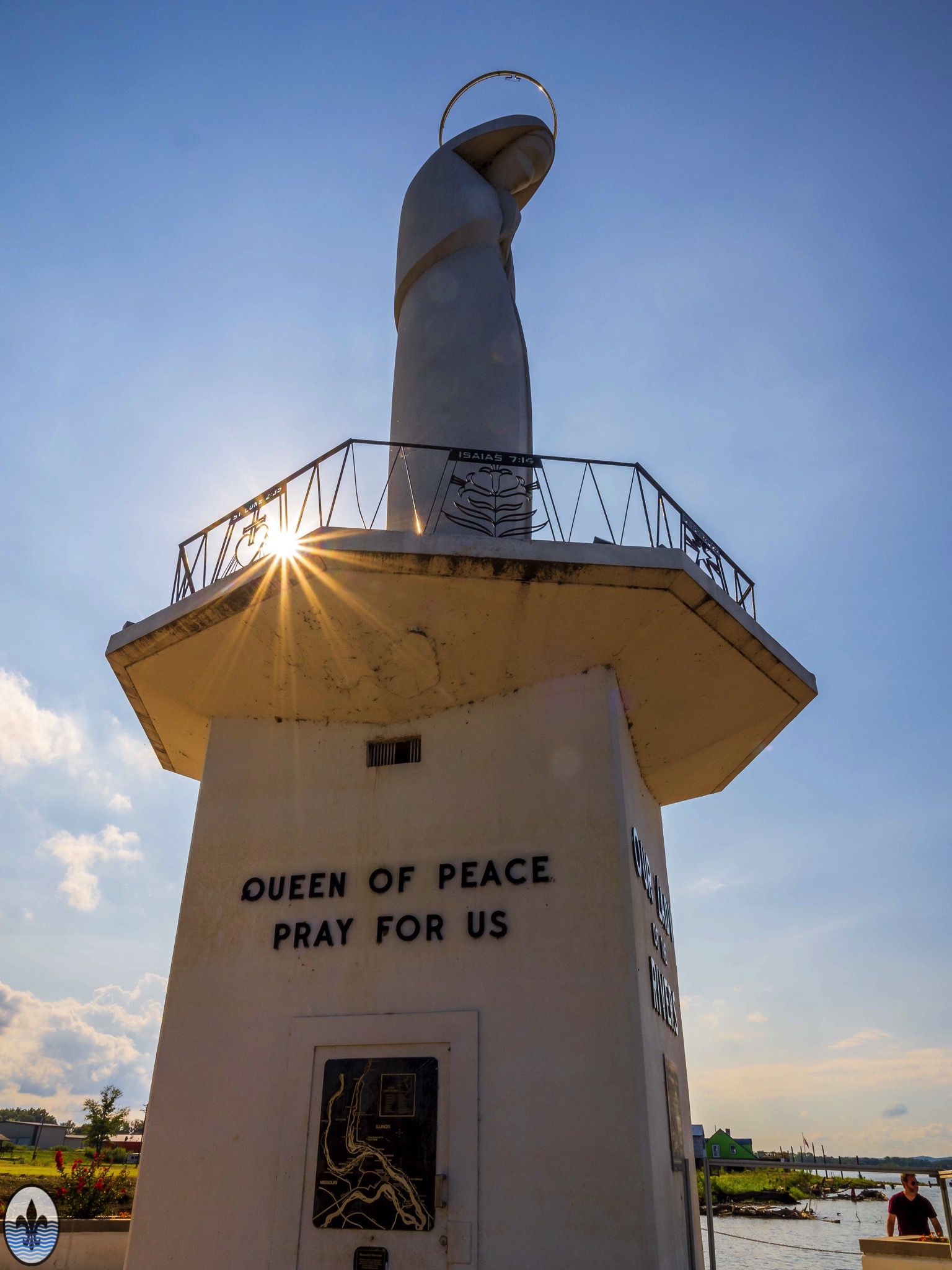 Portage Des Sioux’s name derives from the fact that the land east of town forms a peninsula between the Mississippi River on the north and east and the Missouri River on the south. The Sioux (and presumably other tribes) understood that by portaging their watercraft at this location, and traveling south roughly 2.5 miles, this would save them over 25 miles of paddling upon the water. It is also thought that Native Americans used this overland route to evade European pursuers during regional skirmishes. Unfortunately, those Native Americans were unable to evade the onslaught of American settlers forever.

Primarily, the War of 1812 was a war between the United States and Great Britain, with major battles mostly won or lost at military forts on the east coast and in the deep south. In fact, this War was the source of the American National Anthem, with its “bombs bursting in air” having occurred during a British naval onslaught on Fort McHenry in Baltimore’s harbor. Secondarily, however, the War of 1812 was a frontier struggle between an indigenous confederation of tribes on the verge of nationhood and American settlers pushing the boundaries of their country’s claim further and further west. The 1814 Treaty of Ghent officially ended the War, and outlined that peace be re-established with those Native Americans involved in the fighting.

A commission, including Auguste Chouteau (a founder of St. Louis), Ninian Edwards (namesake of Edwardsville and territorial Governor of Illinois), and William Clark (territorial Governor of Missouri), was created by the President of the United States to organize a council of tribal chiefs to settle the matter, and more than 35 invitations were sent to tribal leaders. Portage des Sioux was selected as a safe location for these delegates to be received by the American commission, though a full force of American soldiers was stationed on standby at nearby Fort Belle Fontaine. The treaties were signed by ten tribes between mid-July and mid-September of 1815. Though officially meant to “restore to such Tribes or Nations respectively all the possessions, rights, and privileges which they may have enjoyed or been entitled to in 1811”, as according to the terms of the Treaty of Ghent, The Treaties of Portage Des Sioux upheld the Jeffersonian notion that Native Americans should be relocated and required to participate in those expectations of American capitalism, like land ownership, acquiring debt, etc. (though without the same levels of political participation and rights afforded to European-Americans). Specifically, Article 3 of the peace treaties states, “The contracting parties, in the sincerity of mutual friendship recognize, re-establish, and confirm, all and every treaty, contract, and agreement, heretofore concluded between the United States and the said tribes or nations.” The clause meant that previous treaties, including the Treaty of St. Louis of 1804 (also signed in Portage Des Sioux) and the Osage Treaty of 1808, which Native Americans considered unfairly obtained, were to be upheld and enforced–an outcome that many of the tribal chiefs did not fully understand. 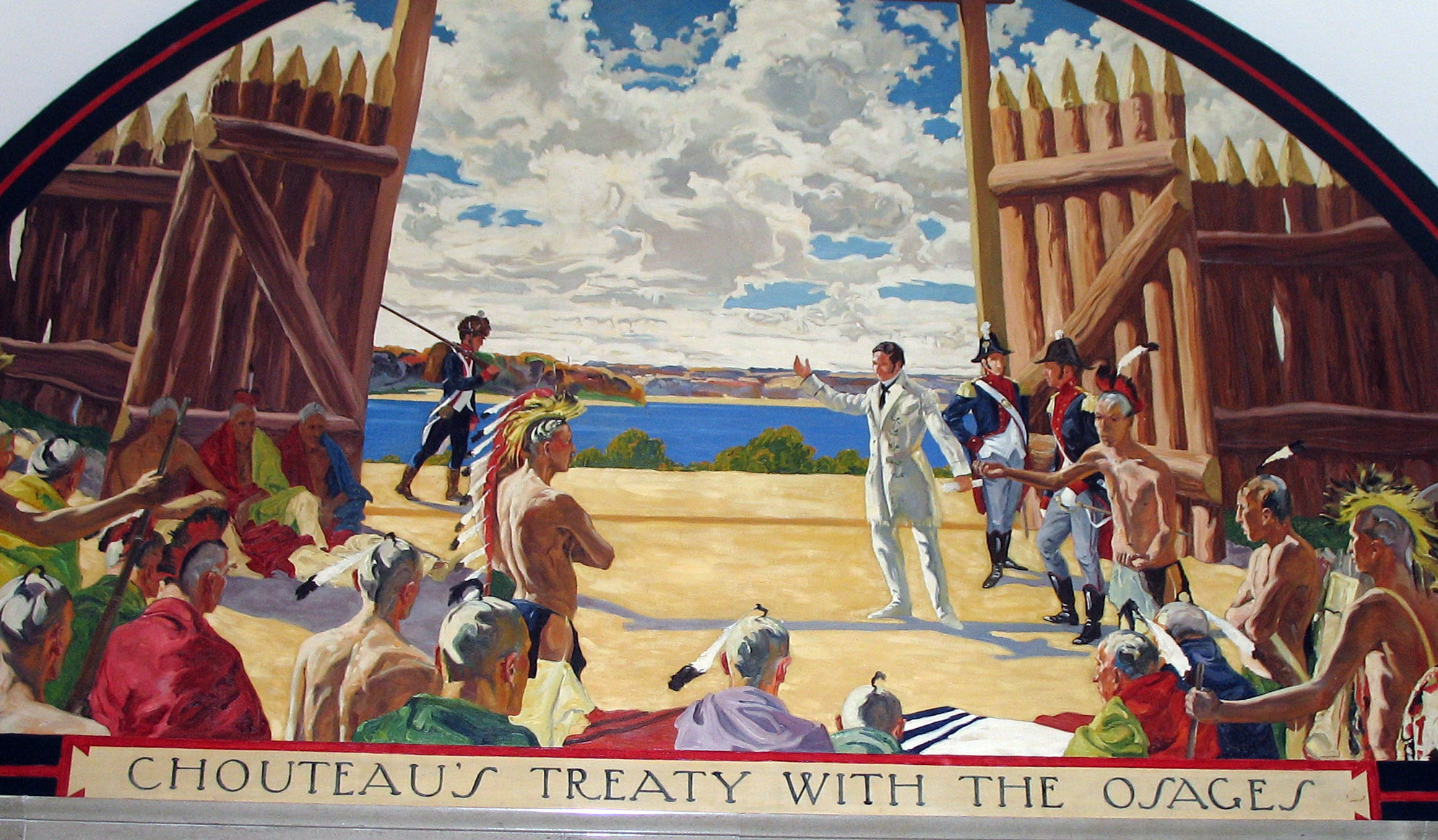 Mural in the Missouri State Capitol depicting the Osage Treaty of 1808.

The Treaties of Portage Des Sioux, and the sentiments of white settlers that they made clear, were wholly responsible for the opening of new territory in the Mississippi River Valley for American expansion and paved the way for Andrew Jackson’s Indian Removal Act. 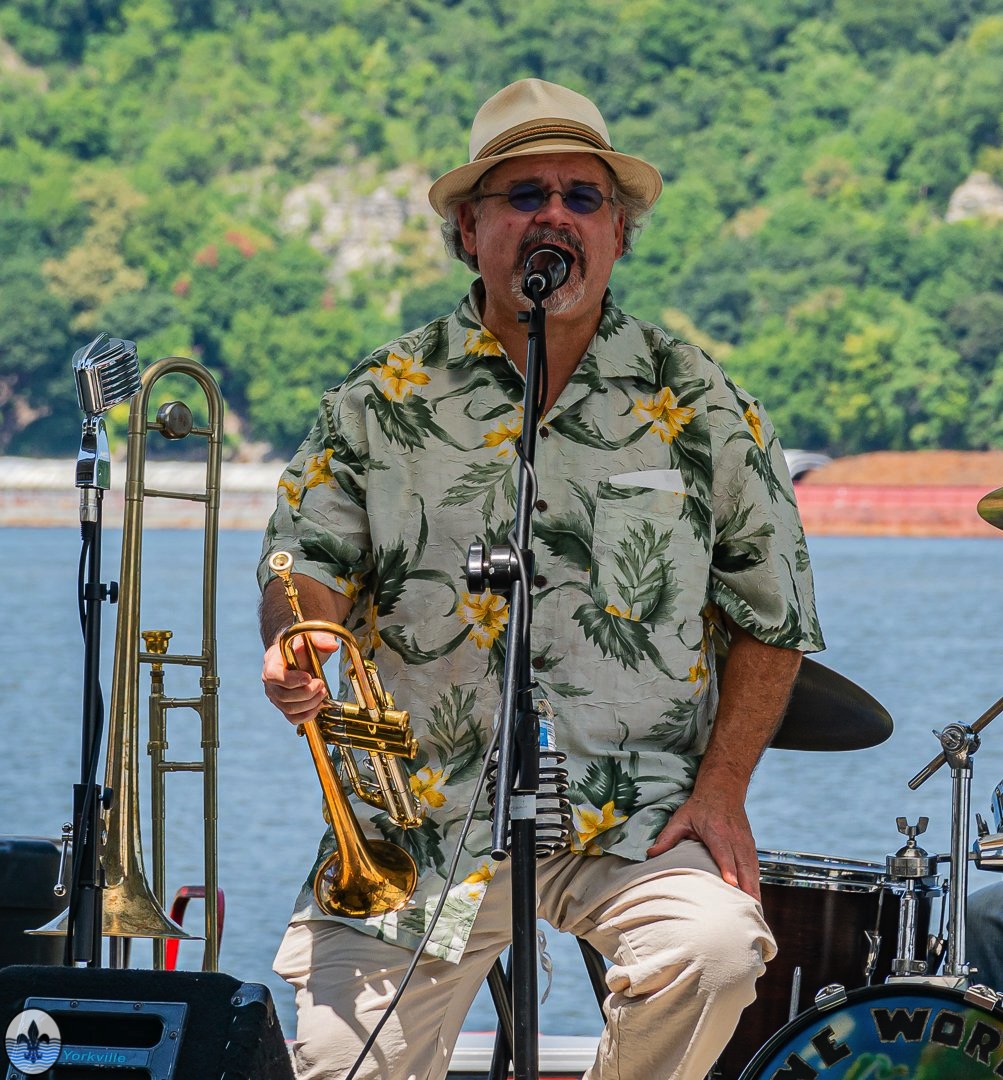 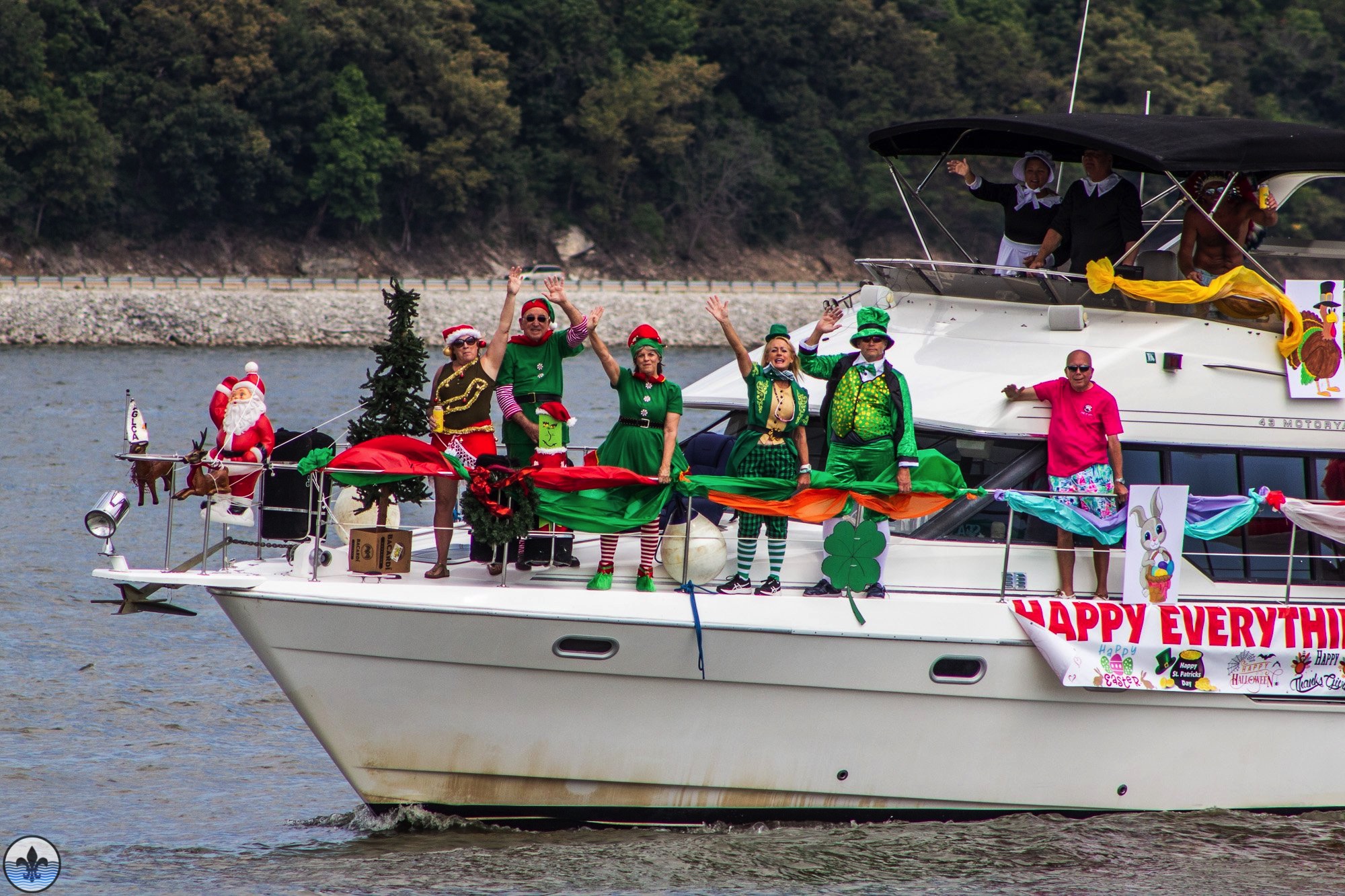 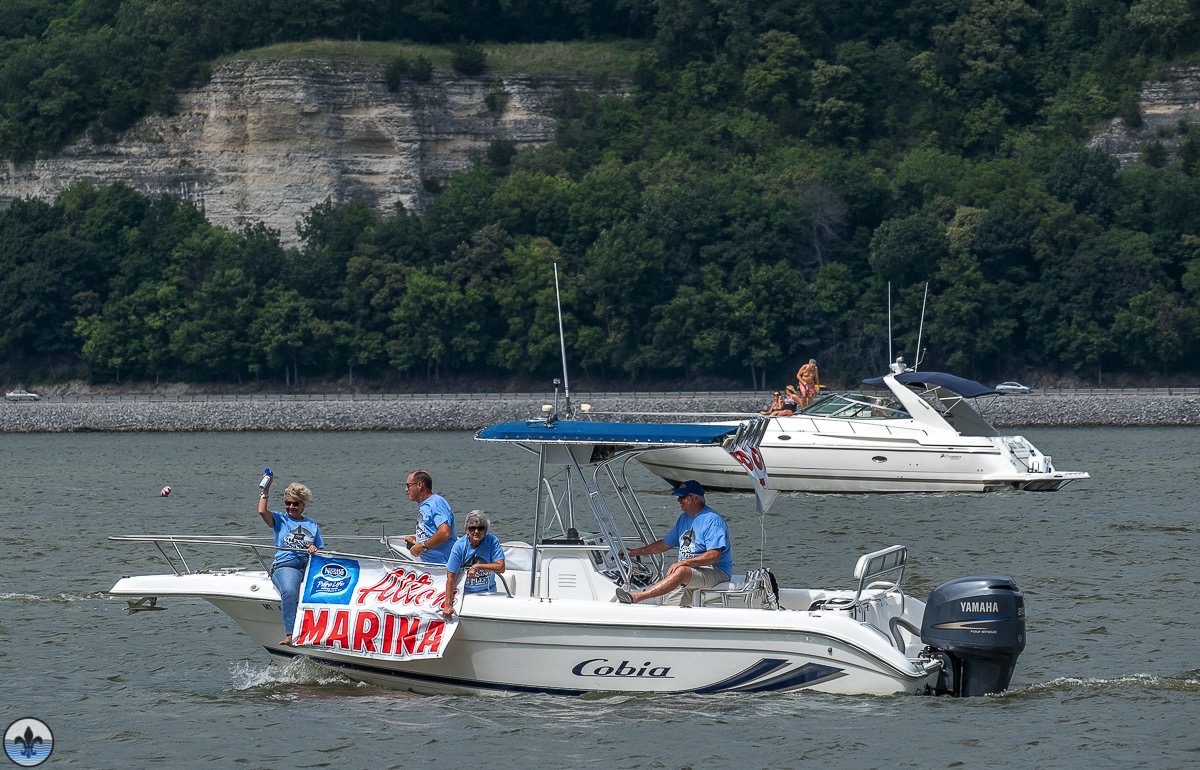 The village of Portage Des Sioux was itself founded in 1799 by Frances Saucier to be a sort of refuge settlement for earlier French settlers of Illinois who feared encroachment by Americans. Following the War of 1812 and the subsequent treaties, the village grew slowly until after the Civil War when German immigration regained some of the momentum it had set earlier in the century. The Germans in Portage Des Sioux were largely farmers and established farms and farming communities in the area, some of which still exist to this day. They were also responsible for the construction of the historic Saint Francis of Assisi Church in 1879 (the parish itself was formed by French speakers around 1800). The population would eventually peak in 1970, before settling to its current, stable number. 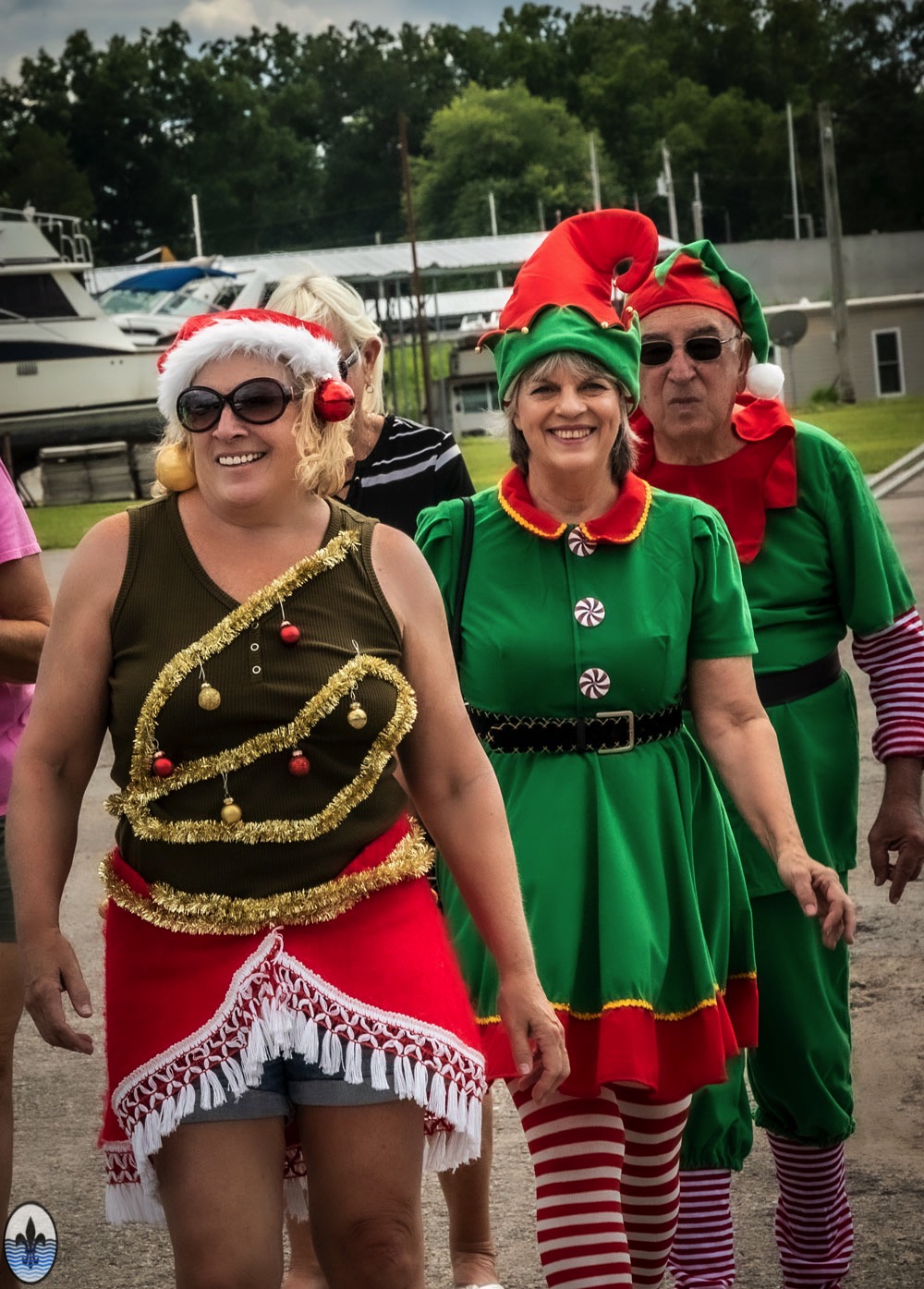 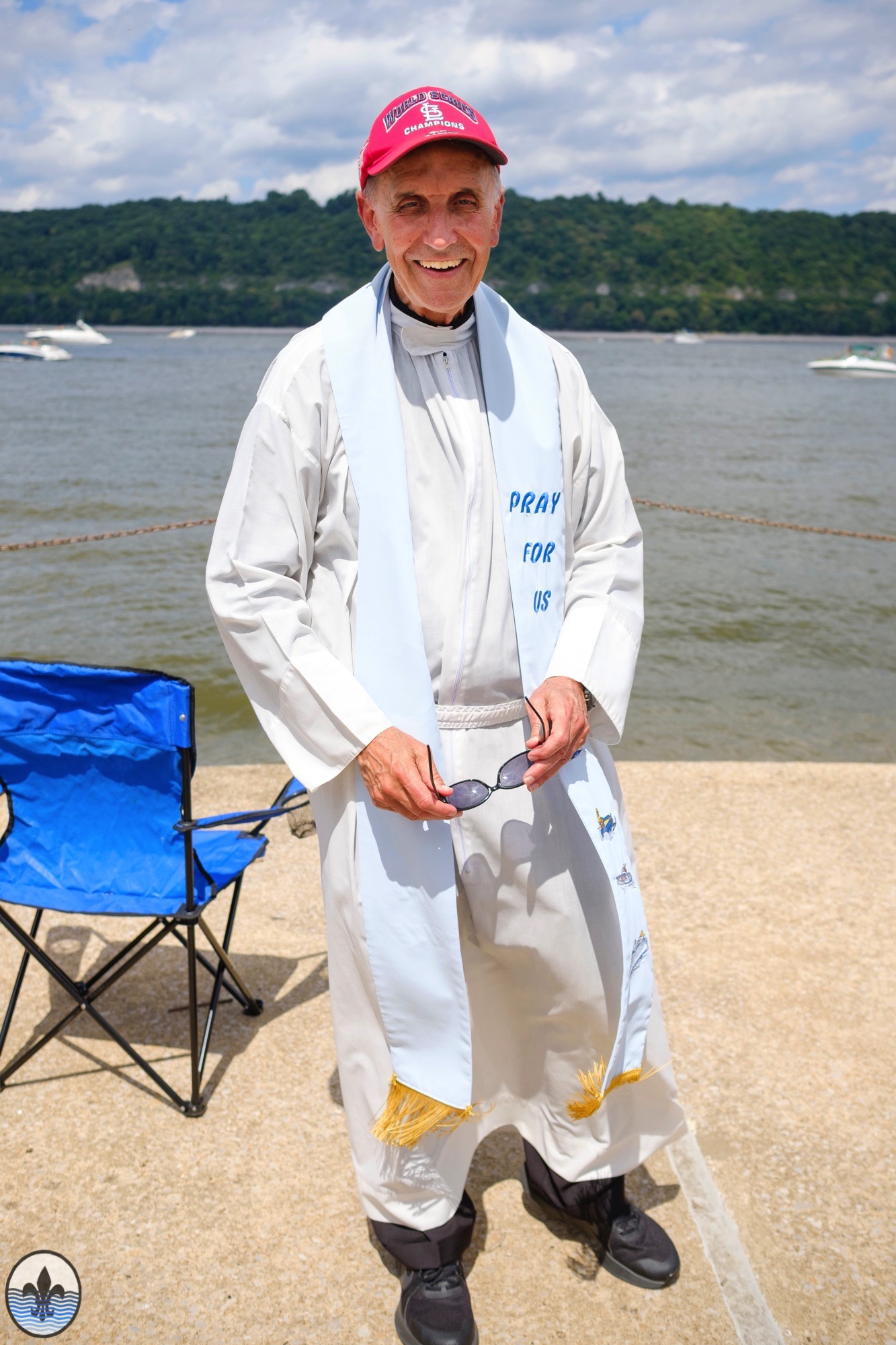 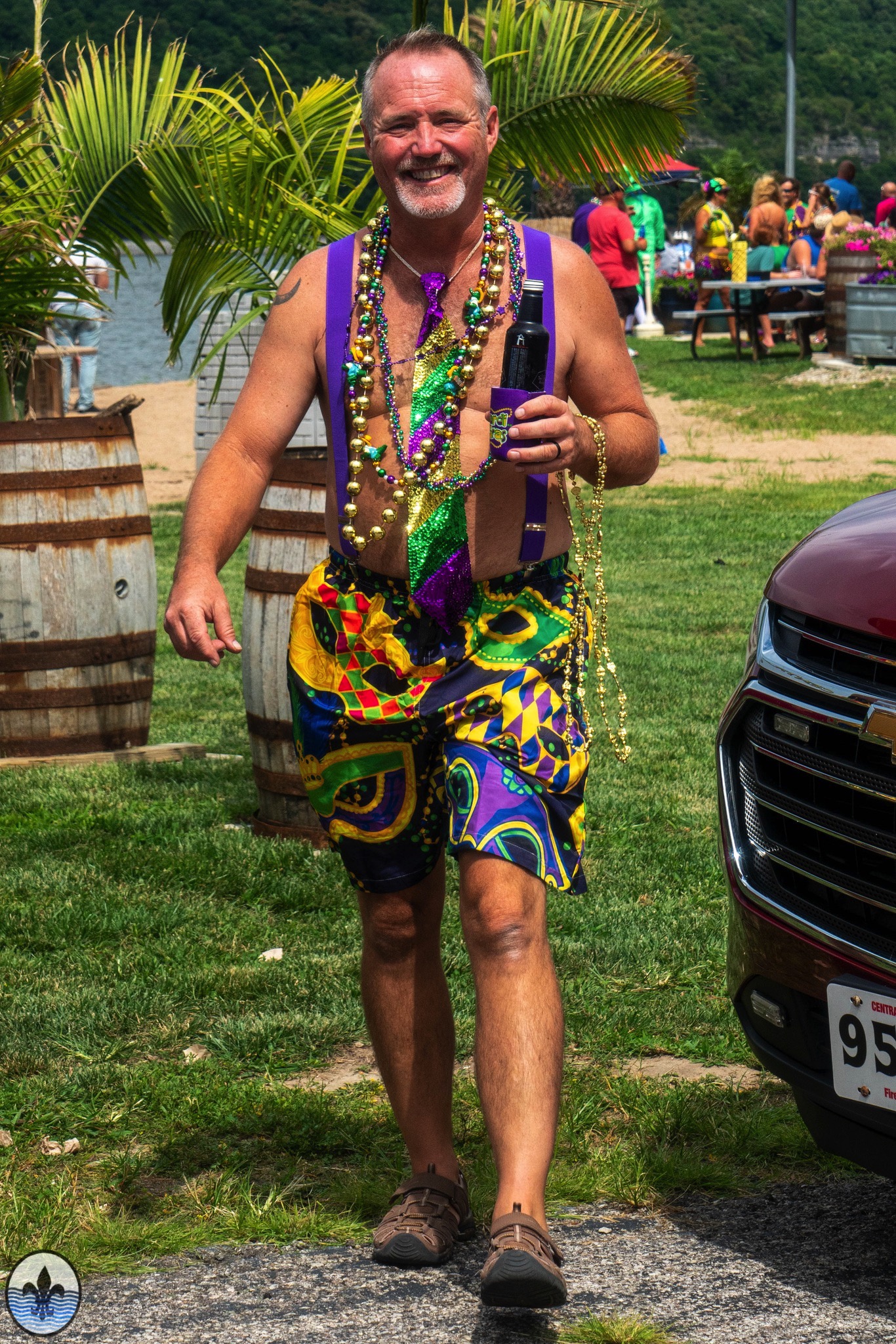 Like other river towns in the American Bottom, Portage Des Sioux is susceptible to devastating flood events, and in 1951, a flooded Missouri River threatened both the town’s lifeblood of farmland and the community itself. In the face of this, the parishioners of Saint Francis of Assisi Church took to prayer in the church for the salvation of themselves and their neighbors. The town was spared, some would say miraculously, and the Church’s then pastor felt that a tribute of thanks (and possibly something to ward against future floods) should be constructed. The statue of Our Lady of the Rivers (a reference to the three nearby rivers of Mississippi, Missouri and Illinois and their confluences) was erected to portray the Virgin Mary in prayer and contains symbols referencing specific bible verses. Dedicated in 1957, the fiberglass shrine continues to preside over the Mississippi River–seen as a gleaming, 25-foot tall, white form during the day and a yellow, neon-lit halo at night.

Almost immediately, the idea of a Blessing of the Fleet ceremony was born. More common in seafaring places, a blessing of the fleet is meant to protect boats and their passengers from harm while upon the waters. In Portage Des Sioux, the annual Blessing of the Fleet Festival features a parade of boaters in vessels adorned with the chosen Festival theme passing by the statue of Our Lady of the Rivers while a pastor blesses each. Afterward, the event extends to the nearby town harbor for a jubilant celebration, where awards for the best boat decorations are announced. 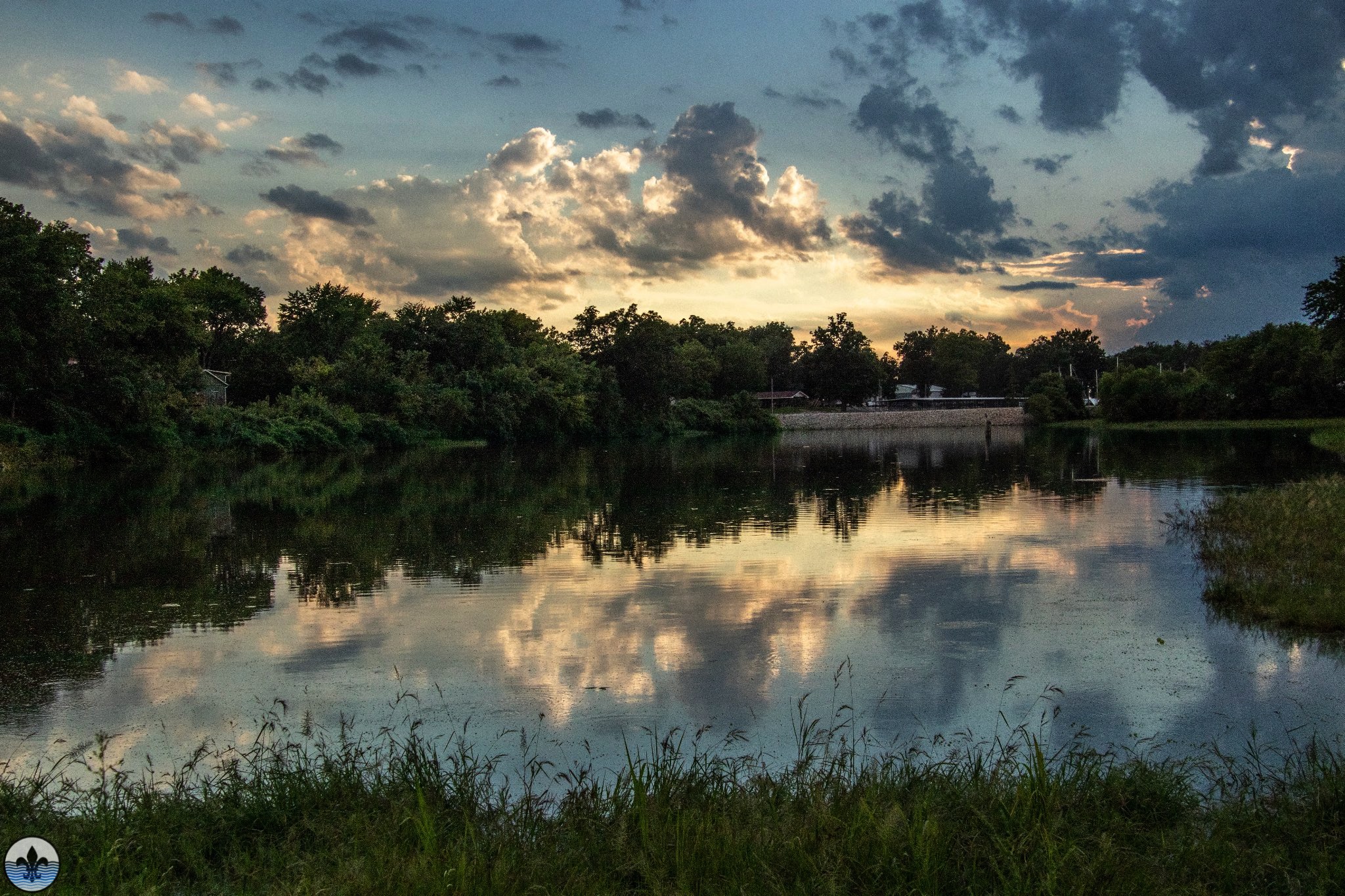 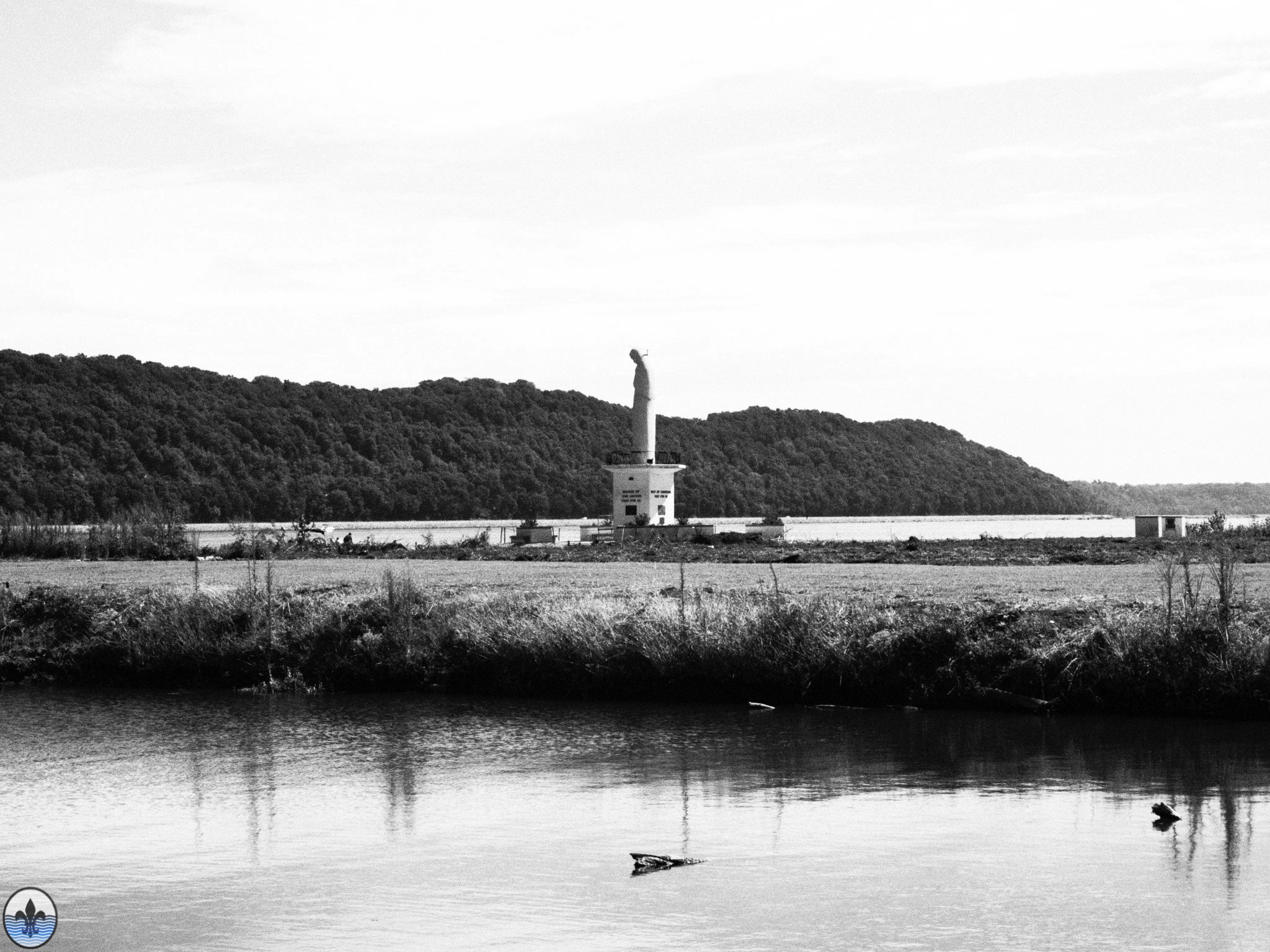 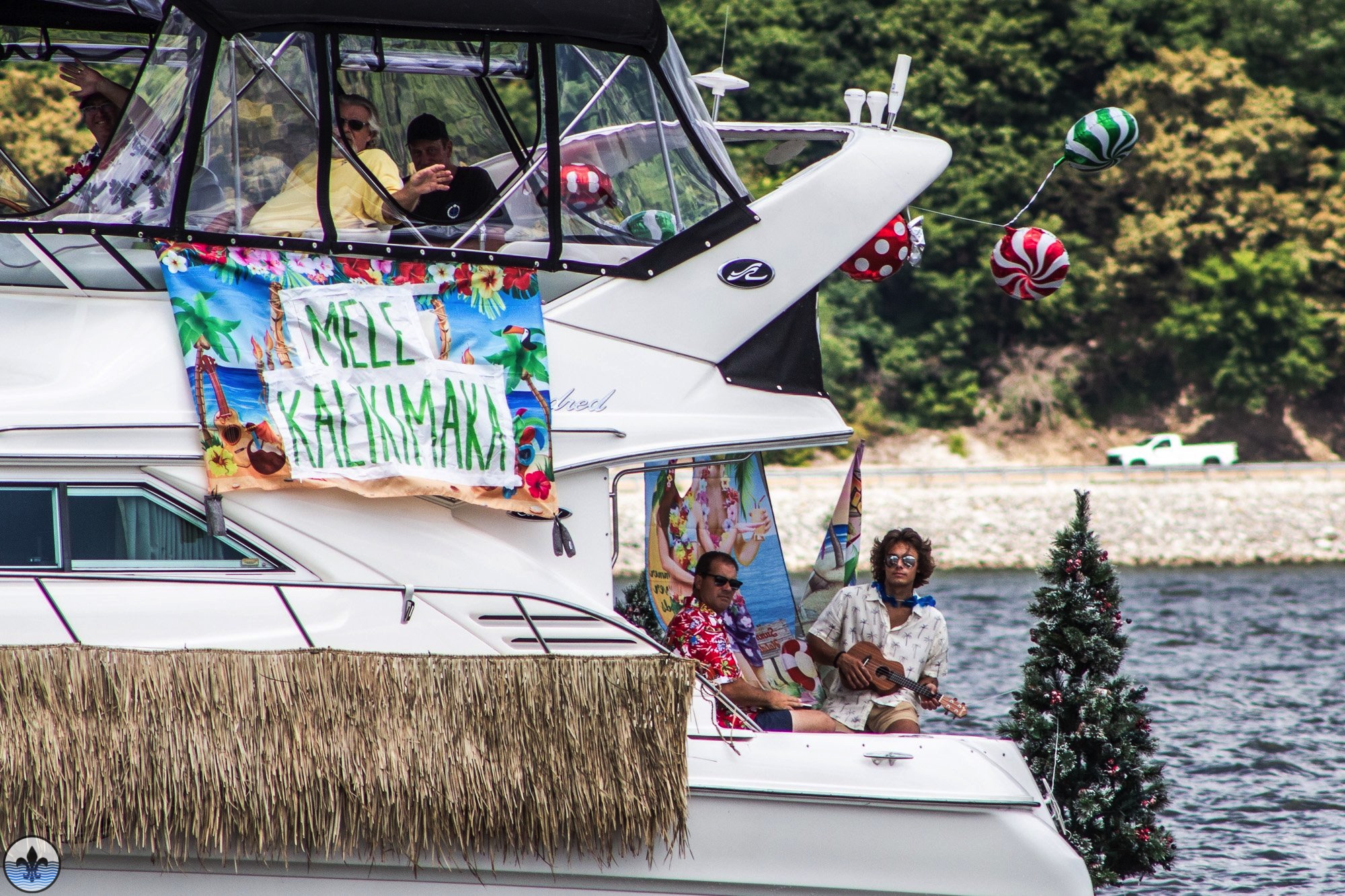 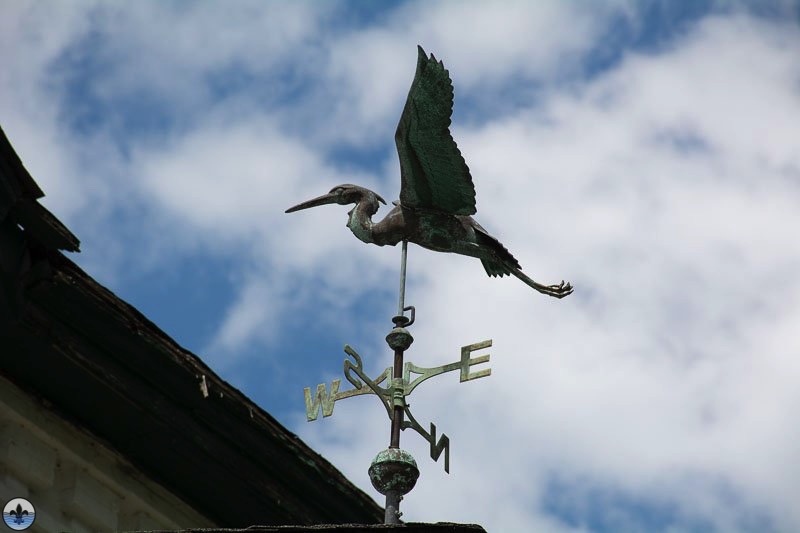 Today, Portage Des Sioux is (for most of the year) a quiet, farming community along a beautifully scenic section of the Mississippi River. It has the easy going vibe of a town tucked away in an area too remote for most city dwellers to visit. Yet, for one special day every year, this place becomes a nexus for boaters from miles away, and for good reason. After all, who wouldn’t take the chance to benefit from whatever special luck or divine intervention saved the town’s residents from certain doom all those years ago? 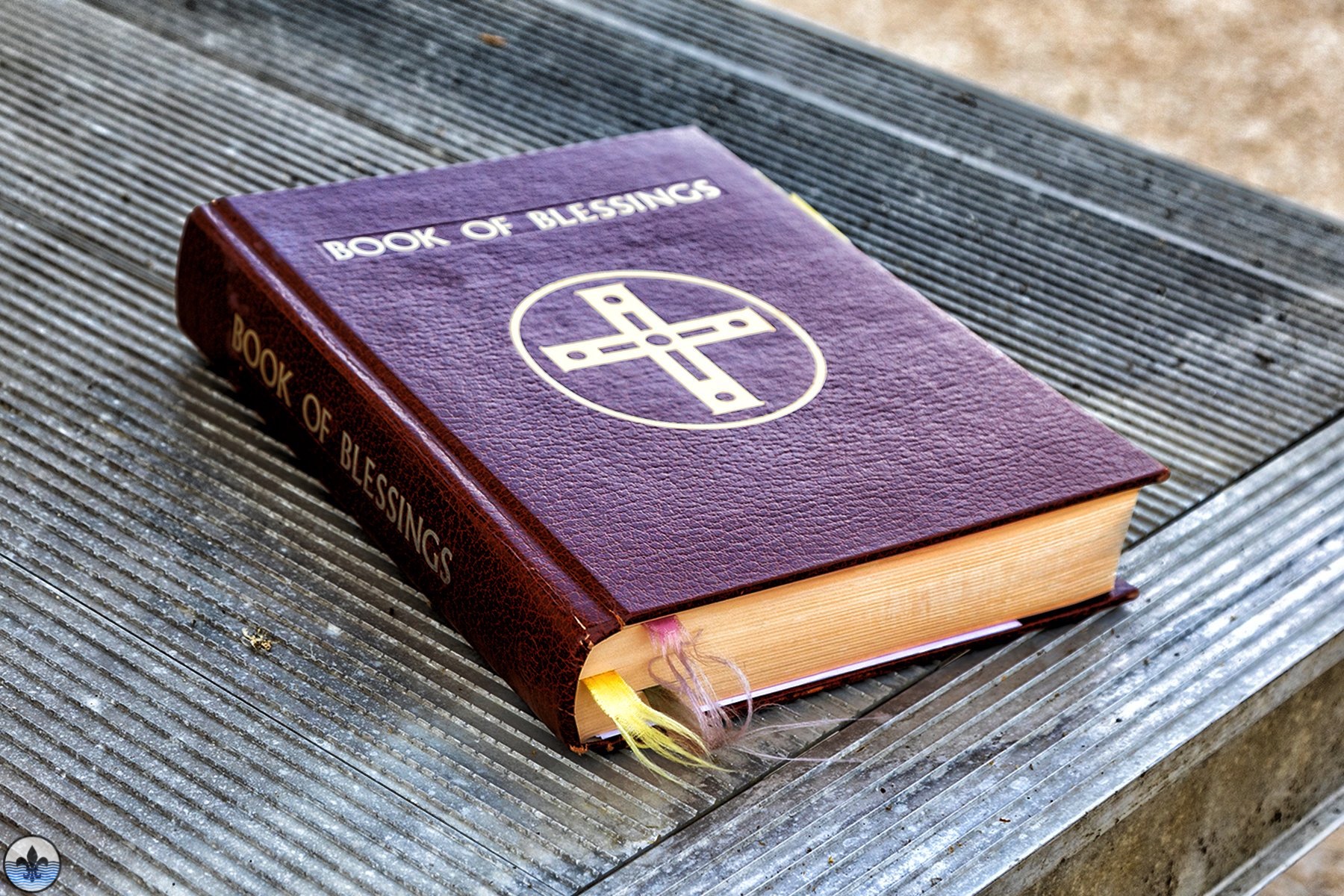 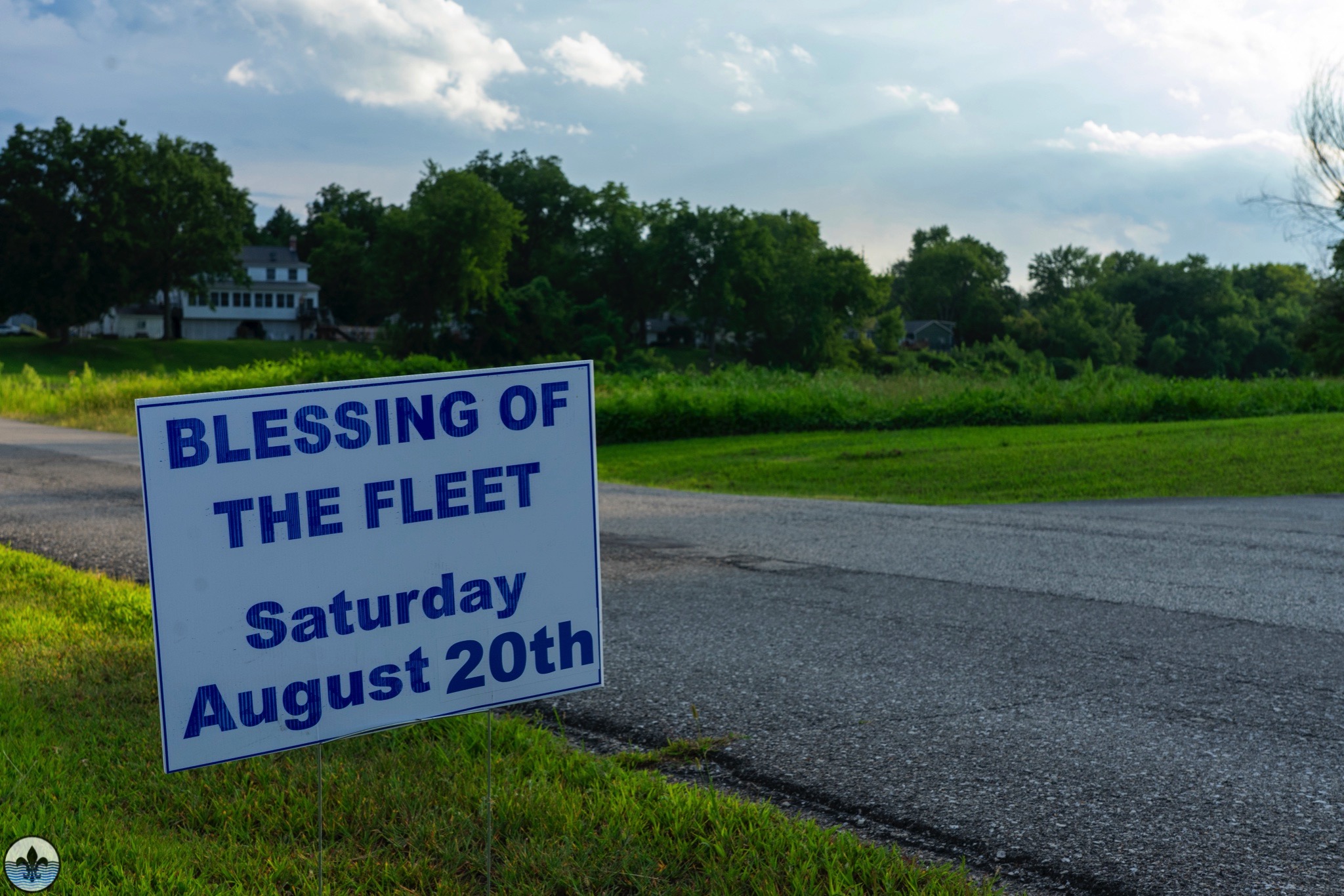 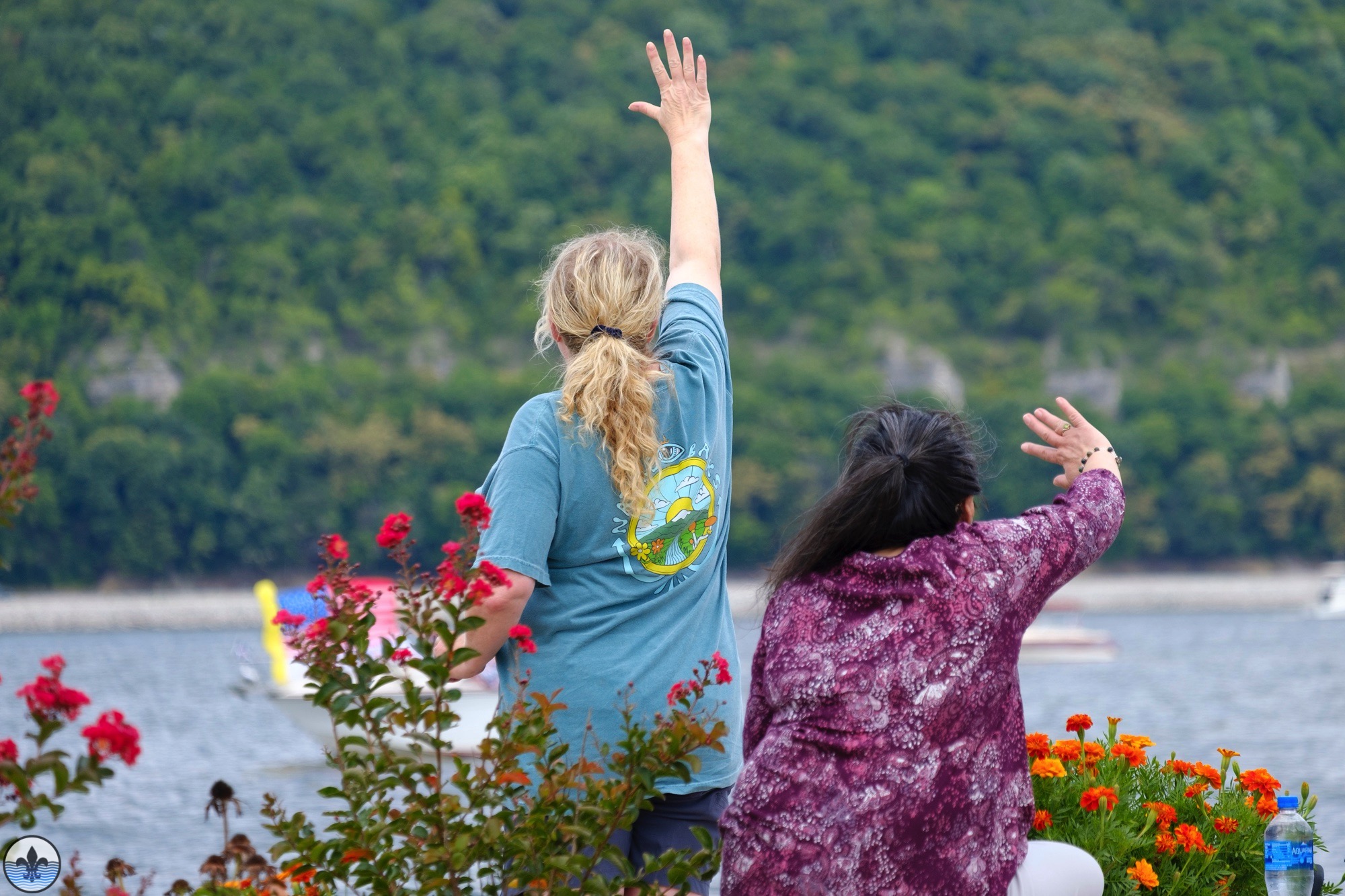 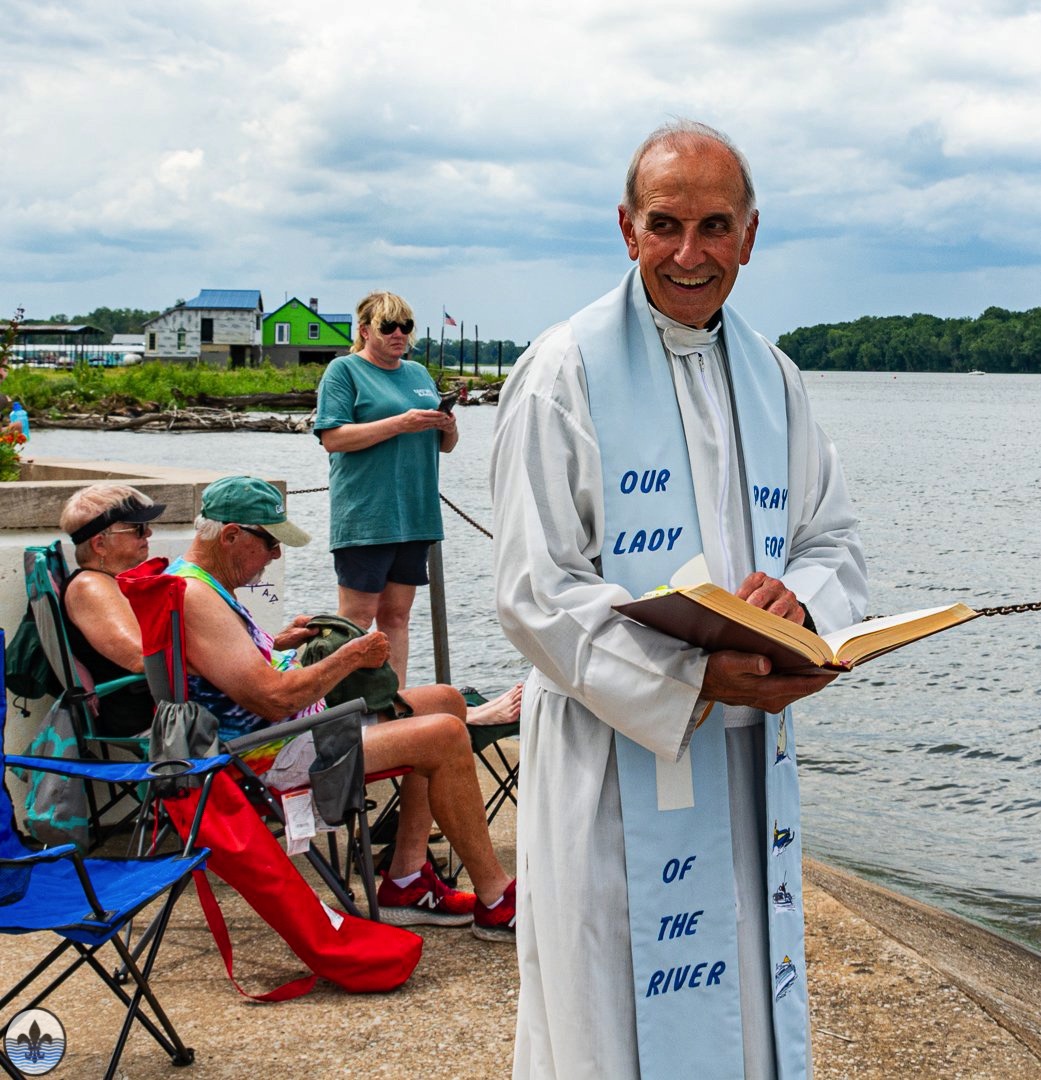