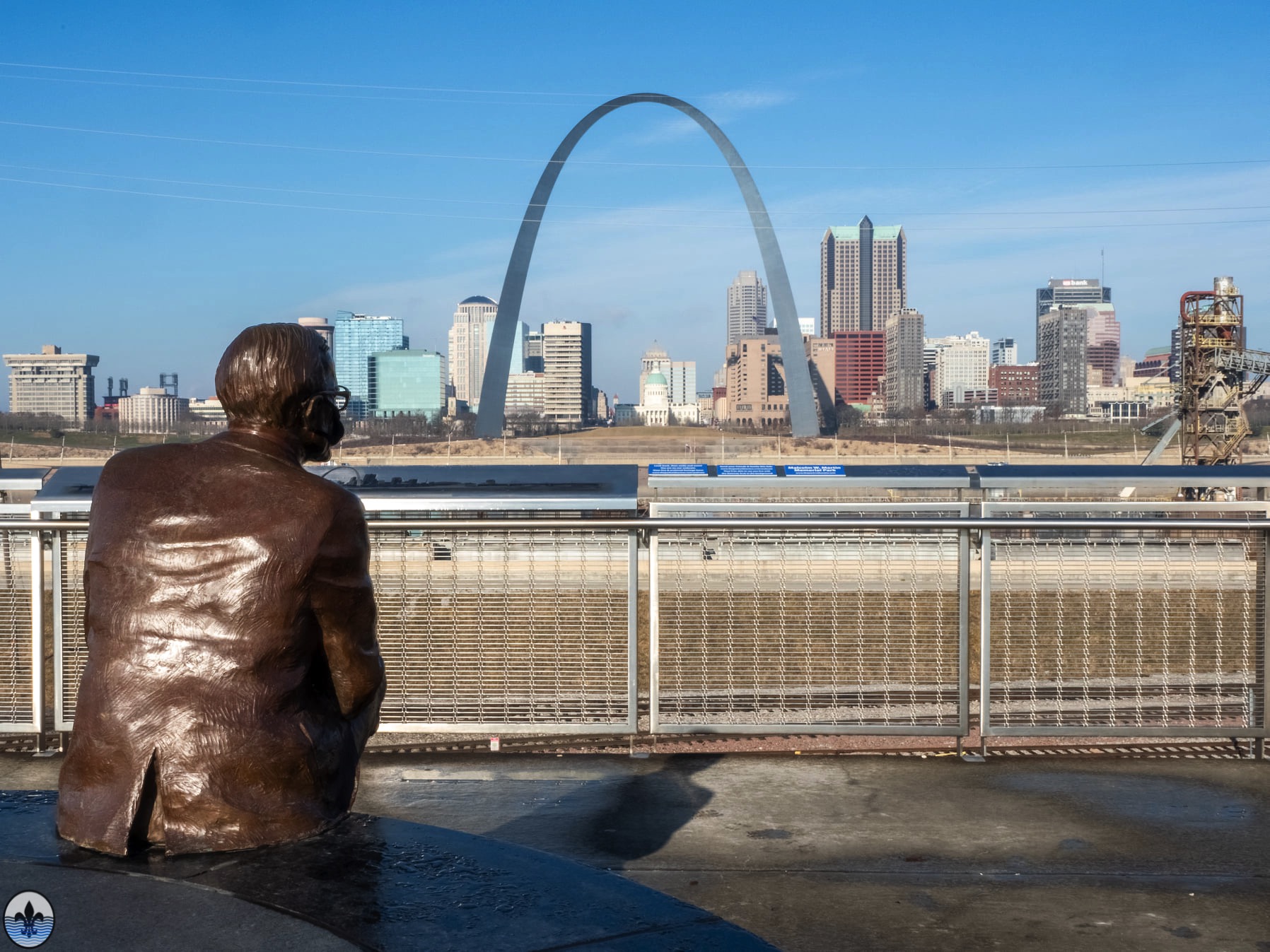 After its namesake, East St. Louis is perhaps the most nationally recognized community in the St. Louis region, and like St. Louis, not always for the best reasons. Though those accounts rarely reveal a full portrait. East St. Louis is a small, midwestern city that has been through a lot: from quaint river town heritage, to becoming the third largest city in Illinois, to an era of seeming to lose it all, to its possible (if not promised) rebirth. Read on to see what all this surprising city has to offer. 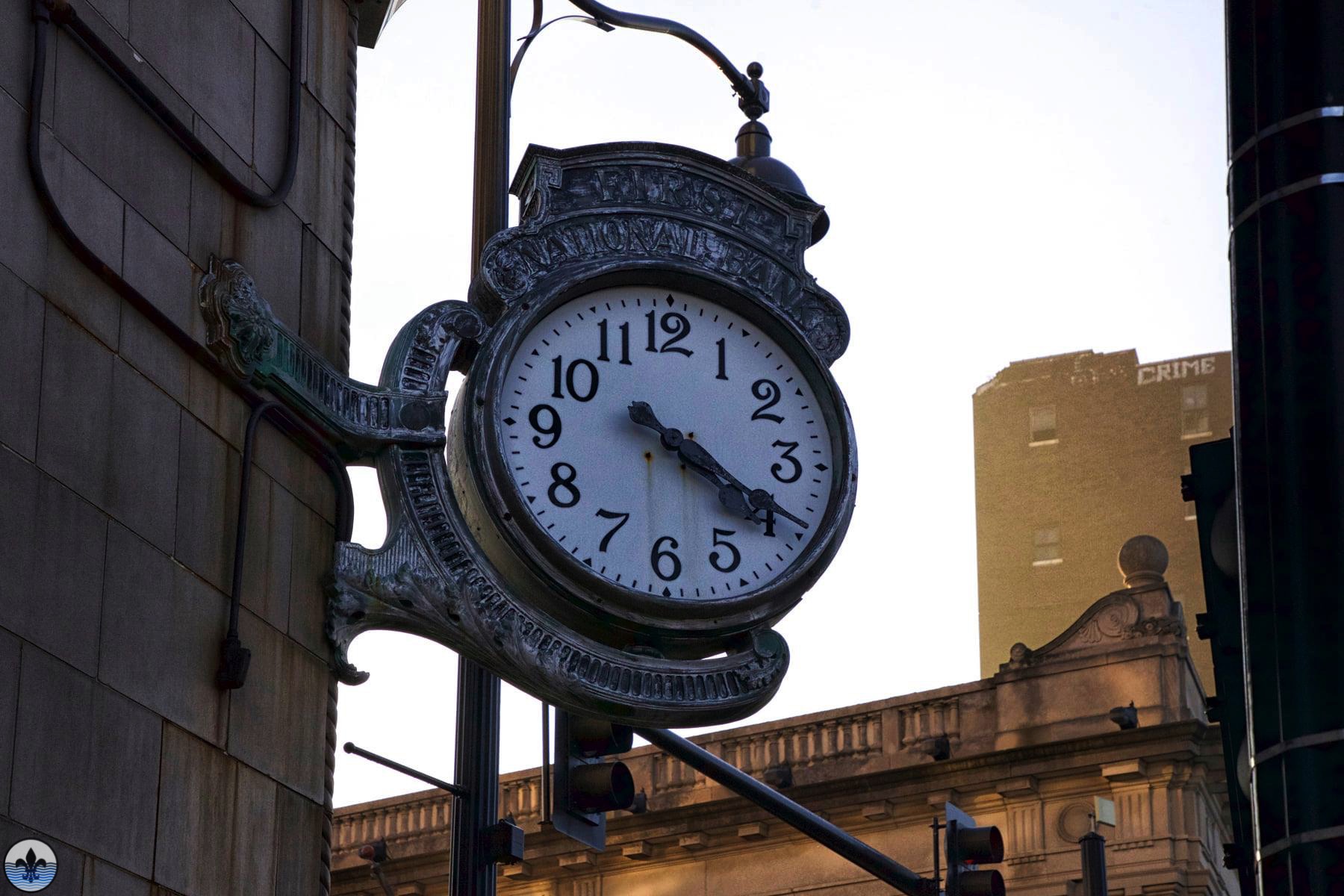 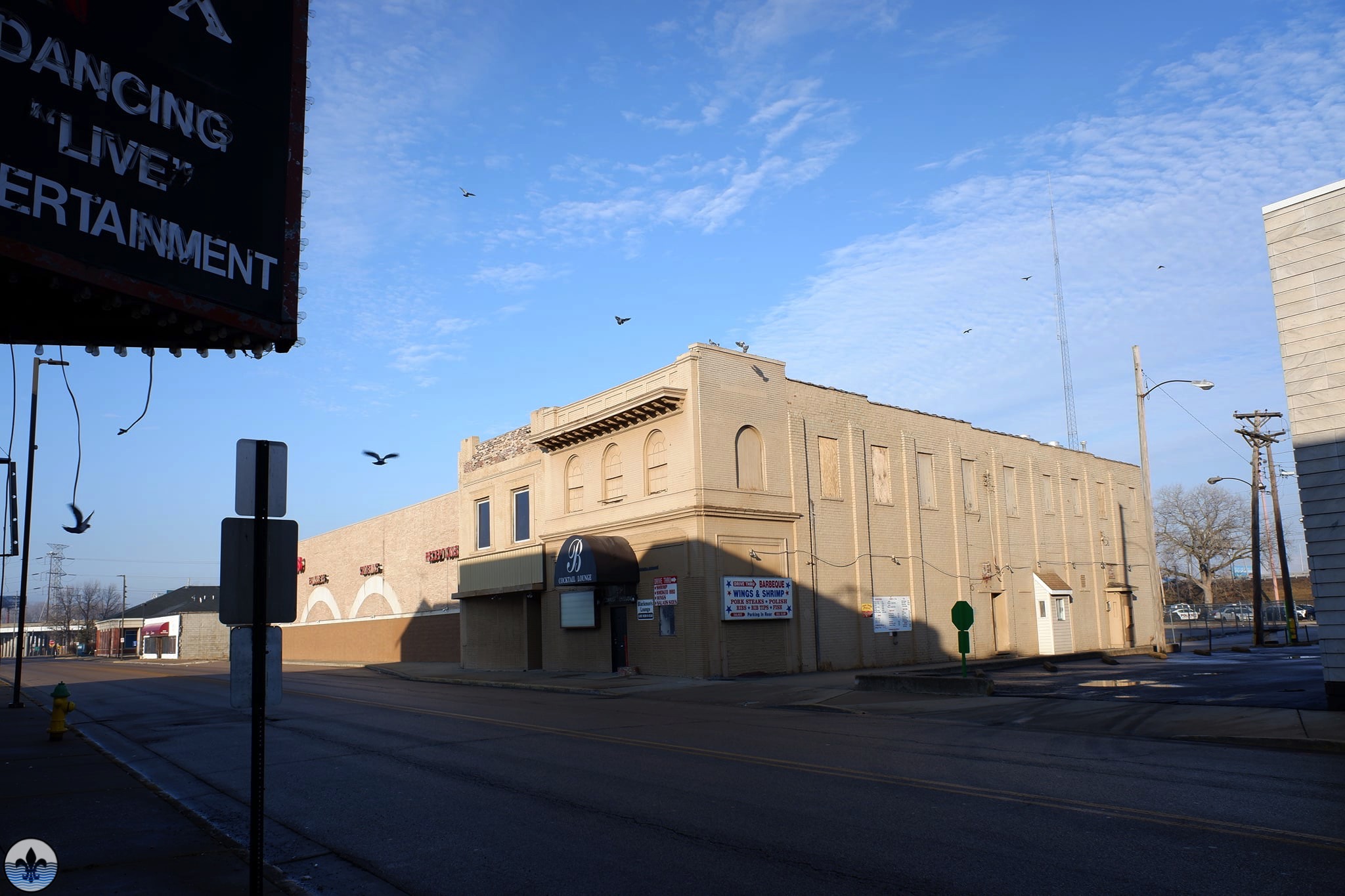 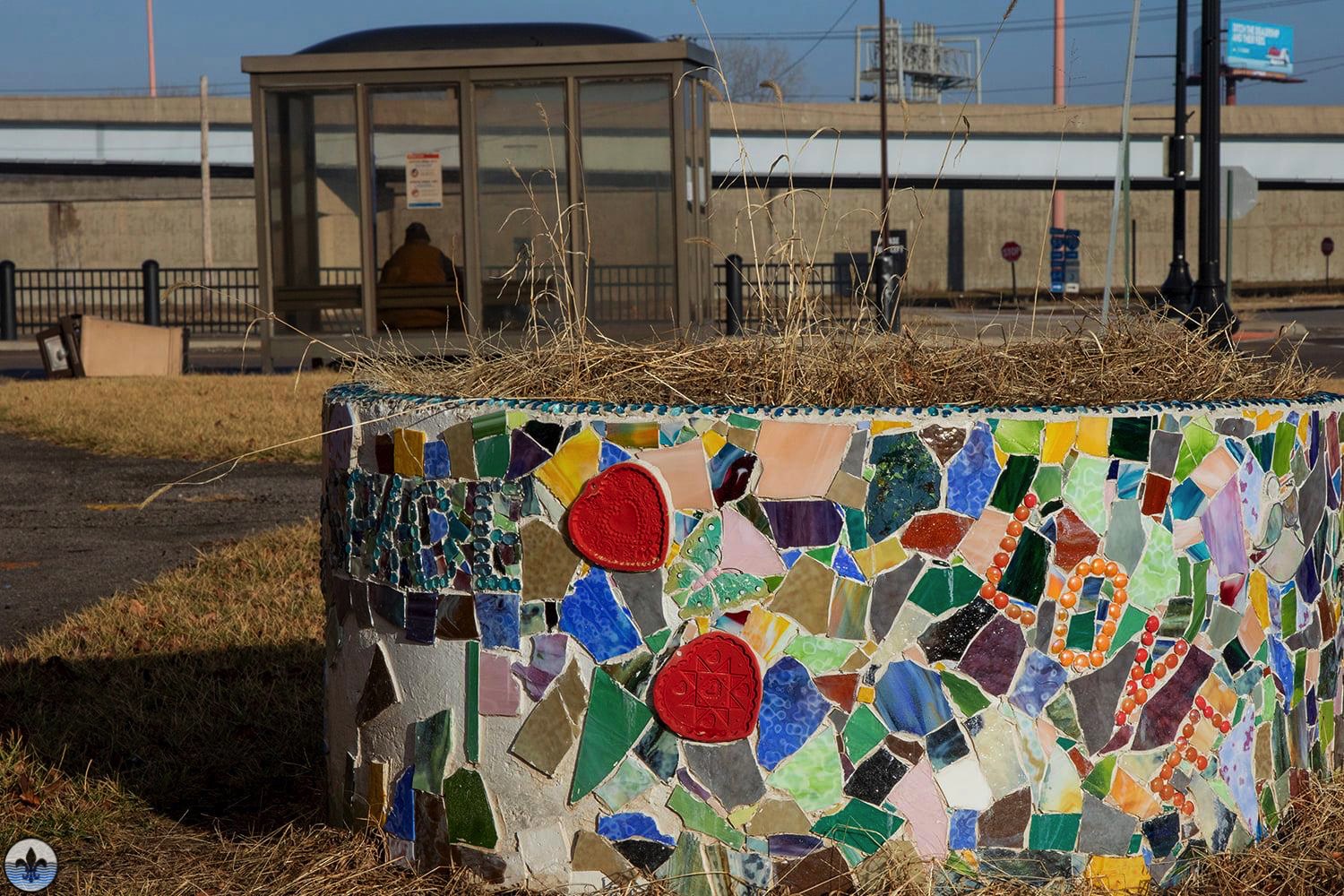 Though St. Louis’ French founding came from the south, via New Orleans, much of the city’s early French settlers came from the east. This is because nearly 100 years prior to St. Louis’ origin, the French formed the first permanent White settlement in Illinois in 1699 at Cahokia. A trading post (and later military fort), Cahokia, along with nearby Kaskaskia, was an important gateway for goods, services, and people passing through the region of the time. In 1783, under the Treaty of Paris, all of Illinois became ceded to the United States as part of the Northwest Territory. About this same time, British (who had seized control of the Northwest Territory from the French in 1750) and Americans (commonly referred to at the time as “Virginians” because of the local involvement of the Virginia Militia against the British) began to move into the area, often supplanting the earlier French pioneers who resettled across the river in St. Louis, away from U.S. or British intervention.

Among those actual Virginians was James Piggot, who arrived with George Rogers Clark as part of the Illinois Campaign of 1778-1779. Piggot remained in the area after the skirmish, and established a ferry operation to ford the Mississippi River from modern day East St. Louis. Before Piggot’s death in 1799, his ferry operation had attracted enough business that others began to settle in the area to either work the ferry or cater to its workers. This community became the village of Illinoistown, but its growth was stymied by repeated flooding. 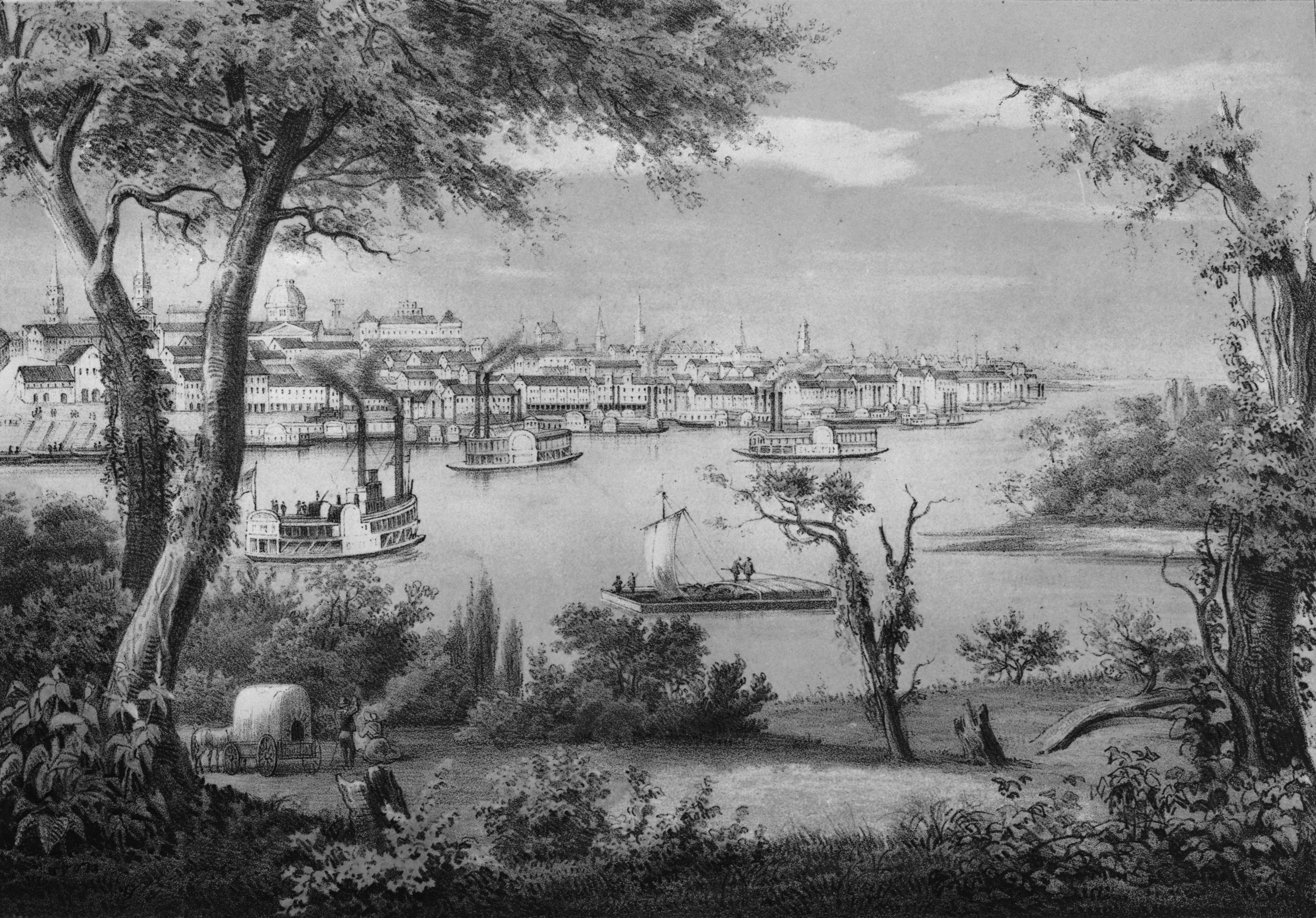 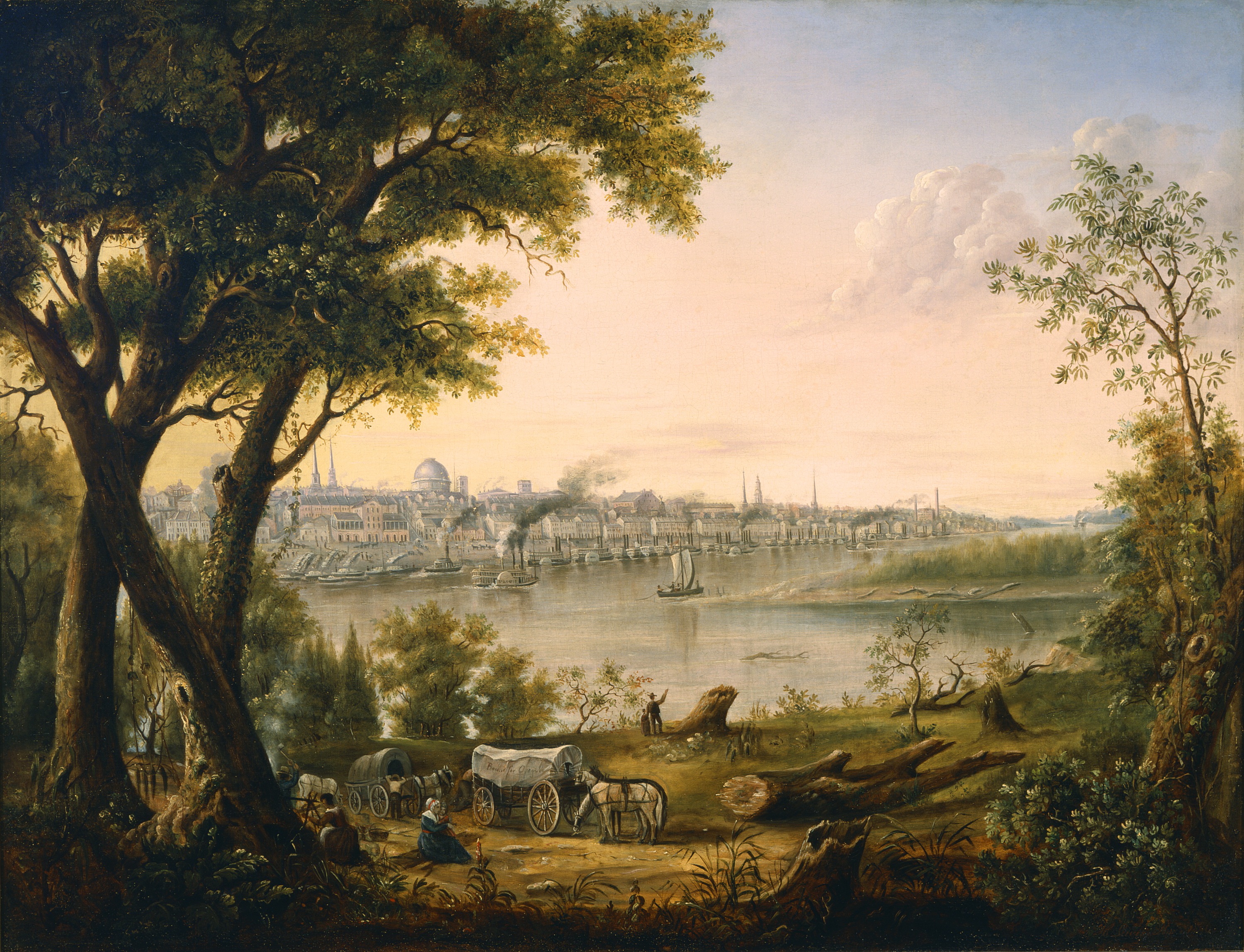 In the two artworks above from the collection of the Saint Louis Art Museum, you can observe a topographical feature missing from the contemporary landscape that you may be familiar with. On the middle-right of the picture, a sliver of land juts out, which is the remainder of what was known as “Bloody Island” (named for its popularity as a place for deadly duels). Today, the island is a part of the Illinois side of the river, but in the 1830’s, the presence of this island signaled the transition of river traffic away from the vast levee at St. Louis to that of Illinoistown. Over time, sediment in the river had begun to divert the main channel away from St. Louis toward the east side of Bloody Island. In 1836, St. Louis was successful in soliciting federal aid to ensure that its hugely profitable businesses owing to river traffic would remain intact, and Robert E. Lee (the future general of the confederacy in the Civil War) was commissioned to solve the problem, which he did by constructing dykes to redirect the flow of the river.

In 1844, a more significant river event changed the fate of Illinoistown. A flood of significance nearly erased the community from existence, but after a decade of rebuilding, it emerged again with a new name and new purpose. The town was formally renamed as “East St. Louis” in 1861, and whereas the old version had equated to little more than a sleepy river hamlet, the new community would grow to regional, if not national, prominence. 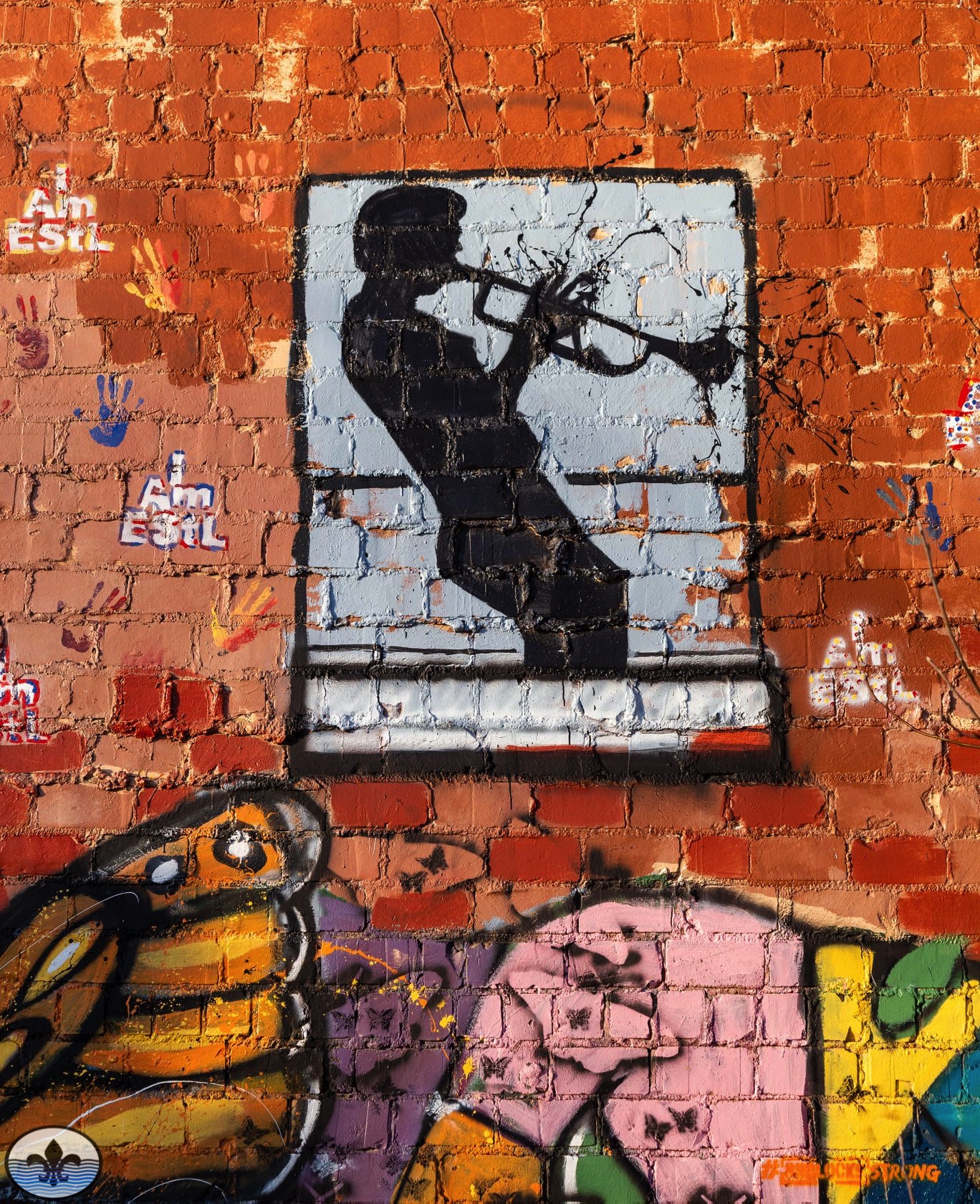 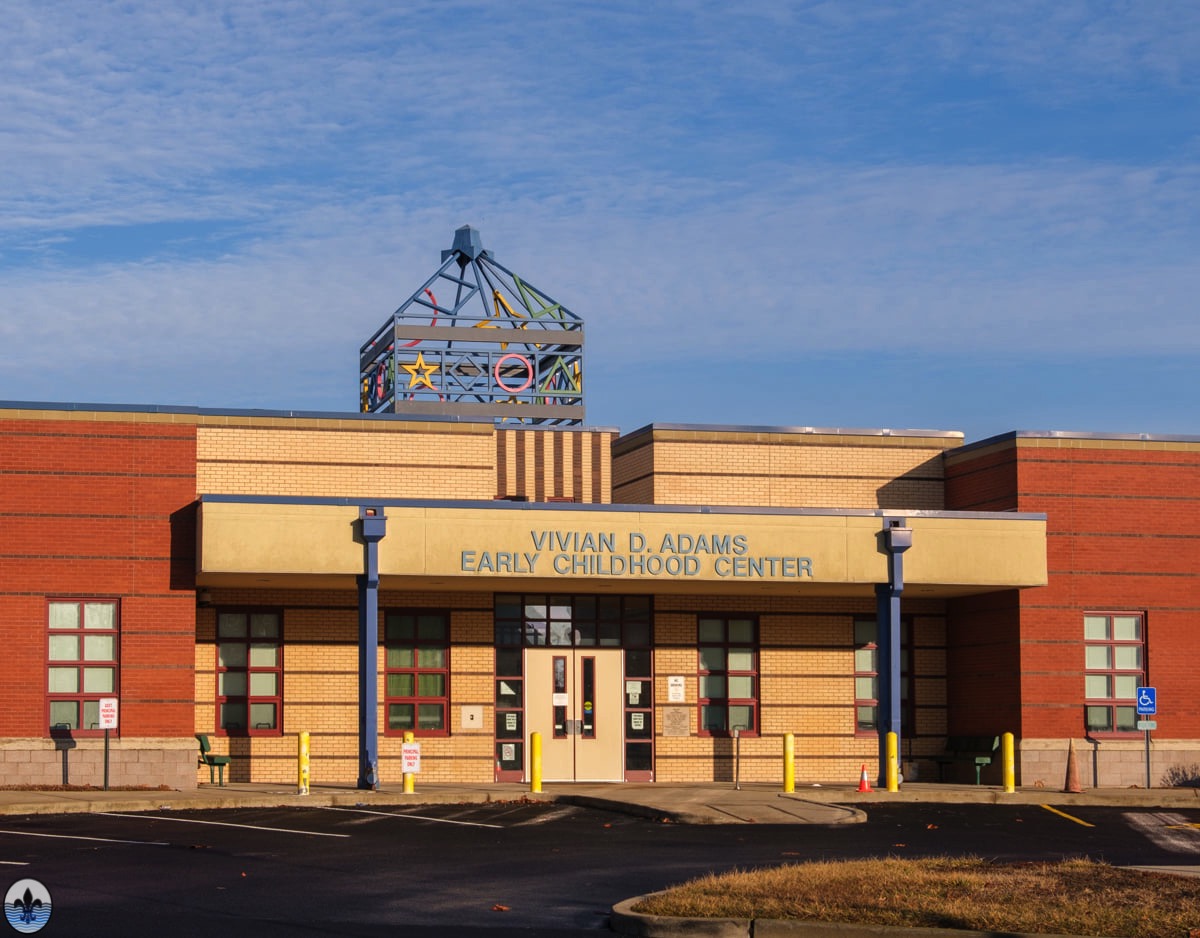 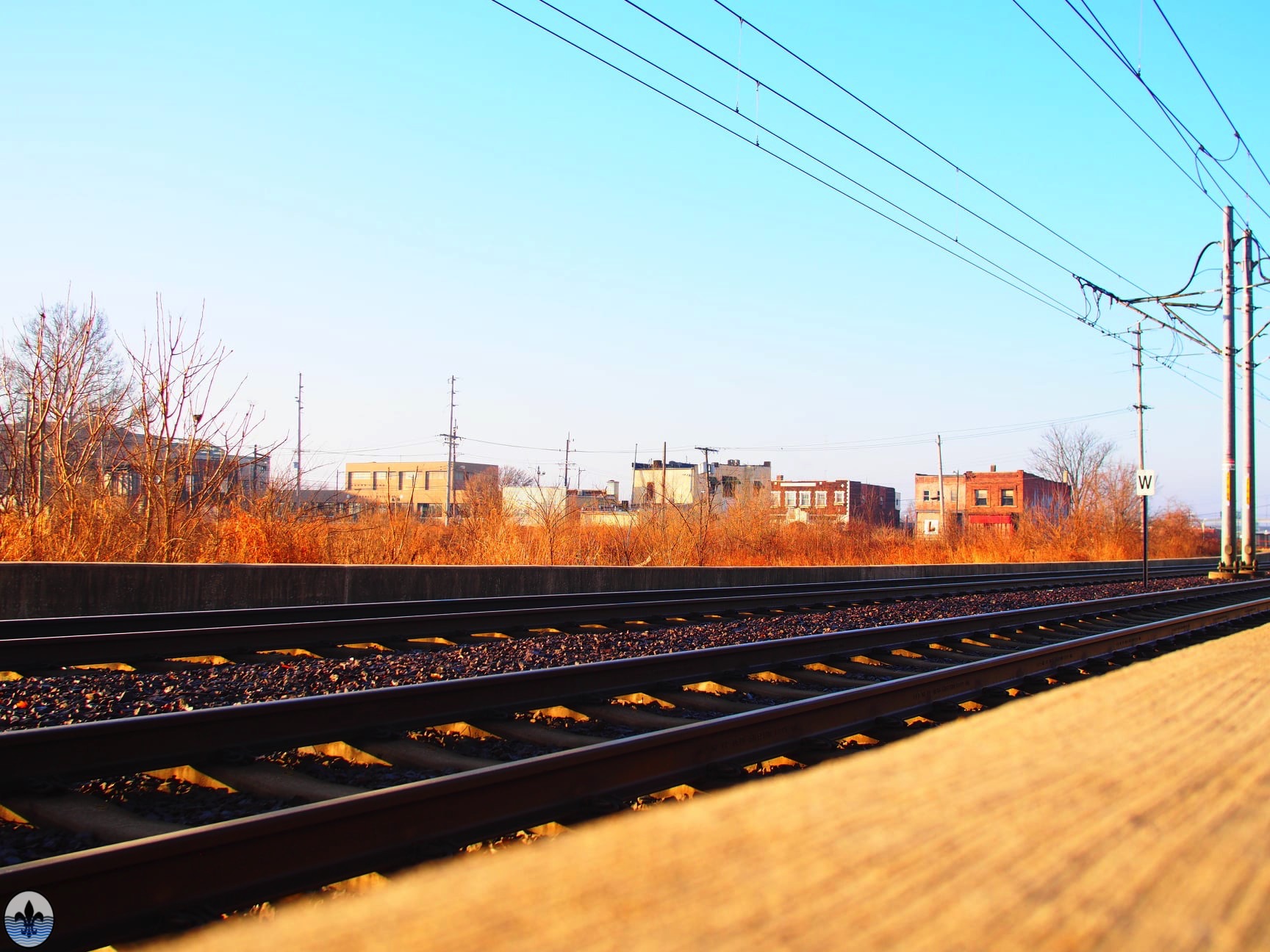 In 1849, Senator Thomas Hart Benton announced to spectators in St. Louis his intention for the city to be central in the construction of a transcontinental railroad. Almost immediately, St. Louis interests set about construction of the railroad west from the city, trusting New York City robber barons, like Jay Gould, to connect it with the east coast (a plan that would eventually backfire and supplant Chicago over St. Louis). Nonetheless, by the mid-1860’s, East St. Louis was terminus to at least five railroads, and becoming increasingly significant regionally as a transportation center. In fact, so significant were the city’s rail prospects of the time that negotiations for the Great Railroad Strike of 1877, for the entire St. Louis area, were held in East St. Louis.

The success of shipping in East St. Louis led to a period of industrial expansion that extended until The Great Depression. During this era, the city attracted businesses like the National Stockyards, Monsanto Chemical Company, Central Brewery, Aluminum Ore Company, and more. Huge amounts of coal from nearby mines was processed and shipped through East St. Louis. By 1930, nearly 200 industries were located in the city, whose population had risen 1500% since its name change, but not all was peaceful amid such substantial progress and growth. 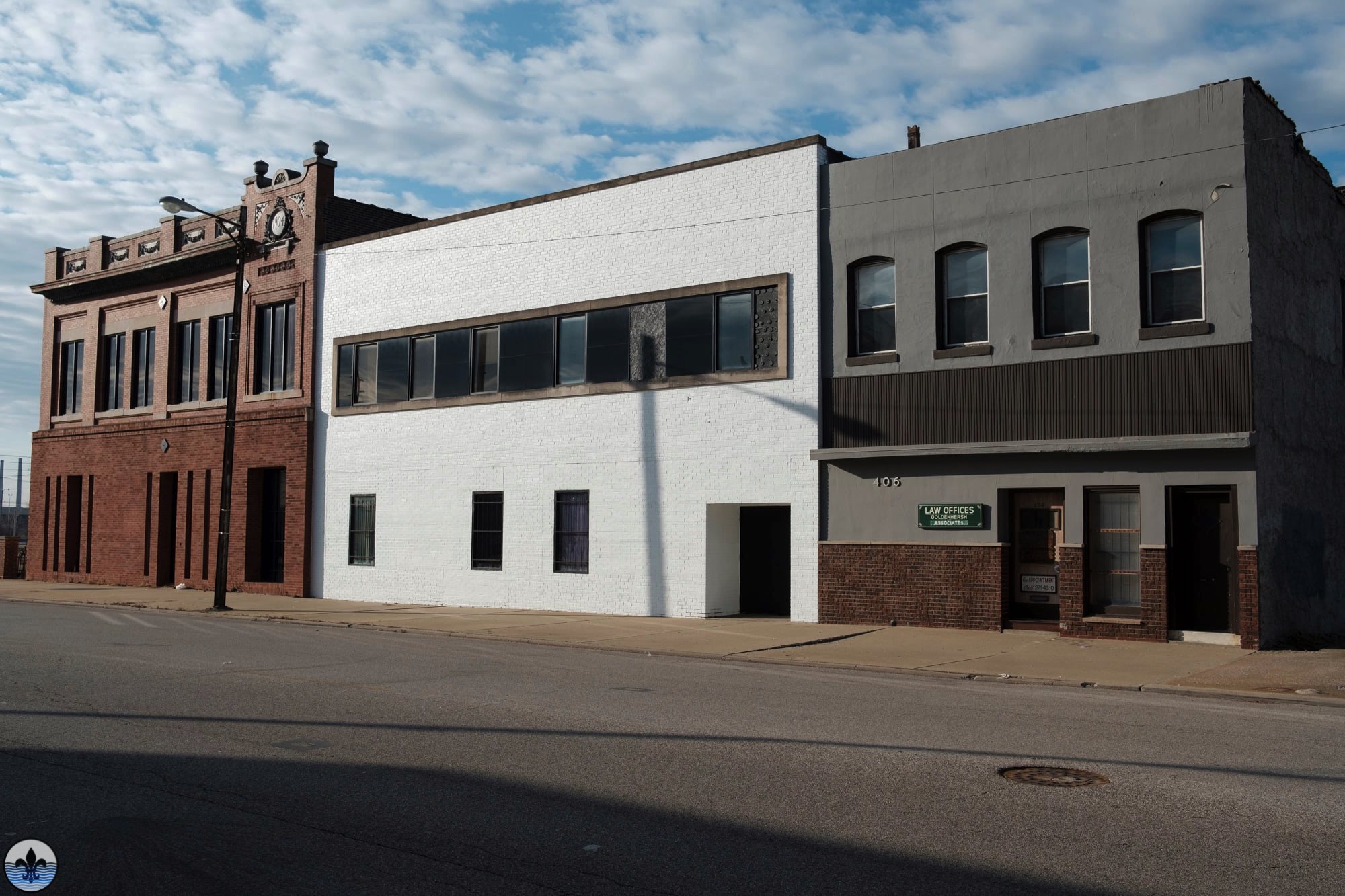 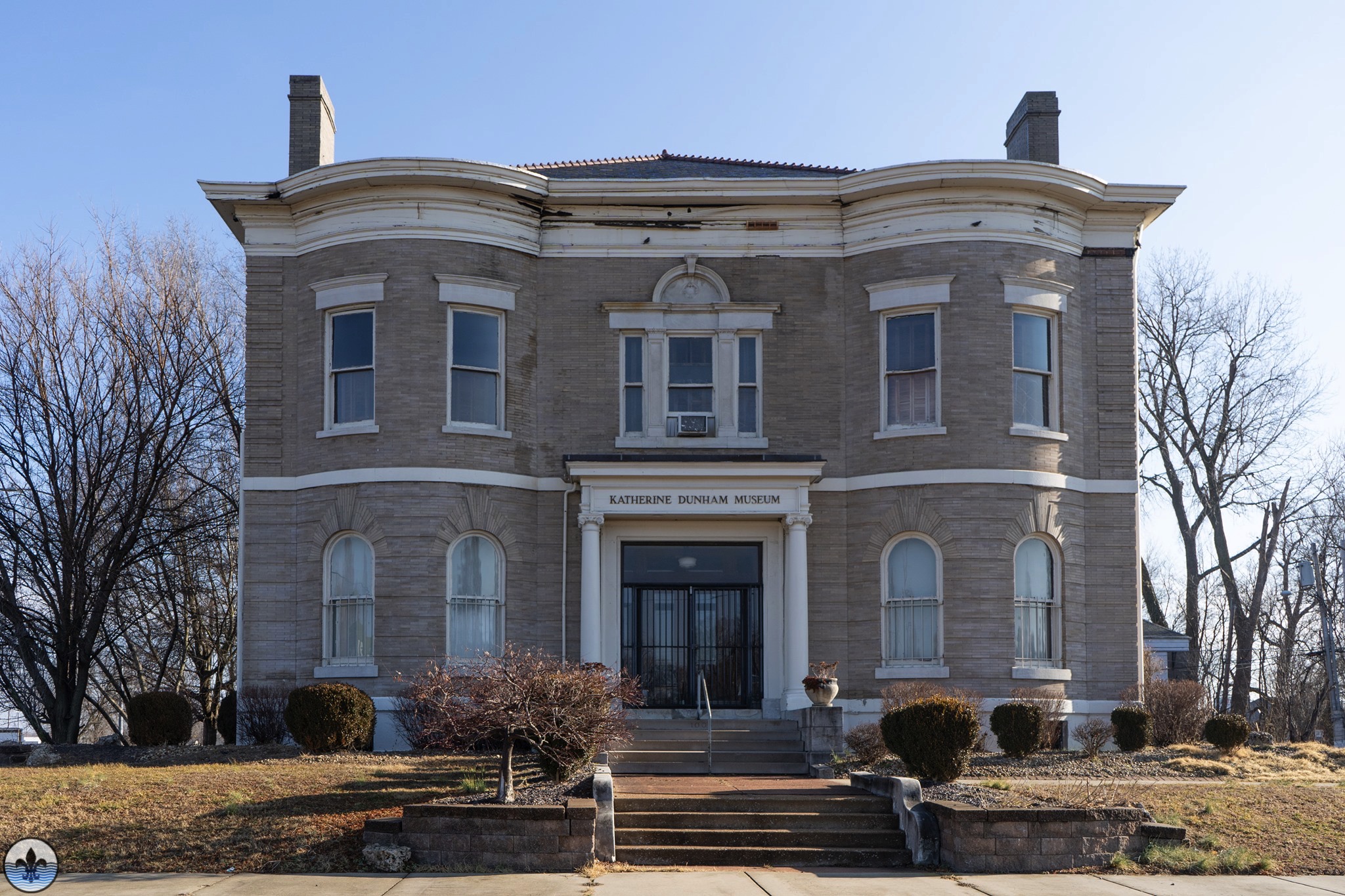 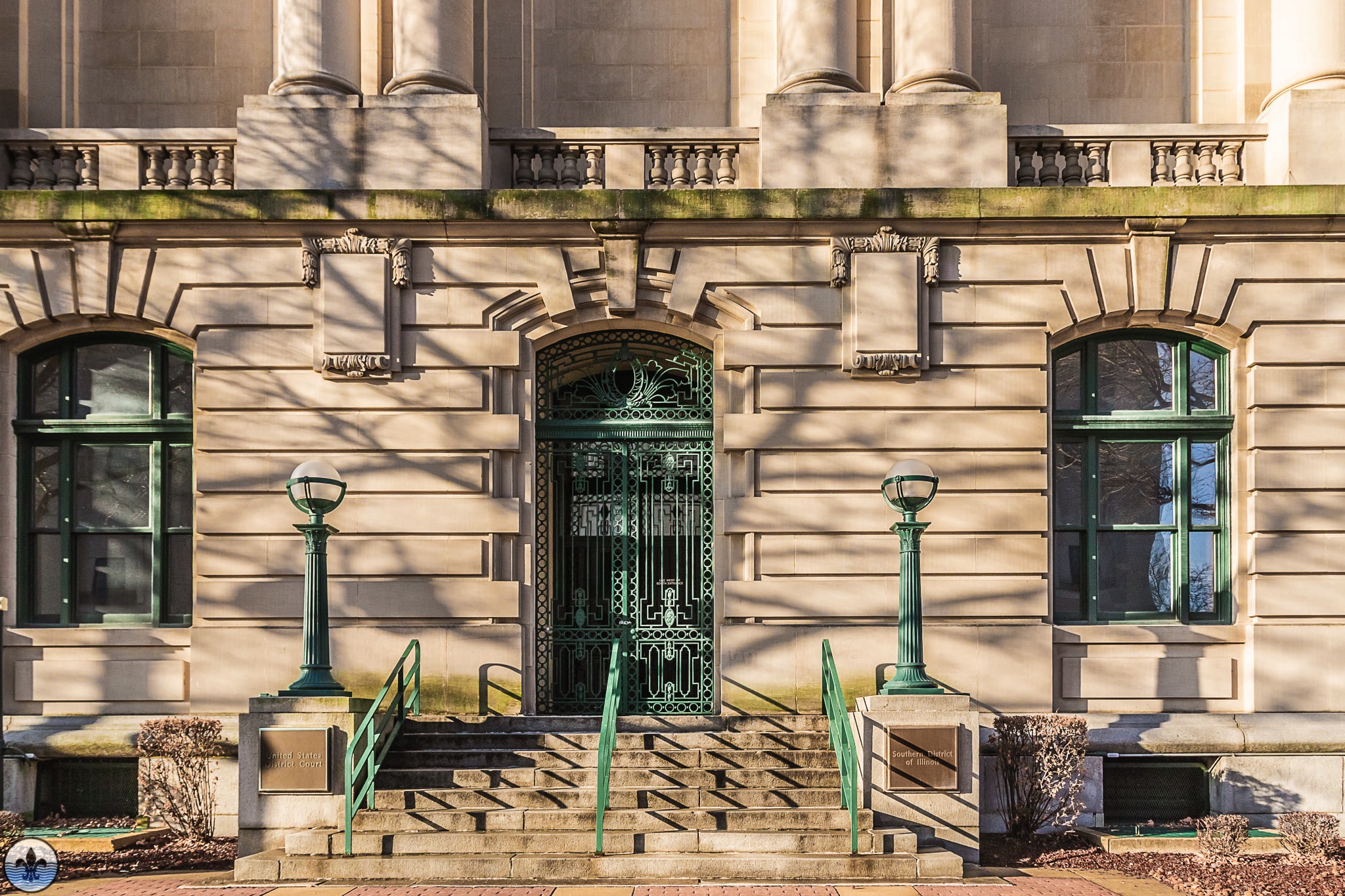 Then, as today, politics and industry were not as separate as they should be. Capitalizing on the manufacturing boom attached to World War I, city and industry leaders placed ads throughout the south soliciting new workers and proselytizing prosperity in East St. Louis. The result was a rapid influx of African-Americans, who fled Jim Crow persecution to relocate to the city. In less than 10 years, the city’s Black population doubled. This benefitted city politicians by hedging the ballot box in their favor, and industrial leaders by lowering demand for workers (and thus, lowering wages while increasing profits).

This also had the effect of promoting racism. White factory workers saw those new Black workers as actual or potential strike breakers (unknowingly, Black workers were employed as strike breakers for the Aluminum Ore Company), who were responsible for the broad tensions at work. They began to aggressively antagonize Black men, women and children within the community.

In 1917, this resentment against African-Americans spilled over into “reports” of their alleged violent behavior toward Whites (including robberies, armed assaults, and rapes- long the excuses for lynchings in the South). By July, a rumor had spread that a white police officer had been targeted and killed by a Black man. This led to a mob, estimated to be as large as 50,000 persons, that proceeded to move through the streets of East St. Louis’ downtown and “Black Valley” communities committing some of the most historically atrocious acts by civilians against other civilians ever committed upon American soil, and the worst acts locally since Francis McIntosh’s brutal death 80 years earlier.

From a St. Louis Post-Dispatch article of the time: “One section of the mob gathered around a lone negro on Fourth Street, near Broadway. A rope was thrown around his neck and he was hoisted up a telephone pole, but the rope broke. Men and women in the mob shouted gleefully as the negro fell into the gutter, while half a dozen men riddled his body with bullets. Negroes are lying in the gutters every few feet in some places.” Some additional descriptions of the atrocities included Black children being locked or boarded up inside buildings that were then set on fire. To escape, African-Americans had but two options- get to Ead’s Bridge, where St. Louis City police had formed a barricade to prevent the mob from chasing refugees across it, or to find some debris and float down the Mississippi River under the cover of night. Though only 35 deaths were officially attributed to the 1917 Riot (vs. LA’s 55 in 1992), the actual number slain is thought to have been 100 or more.

Following the Riot, reforms were made to local governance, and the city relatively stabilized until the economic crash of The Great Depression (when most industries temporarily closed). The city persevered and the population continued to grow year after year until after World War II, though never again at the rates prior to the Riot. In the history of this midwestern city, certainly the brutality of the Riot was a pivot point in communal harmony that ricochets through to today. 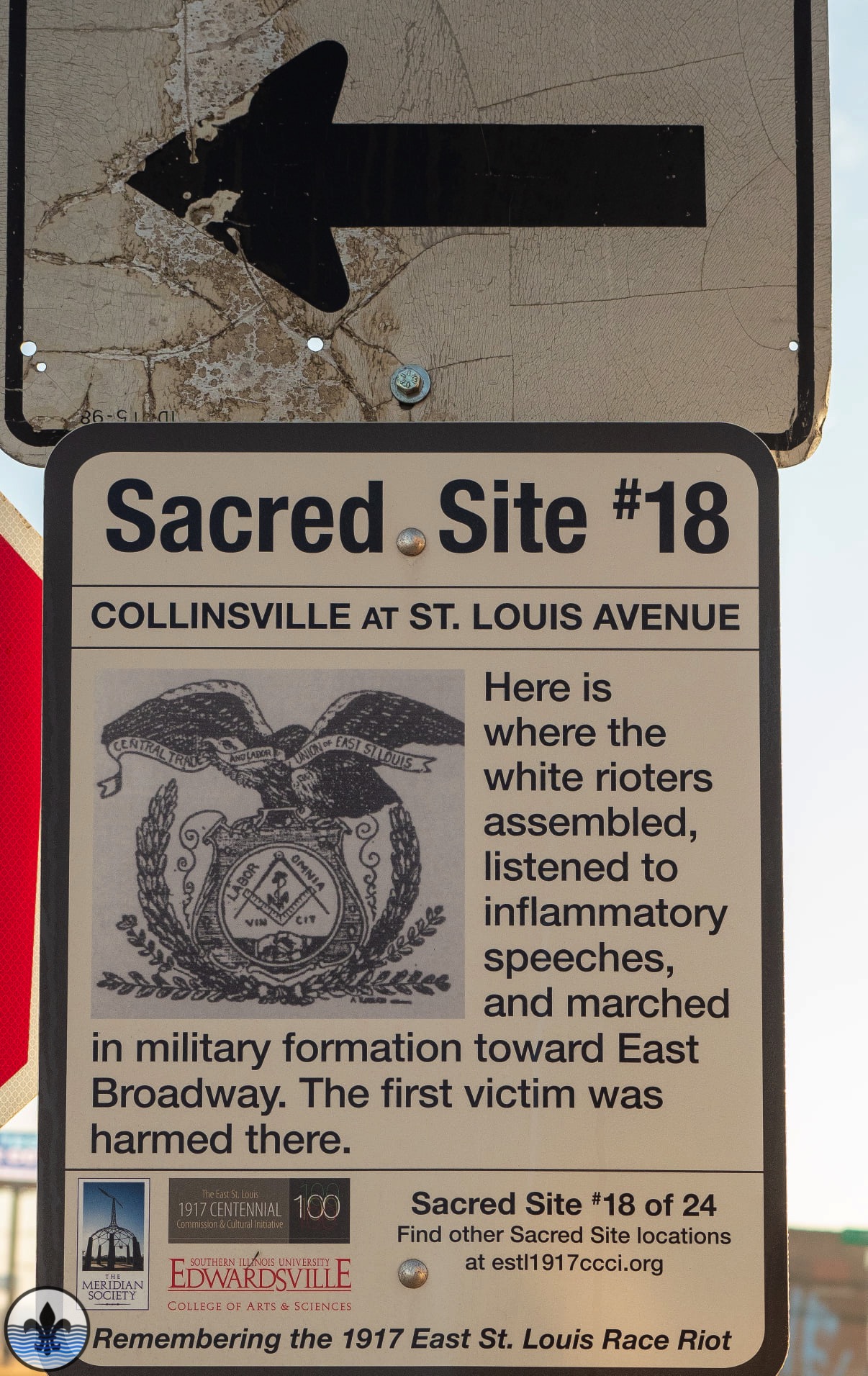 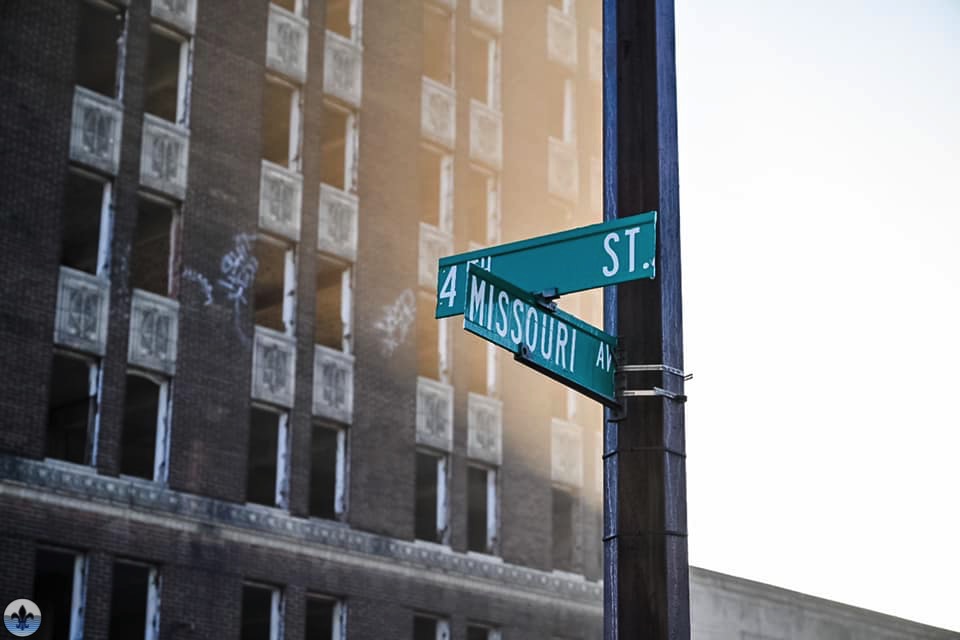 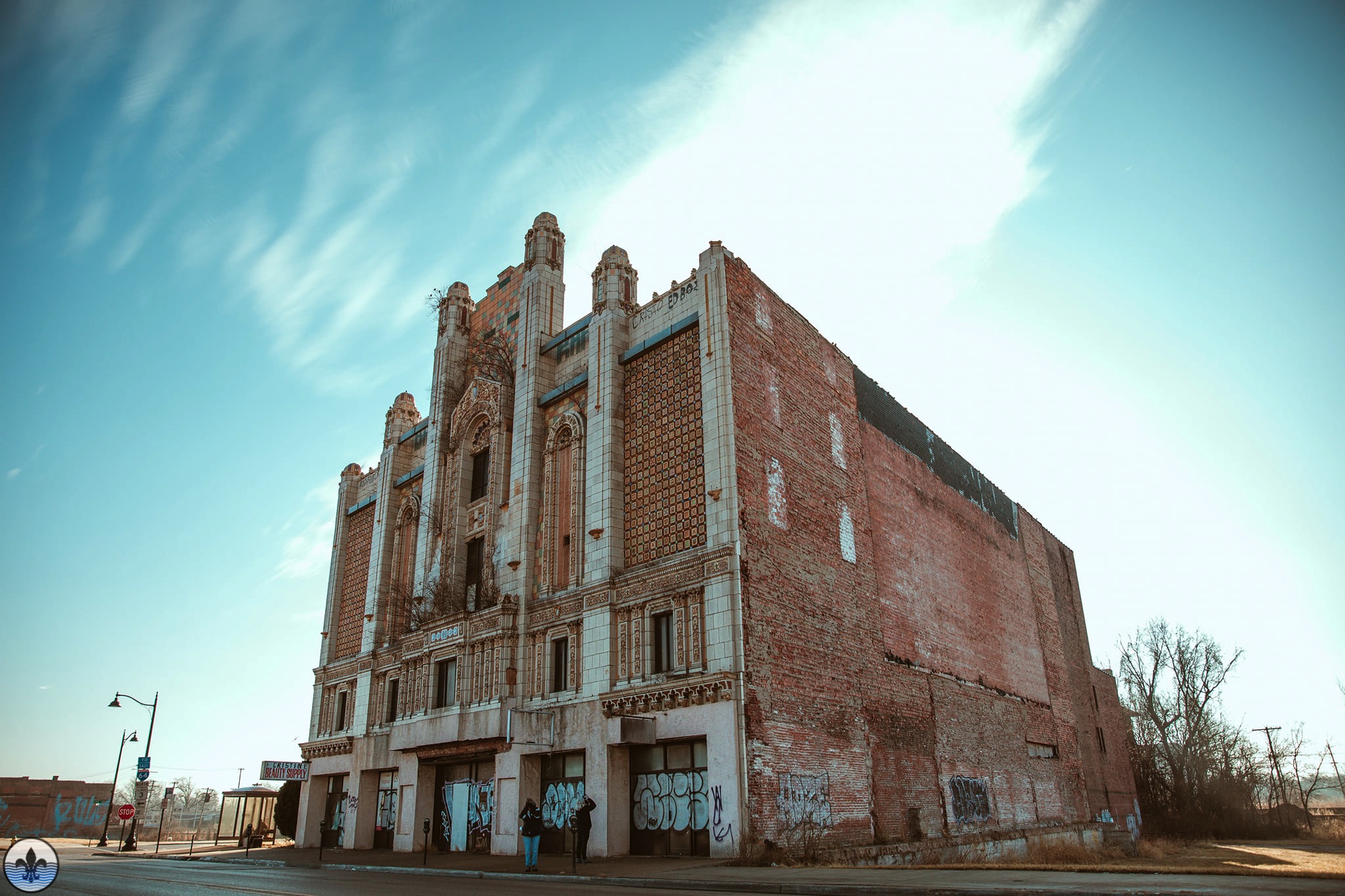 East St. Louis’ rapid rise was attributed to its successful industrialization, so it should be no surprise that its decline be attached to the city’s deindustrialization.

In 1959, the city was awarded the distinction of “All-American City” by the National Civic League. By this time in its history, East St. Louis had not yet suffered population losses in any census, and had recovered enough from its darkly racist turn to become host to a vibrant scene of African-American musicians and performers, including Miles Davis. However, the distinction was not enough to spare the city from the decline it would soon face as industry after industry closed operations throughout the 1960’s and 1970’s. Following these closures, old prejudices returned and Whites largely moved out of the city. The once prosperous river city became enmeshed in poverty, disinvestment, crime and controversy, and its population dwindled to its numbers prior to 1900.

Despite all of this, something interesting happened. In the 1960’s and 1970’s, African-Americans in East St. Louis began to band together under civil rights causes. This civic unity has inspired many East St. Louisans to achieve great successes in the arts, athletics, politics and academics, and is all despite those pervasive economic challenges that the city still struggles through. There is a pride and sense of attendancy to those who have called East St. Louis home, something that is reflected in projects ranging from public programs, like those offered through the Jackie Joyner-Kersee Foundation, to positivity boosters, like I Am East St. Louis Magazine. There is no doubt that East St. Louis has much to recover from, and some of the photographs in this article reflect that, but the 2020 census is expected to reflect that the city population has declined by the lowest percentage since 1960, and that is perhaps emblematic of a resurgence just below the surface. This is still a city of 26,000 people, which makes it more populated than any single neighborhood in St. Louis City, or to frame it next to another city suburb, almost twice as populous as Clayton. East St. Louis may be down, but it’s definitely not out. 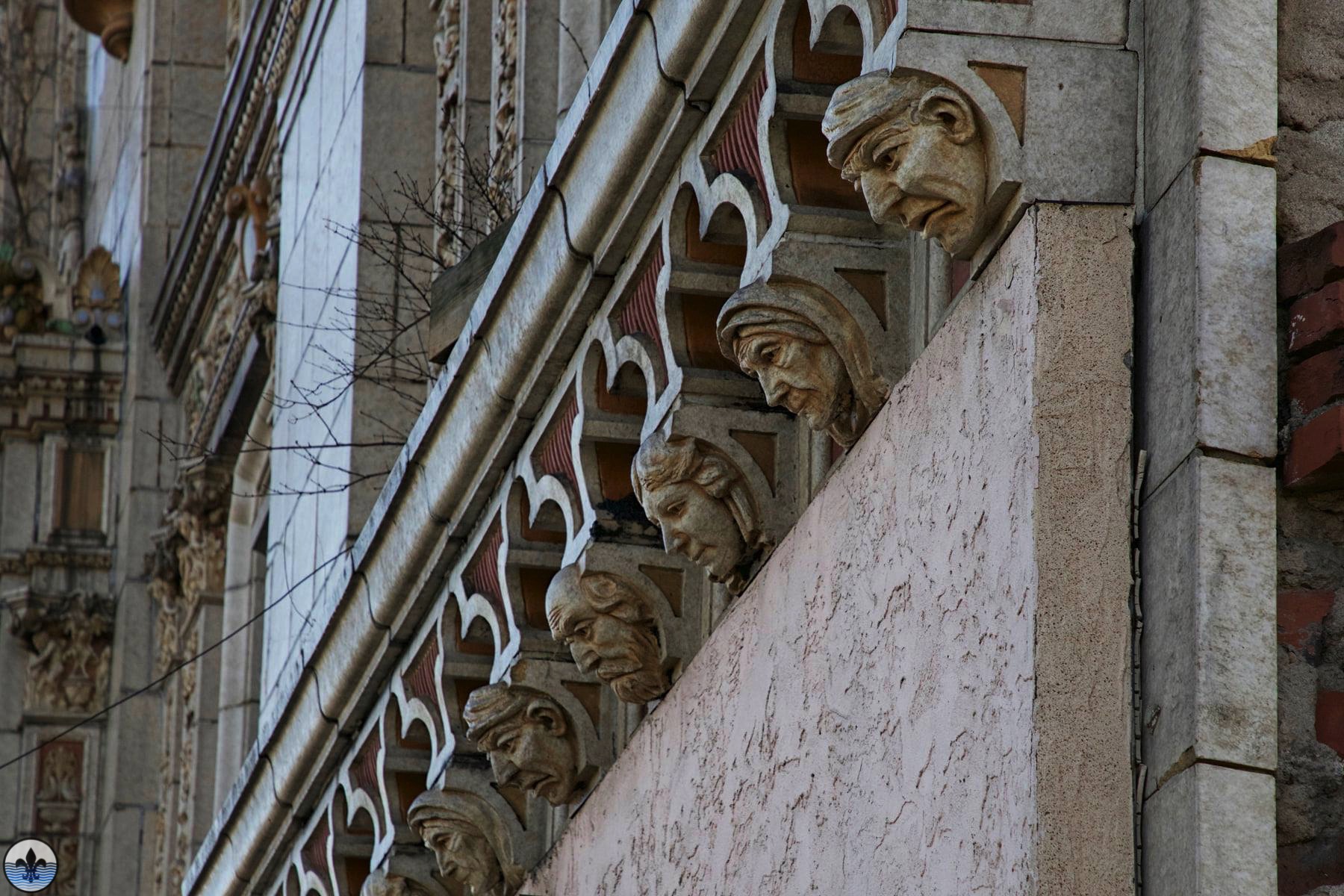 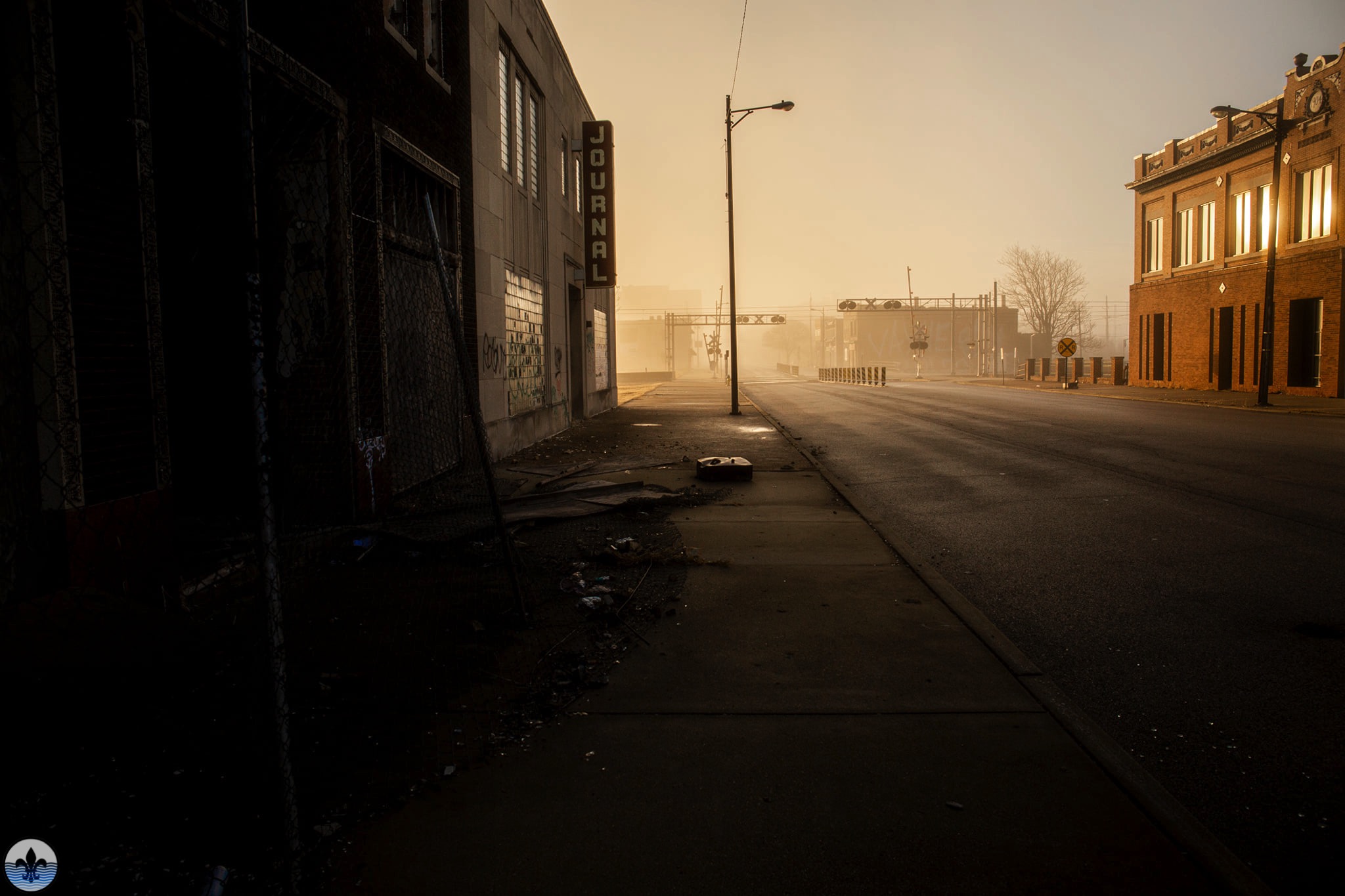